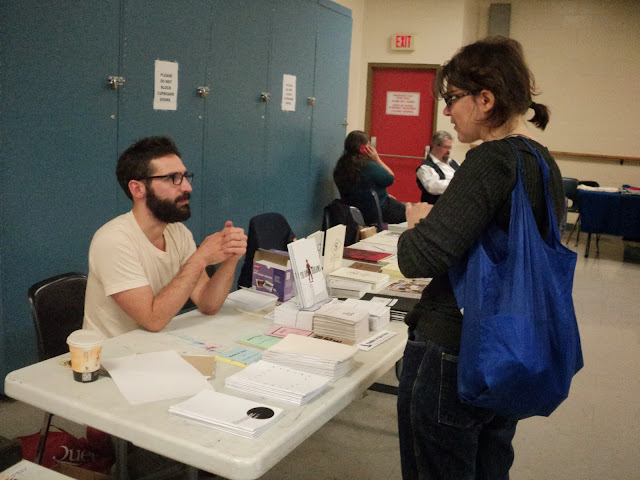 Finally, I’m able to get to the remainder of the items I picked up at this past fair [see my previous post on such here]. And, if you are interested, there were even twenty-nine interviews posted with exhibitors to this year’s fair, over at YouTube (myself included). I posted all the individual links to such over at the (Canadian) small press book fair blog.

Ottawa ON: What will jwcurry do [see one of my previous posts on him here] for his 1cent series now that the penny is being removed from circulation? I offered him a nickle, and received two copies of 1cent #403, “in lieu of review,” hand-printed in an edition of one hundred and forty-four copies on March 3, 2013. A few years ago, I composed an essay on jwcurry’s 1cent series for Open Letter, which can be picked up either through them, or through picking up my first collection of essays (in case anyone is interested), and I would recommend to anyone writing jwcurry directly to get copies of his recent catalogues of publications, including his collection of small press ephemera available through his apartment-filled bookstore, Room 302 Books (c/o #302-880 Somerset Street West, Ottawa ON Canada K1R 6R7).

The small publication reprints small pieces from other publications, which presume his endorsement of such, and include Sam Andreyev’s “the blue rock” from Evidence (Quattro Books, 2009), Nelson Ball’s “A Crow” from In This Thin Rain (Mansfield Press, 2012), Gerry Gilbert’s “SLOWING RAIN” from Counterfeit Pennies (http://gerrygilbert.posterus.com), an untitled piece from Frances Kruk’s Down You Go (Punch Press, 2011), Lance La Rocque’s “OPEN” from Vermin (BookThug, 2011), The Locust’s “New Tongue Sweepstakes” from Safety Second, Body Last (Jpecac Recordings, 2005) and Tom Walmsley’s “IN THE HOSPITAL ELEVATOR” from What Happened (BookThug, 2007), all published, as the title says, in lieu of review. As much as I love this small publication, I do miss his newsnotes publications, which is filled with his reviews, commentaries and conversations, and I can’t even remember when the last issue even appeared. When might we see a new one?

the dog in the lake

the top of his back

to shore then shook (Gary Barwin)

Puddles of Sky Press is a relatively recent publishing venture that has quickly evolved into a micro publisher worth paying attention to [see my previous note on him and his work here], producing small impressive items of incredibly condensed texts and concrete/visual poetry works, and this issue also includes a tiny chapbook of visual works by Ottawa poet Amanda Earl. Earl has also been producing increasingly interesting works over the past few years, from poetry to visuals to prose, and the results are striking. An aspect of the journal reminds me of the journal that Stuart Ross used to produce (and is hopefully still producing), his PETER O’TOOLE: A JOURNAL OF ONE-LINE POEMS, and, I suspect, even if Casteels isn’t working a direct homage, there is certainly plenty of overlap in their interest.