A mariachi band has just begun;
the cantinero muddles lime, ice and mint.
Is it industry, folly or perverse fun
to lounge here, behind my glasses’ darkly tint,
reading elegies in the sun? 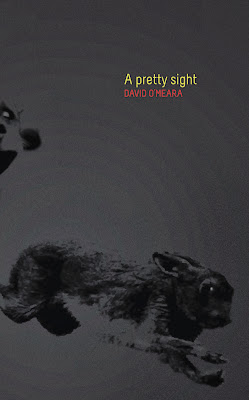 Ottawa poet, Plan 99 Reading Series organizer/host and bartender David O’Meara’s fourth trade poetry collection, A Pretty Sight (Toronto ON: Coach House Books, 2013), his first title in five years, is his largest to date, at slightly over one hundred pages. Following his poetry collections Storm still (Ottawa ON: Carleton University Press/Harbinger Series, 1999), The Vicinity (London ON: Brick Books, 2003) and Noble Gas, Penny Black (Brick Books, 2008), O’Meara has emerged as a poet of human awareness, contemplation and mortality, engaged in the metaphor-driven lyric and exploring the minutae of questions that have held the attention of philosophers for millennia. As he opens the poem “How I Wrote,” “You must change your life, but first, / wait a few minutes.” Opening up some of his previous structures, O’Meara plays more with form and the line in this collection than he has in previous works, as well as poems that stretch out in length, and also includes poems on some of his travels over the past few years, including “In Kosovo,” “‘That’s Where the American Helicopters Landed,’” and the poem “So Far, So Stupid” (“All those selfies I posted / look really great.”). I suspect his time as a bartender at The Manx Pub might have influenced the shorter, nearly throwaway poem “Umbrage,” the centre of which includes:

If a past disorder caused you trouble,
be it gastrointestinal, tooth or sinus,
if a privileged birth raise you in a bubble,
I’m afraid that’s no excuse, your Highness,

for the back-stabbing habits of an asshole.
If you’re really itching to put me in my place,
fine, let’s drop the gloves, and like Picasso,
I’ll happily rearrange your face.

The poems in A Pretty Sight provide a meditative, slow depth and weight, and perhaps more than a passing interest in the moon. “[T]he moon’s milky glow / hung in its pure potential. / stalled like those satellites of paper,” he writes, as the second-last stanza of the four-page “‘In Event of Moon Disaster’” poem. The poems in this collection, and, increasingly, in all of O’Meara’s collection, display an attempt to map and comprehend, whether it be the larger world, classical figures, pop culture, the future or even simply the musing of an evening stroll. “But I don’t forget, and don’t know why / the title haunts me;” he writes, in the poem “The Tennis Courts in Winter” (most likely the tennis courts at Gladstone and Cartier Streets), suggesting “it might have something to do / with potential.” And as O’Meara understands, potential can sometimes be a very dangerous thing.

Home-grown for extra income,
they’re warmed in the wait
of a standard light bulb
till the egg forms a worm, small
like a hair. Each one feasts
on mulberry, a month-long course
of shiny leaves, chubbing themselves
into a pale, lazy wiggle.

They wish to be a kimono cloud,
ball of fog, white
shrouds spun for their own ghosts
as they nod off to a creaking dream
of legs and wings. They wish
they were metaphor.

To let them stretch would tear
sleek work, so each cocoon
is dropped in a rolling boil, their
lives pinched out like fingers
on a match head.
The strands are reeled on a row
of spools,
and the cocoons jig and iridesce
until the corpse is undressed.