When you’re sick with fear you’re never sick with, or,

Sick with fear you’re never, or,

With fear you’re, or, 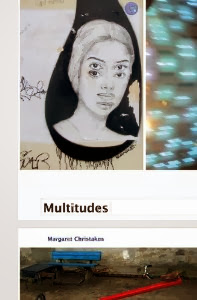 Toronto writer Margaret Christakos is easily one of our most daring, consistently inventive and deeply engaged contemporary Canadian poets, and has been for years, bafflingly overlooked for major awards for any of her poetry collections, eight of which have appeared in print over the past twenty-five years. Obviously, awards or lack-thereof have nothing to do with quality, but with her ninth trade poetry collection, Multitudes (Toronto ON: Coach House Books, 2013), one hopes that her work can start receiving the recognition it so badly deserves. Christakos’ Multitudes revels in polyvocal syntactic play, utilizing repetition, reorder and the abbreviated language of twitter to engage a poetry of social spaces, ranging from responses to Jack Layton and Lena Dunham to an engagement with the social and linguistic disconnect of social media itself. Christakos’ poetry has long explored fractures and connections, exploring the depths and multiplicities of disconnect, and Multitudes expands on her previous collections, striking a deep, dark chord at the very heart of how humans interact, and, at the same time, manage to keep as far apart from each other as possible. As she writes in the poem “FOUR YEARS IS IT”:

Christakos has played at reworking the language of her own poems within sections in previous works, pilfering and reordering pieces to twist in and turn around on each other, and Multitudes appears to take the structure in a slightly different direction, even as the subtitle(s) to the collection twists the title itself:

Constructed in nine sections, the first section, the poem “Threshold,” presents her opening salvo, giving a taste of what’s to come. As the poem opens:

push words into mouth.
do those words form a tongue or jetty?
is a probe formed that touches
the tongue it entangles?

push words onto mound of nipple,
onto mounded nipple jewels.
do words circulate as honey, as
tentacles that leaven and stiffen?

There is an immediacy and an urgency to the entire collection, boiling occasionally from a frustration that turns to anger, as she writes: “I realized then I was writing an Atwood poem from 1978. Nobody says how brilliant and mean she was, how shitkicking. She’d have known what to say, exactly what to do with that arm.” (“DIRGE URGE”).

Wavering on a stoop. The day doesn’t start yet. Days on end come to a stop. The water is all in the lake. Level rises, falls, but the lake is itself. Everything alive in the lake belongs. Anything incompatible immediately ceases to breathe. There’s a limit.

You don’t necessarily do what is strategic when moths fly into your lips. What if the mouth had been ajar. What if I’d swallowed that fly. Perhaps I’ll dive under the surface.

I was an old lady in the first dream. Then I woke to a hotel room with tartar sauce on my little finger. We’d had supper and fucked. I didn’t feel so old then.

Kids are obsessed with opening and shutting any door they find, rushing their shoulders through every portal. What happens that it locks? How will I escape? They spend a decade deciding which was to run then the walls close in. they’re smart. Days don’t end when they sleep.

Lake streams around the rockpoint the way you penetrated me in gladness. Crappy bedspread didn’t matter. We weren’t looking at the patterns. Wind reverses direction and heads out to the hillside way over there, by the hospital. That place is full of windows stuck shut. Bad air. You think twice about going in there for the X-ray. Maybe you’ll never come out.

The final section of the collection, “Play,” is “composed in real time” of status updates posted to Facebook, written quick in short bursts, and accumulate into an extended poem of twists and quirks akin to the short stories posted on Twitter by Arjun Basu or Adam Thomlison. One might presume that her chapbook that appeared last year, from Tumultétudes: The Chips & Ties Study (Toronto ON: BookThug, 2012) [see my review of such here], a selection from “Tumultétudes,” a longer work-in-progress, might be an extension of the new collection, composing a multitudinous study of the tumult and complexity of home, family and family health issues, with the musicality and compositional brevity and difficulty of the French étude. When one begins to work within a multitude, one can encompass everything and all, and the polyvocality of this new work extends out in all directions, held together as tight and taut as any highwire. Christakos’ work might be seen by some to be difficult, or about difficulty, but with such playful ease that it becomes impossible to not be swept up in her glorious music.
Posted by rob mclennan at 9:01 AM
Labels: Coach House Books, Margaret Christakos