Don’t be scared. Every airplane is a suspension
of disbelief, a merger of physics and faith.

Every airplane guides its housefly tongue
along a curving, snagless line. Its corridor of earth

is lined with lights. So don’t be scared:
let that crescendo of the engines be your trust

that nothing levitates on algebra alone. Subdue
the sputter of doubt. The bags are checked,

the brown men shackled to the ground; their secrets,
pulled like rotten teeth, are yours.

As is the sky, swept clean by searchlights, emptied
even of the moon, the stars. 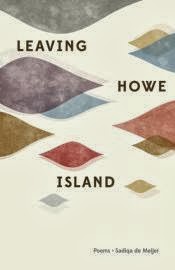 From Kingston, Ontario poet Sadiqa de Meijer comes the poetry collection, Leaving Howe Island (Fernie BC: Oolichan Books, 2013). This first trade collection includes her 2012 CBC Canada Writes Poetry Prize award-winning sequence, “Great Aunt Unmarried.” I must admit, it has been so long since I’ve seen anything from Oolichan Books (they produced an impressive Robert Kroetsch title circa 1980, but I can’t recall much else they’ve published) that I’d forgotten they even existed. What have they been up to, I wonder? Constructed out of two sections – the poem/suite “Great Aunt Unmarried” and “There, There,” a longer section of individual poems – Leaving Howe Island is a rich, deep first collection, one that manages to hold together through the deft hand of craft, and her attention to the smallest details. There are far too many similarly ambitious and dense works that fully collapse beneath their own weight, but de Meijer manages to balance this out through a considerable lightness. Sometimes she even distracts us with the pure simplicity of her lines, as she opens the poem “Saint John,” “You say to the ocean, we’re here.”

You say to the ocean, we’re here.
Windshield frames the subdued sloshing
of the harbour. Chain link, guardhouse,

a cruise ship whiter than seagulls.
Salt and molluscs in our noses. Hours
down asphalt flanked with moose-fence,

thin coffee from lukewarm machines, for this
gray comforter, this wordless report
of mackerel and lantern fish,

remote, familiar strands. A man
in a windbreaker leans in your window
to ask, where in Ontario? He came here

to retire. Says Sure was a good move.
Scarborough’s too full of – squints at me, sucks
down the words – Your neighbours

look out for you here. He nods his cap,
limps smaller in the sideview mirror.
The engine ticks. Your grin

is sore. I’m invulnerable, because
my hand is on my belly. Five months.
Kicking a jig, elated, without theory.

The work that won the CBC Canada Writes Poetry Prize, “Great Aunt Unmarried,” is a sequence of poems that write using and utilizing a story as opposed to directly retelling, managing to use the story itself to do something further with the writing. The story exists as fodder, sometimes backbone, and other times, completely incidental to the mortar of an impressive sequence thick with suggestion, inference and history, a deeply tangible imagery and a weighty language, writing: “Seconds when she flickers / in the lantern of a stranger— / coarse eyebrows, slow douse / of a grin. I’m kinder then.” Another part of the same suite of poems reads:

We went for a drive in nature. Two of them tied ivory
kerchiefs around their home permanents while the third
muttered a curse on vanity, and we folded into a sedan,
automatic for the rheumatisms. At the speed of a procession,
to the dissolution of chalk peppermints. Here, the middle sister
nodded to the shoulder. Lawn chairs emerged. From the ditch,
the road was hearsay. Buttercups towered over a far spire.
The three in bifocals, their hands on the slacks
trembled like the grass. To the south, the air force was practicing.
Whether that haunted or comforted them, I couldn’t tell.
On the drive to the house, the silence had a grander shape,
like a bell that fits over fields and villages, and schoolhouses
and sugar beets and people. (“Friesland”)

Deeply personal, writing on family and domestic matters, the connections and dislocations of home and away, de Meijer’s poems are playful, serious and considered, contemplative and high speed, moving quickly and for a long time, linger. I’m impressed by these poems, and just how quietly mature the collection stands. How does she manage such tightrope lines?
Posted by rob mclennan at 8:31 AM
Labels: CBC Poetry Prize, Oolichan Books, Sadiqa de Meijer

Wonderful review! But ya know, re Oolichan, they published last year's winner of the Gerald Lampert award for best first book of poetry, and it was really excellent. It's called Sweet Devilry, by another Kingston poet, Sarah Yi-Mei Tsiang...