I had not known it, but I lived
inside my mother’s head—her face God-like,
white, a cast. Neck coiled in a snake,

ready to strike. My own eyes
slits beneath the heavy chalked lids.

How did I come then,
to haul myself up the scaffolding she’d left,
fist after fist, to crawl and stretch—
the glowing oval of her mind
hanging like a moon above me.

I cracked the crown—
pressed out and through, black bird
singing in my chest,

no light, no breath, my voice
still clinging to her lips. (Emily Kendal Frey) 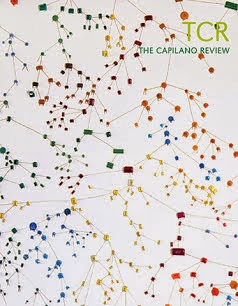 I try to keep away from discussing issues of journals I’m actually in, but the new issue of Vancouver’s The Capilano Review is too good to not at least say something, with new work by (among others) Sylvia Legris, Emily Kendal Frey, George Bowering and Jesse Grey, collaborations by Ray Hsu and Michael Park, as well as an interview Robert McTavish conducted with Charles Bernstein, “Undone Business: Charles Bernstein on the 1963 Vancouver Poetry Conference.” For those who might not be aware, documentary filmmaker Robert McTavish has been working on literary subjects for some time, including a documentary he did on the late poet John Newlove, as well as editing Newlove’s selected poems for Chaudiere Books. More recently, McTavish released a documentary he produced on the infamous 1963 Vancouver Poetry Conference, The Line has Shattered: Vancouver’s Landmark 1963 Poetry Conference (Non-Inferno Media, 2013), deliberately appearing just in time for the fiftieth anniversary of the conference. McTavish recently said that he had far more material than would ever fit into the documentary itself, and it seems that he’s started working to place some of that research in literary journals, which can only broaden any scope of articulating the significance of the historic conference (I can only hope that other interviews begin appearing soon in further venues). The interview opens:

Robert McTavish: You’ve got the 1963 Vancouver Poetry Conference recordings on the PennSound site. Does it have a profile, to people here in America?

Charles Bernstein: America! Sure, I mean, I think those interested in the New American Poetry know about the Vancouver conference. Don Allen’s anthology, The New American Poetry, came out just three years before the Vancouver conference. Famously, for those few for whom anything about poetry can be famous!, the anthology included different configurations of poets: the Beats, which would have included Ginsberg and Kerouac and Burroughs, who were represented at the conference by Ginsberg; the so-called Black Mountain Poets, which would have been Creeley and Olson, two very different poets but affiliated; and the San Francisco Renaissance, which would have been Duncan at the conference but also Jack Spicer and Robin Blaser, and Whalen too. Vancouver ’63 and Berkeley ’65 are milestones in the history of the New American Poetry. It’s also very important to me as somebody who was in Canada early on in my life and had a deep connection to Canadian poets and also who has a great interest in, and knowledge of, the relationship between the US and Canadian poets. Seen the other way around, of course, the Vancouver conference was pivotal to the reception of US poetry within Canada through the TISH group. It’s a crucial point of contact. From a US point of view its significance is more tenuous, but it is one of the key events of New American Poetry, along with the Berkeley conference, Black Mountain College, the first reading of “Howl” in San Francisco, and the like. It’s fascinating that these poets came together in Vancouver when they were so young and relatively unknown. A number of interesting Canadian poets came to the conference and as far as US poets go, it was important for Michael Palmer and Clark Coolidge, which makes it important for those of us who greatly admire their work. Coolidge and Palmer connected up to the New American Poetry in a more visceral way through that conference and remained connected to it throughout their lives, though I don’t have much evidence that they connected up to Canadian poetry.

The issue also includes a selection of works from an exhibit curated by Michael Turner, A Postcard from Victoria,shown at the Art Gallery of Greater Victoria, May 2 – July 7, 2013. Featuring Robert Morin and Lorraine Dufour’s video A Post Card from Victoria (1983), the show included new postcards Turner commissioned for the exhibit by artists Raymond Boisjoly, Geoffrey Farmer and Julia Feyrer, all of which respond in some way to the original sixteen-minute film. Turner’s introduction moves from the history of the postcard to the show specifically, “an immersive exhibition,” as he writes:

The final element in the exhibition, near the west wall, is a carousel that includes postcards that were for sale when Morin and Dufour made their video, interspersed with recently-commissioned postcards by artists asked to “interview” the video (just as the Northern English woman was interviewed by the owner of the cottage). The resultant postcards reflect the eerie quality of Morin and Dufour’s work (Did you notice that when the maid pours the cottage-owner her tea, nothing comes out?). Raymond Boisjoly provides a lurid image of the video scanned from his smart phone; Julia Feyrer a staged still-life that implicates an infamous Victoria-set book from 1980 on satanic cults and repressed memory (Michelle Remembers); and Geoffrey Farmer a drawing of a ghost-like figure seated “within” an appropriated drawing of Anne Hathaway’s Cottage at Warwickshire, England.

On top of that, there’s new fiction by George Bowering, and stunning new poems by Sina Queyras, Emily Kendal Frey and Sylvia Legris, and nearly too much to actually discuss in a single post. There is something about Sylvia Legris’ work that is getting richer, deeper and more complex. I haven’t seen much since her Griffin Prize-winning collection, save for a recent title through New Directions [see my review of such here], but her work, already incredibly dense and powerful, is somehow improving. How does that happen? She has three poems in this new issue, triggered by sketches by Leonardo da Vinci—“Details of Articulated Skeletons, c. 1510,” “The Anatomy of a Bear’s Foot, c. 1488-90” and “A Skull Sectioned, c 1489.” The second half of the poem “The Anatomy of a Bear’s Foot, c. 1488-90 / (after Leonardo da Vinci)” reads:

Terricolous, the pre-anatomized bear’s bearing toe-in, direct-register, a
stomp-walk to mark scent (the soul that dwells within that architecture … a
thing divine…).