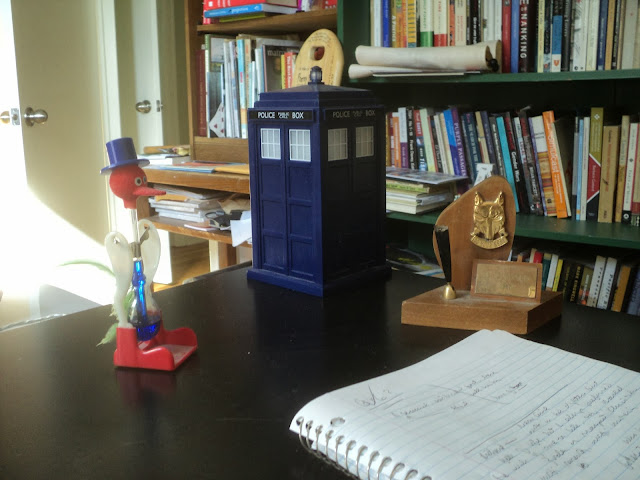 [writing desk in new house, with some of my familiars…]

I know you’re excited for the Ottawa small press book fair, now nineteen years old (if you can believe it), and the pre-reading the night before. And don’t forget, anyone who subscribes to above/ground press before November first ALSO receives these brand-new titles by Rae Armantrout, Carrie Olivia Adams and Hailey Higdon!

And note that Christine McNair will be reading later this month at IFOA in Toronto,where I will be tagging along as her plus-one. Might we see you there?

Montreal QC: New from Montreal writer Nicole Brossard is the chapbook A TILT IN THE WONDERING (Montreal QC: Vallum, 2013), fifteenth in the “Vallum Chapbook Series.” It seems interesting that the chapbook wouldn’t list a translator, suggesting that the author either composed the pieces in English or did her own translation (I would lean toward the former). I’ve seen a couple of dozen of Brossard’s works over the years, but am unaware of her previously composing either poetry or prose in English, and I’m intrigued by how she works with the two languages, slipping a French word, phrase or stanza into this predominantly English work. Is there a difference, I wonder, in her thinking through poetry from one language to the next?

over my head
Lyrid meteors flying following
a universal thought with no
translation. I said:
can’t live with non-written words

Of the sixteen-page, sixteen-poem chapbook, the work opens with a scattering of fragments and individual pieces that cohere into a single poem by the mid-point of the collection. The centre poem, the five-part, five-page “HALF-WAY” begins to pull the opening, disparate fragments together, helping to shape into a larger structure, with the following pieces numbered from 13 to 16. What emerges is a poem on lexiconography, and the value of what is against what isn’t written down, structured in an absolutely magnificent, startling and subtle way, sweeping the fragments that open the chapbook into, by the end, a solid sequence.

Toronto ON: BookThug seems to favour the occasional chapbook as Canadian edition of an item previously produced by an American publisher, as they did previously for a title by New York poet Lisa Jarnot. American poet Dot Devota’s The Eternal Wall, which originally appeared with Cannibal Books in 2011, has been rescued from out-of-print status through a new edition, newly out from Canadian publisher BookThug.

A doctor keeps silence occupying air
until it blisters. Schoolchildren stick out
their tongues, petals of bougainvillea
insulting cobblestone in a colonial town
where a maid in the villa
opens blue velvet and finds
diamonds an American
family left behind.

The word tyranny attacks my tongue.
Hair singed at the temples. A secular peace,
a brick of ice
thrown into a tearful building—

As “A Note on the Text” at the back of the small collection reads:

During the Lebanese Civil War, Malika Hamadeh escaped with her eldest daughter from their town of Baakleen in the Chouf Mountains to the Syrian border by taxi. The taxi driver was a man from their village. The road was under heavy fire and people attempting to flee were targeted. Decades later, more fighting ensured and Malika’s eldest daughter was forced to leave again, this time with her eldest daughter—Malika’s granddaughter. They took a taxi, driven by the son of that man from their village who, years earlier, helped them escape the same route down into the desert of Syria.

In the summer of 2009, I lived in Baakleen with Malika and her family in a five hundred year-old castle, built by their ancestors on the rim of a mountain above a fig orchard. Each night fog invaded the orchard and made sweeter the figs growing there. I came to know the family through Malika’s youngest daughter, Abir Ward, whom I first met in Beirut. At the time I was reading a newly translated collection of poems by Nadia Tueni titled Lebanon: Poems of Love and War; the late Arab poet happened to be Malika’s cousin. Abir took me, a foreign stranger, back to live with them. I slept in a room where previously a bomb had fallen through the ceiling above the bed and exploded. It was here I originally discussed my poems with Matt Henricksen, a poet and friend back in Arkansas, who, with his wife Katy and through their press Cannibal Books, was publishing the first, and I thought only, edition of The Eternal Wall.

As a westerner walking into someone else’s war zone and writing poems can be a complicated and even troubling thing, but Devota’s poem/chapbook takes careful steps in certain directions, and reacts with pure response in other directions. In a series of poem-fragments, most titled “The Eternal Wall,” Devota opens up a series of small moments, questions and responses that intrigue. Is there more to this work, possibly, or is this entirely self-contained, I wonder? The chapbook opens:

I spit. And think about leaving the country.
Sadder than the sun. Leave
the country. For the sun’s
approval. A bright masochist
whose eventual fall-out
is a quiet satellite deflecting flares. A promise
is or isn’t
an explosion—

No. I’m not
confident, but someone who grows
out of No
will become its convict. That bog
of beginning with No.