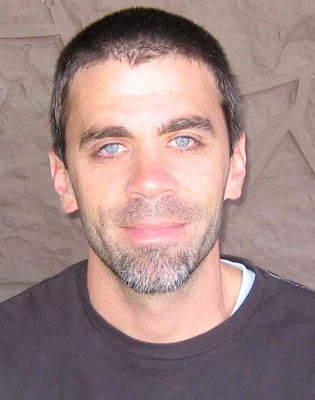 1 - How did your first book change your life? How does your most recent work compare to your previous? How does it feel different?
My first book changed my life in that it seemed to make official--for me--writing as a vocation. I would say profession, but there was no money involved, which seems to be part of the definition of professional. I’ve been working on a four book project for over 10 years--three of those books are completed and have been published--so there’s a continuity across those poems. More recently, I think my poems are becoming a bit more lucid or articulate, maybe. Having kids has made me look at experimentation a bit differently: as a way to access things, I think, whereas previously I think I used it more to hide things. So I hope my more recent writing is a bit more open in some way. There’s some part of me, however, that feels like I write the same poem over and over, trying futilely to get it right. I think that’s a George Oppen idea I’m mangling there.

2 - How did you come to poetry first, as opposed to, say, fiction or non-fiction?
I didn’t, really. I came to short fiction first, under the spell of one of my undergrad teachers, the amazing novelist Joseph McElroy. Even now, story is always there, like a god: whether I believe in it or not, I’m always grappling with it, running toward it or away from it. Or both. If I had the skills, I’d likely write similar to someone like Laird Hunt, in his marvellous collection The Paris Stories.

3 - How long does it take to start any particular writing project? Does your writing initially come quickly, or is it a slow process? Do first drafts appear looking close to their final shape, or does your work come out of copious notes?
Starting usually comes fairly quickly; things just kind of sneak up on me. But I’m terribly slow after that. And I’m an unbearable tinkerer. Someone once said to me that nothing is ever done--I can’t remember who--and I seem to have swallowed that wholesale. I feel the need to perpetually apologize to all the great people who’ve published my writing & had to suffer through this trait of mine.

4 - Where does a poem usually begin for you? Are you an author of short pieces that end up combining into a larger project, or are you working on a "book" from the very beginning?
Very often things start with a phrase for me--some interesting fragment of language I come across. On occasion, larger book ideas take shape from things I’m reading. Something I’ve recently “finished” (see previous question) came out of reading Maggie Nelson’s Bluets and Kate Greenstreet’s The Last Four Things back-to-back on trains to and from work.

5 - Are public readings part of or counter to your creative process? Are you the sort of writer who enjoys doing readings?
I love doing readings. For me, they are a kind of ultimate test of the language of lines of poems (vs. the ideas). Standing in front of a room full of people makes me hear things in a way I can’t simulate any other way.

6 - Do you have any theoretical concerns behind your writing? What kinds of questions are you trying to answer with your work? What do you even think the current questions are?
I have to admit, I’m not much of a theory person. Certainly not consciously. And I never really try to articulate whatever theoretical concerns I happen to come upon. I often think it’s a limitation--my lack of theoretical underpinnings--but it’s a language that I don’t quite ever seem to know how to think in or speak.

7 – What do you see the current role of the writer being in larger culture? Does s/he even have one? What do you think the role of the writer should be?
In lieu of a genuine answer I will offer a paraphrase from David Markson’s novel, Wittgenstein’s Mistress. The narrator, herself an artist, says something like, I realized that I could sooner imagine living in a world without people than I could imagine living in a world without art.

The universe and all its zillion components produce energy and need to do something with that energy. For me, writing is that thing. Whitman’s “barbaric yawp,” maybe, which I believe keeps the world from being barbaric. The day after the shooting in Newtown, Connecticut, I took my son to his first movie-theater movie: Spike Jonze’s adaptation of Where the Wild Things Are, which broke my already-broken heart that Saturday, because it’s gorgeous and seemed entirely to be about the universal need to do something with the energy generated by being alive and having experiences. And the need to have people with whom to share those things.

8 - Do you find the process of working with an outside editor difficult or essential (or both)?
I find it essential. I’m an advocate of thinking, so two heads are always better than one for me, even if that can be difficult at times.

9 - What is the best piece of advice you've heard (not necessarily given to you directly)?
I’m paraphrasing again, but recently I heard Marshall Allen, a long-time member of Sun Ra’s Arkestra talk about practicing and playing a piece over and over for Sun Ra and how Sun Ra told him that he’d mastered the piece but hadn’t found the spirit in it. Ra told him to just play it, to feel the music and find the spirit.

10 - How easy has it been for you to move between genres (poetry to critical prose)? What do you see as the appeal?
Not easy at all. I’m terrible at critical prose. As a reader I’m like a kid in the front row getting sprayed with band sweat. I fall in love with poems and poets and I’m rubbish critically. In classes I teach I often find myself summarizing or paraphrasing critics who are much smarter than I am, and then I bludgeon my students with long discussions about punctuation marks and single word choices. Alas.

11 - What kind of writing routine do you tend to keep, or do you even have one? How does a typical day (for you) begin?
Since having kids, I have both less of a routine and more of one, by which I mean that the days of reading for hours and then writing and then watching multiple episodes of Deadwood or The Wire are largely gone. But I’ve become much more efficient in terms of using time, and whenever time becomes available, I tend to set it aside for writing, which is great, even though my house is often in a shambles as a result.

12 - When your writing gets stalled, where do you turn or return for (for lack of a better word) inspiration?
Walking. My wife gave me a medal with a labyrinth cut in it and it says, solvitur ambulando (“it is solved by walking”). I think that’s written in my DNA. And always to books, as predictable as that is. Different ones, depending on the state of things. If I grab If I grab Fernando Pessoa’s The Book of Disquiet or Evan S. Connell’s Notes Found in a Bottle Left on a Beach in Carmel things are getting bad.

13 - What fragrance reminds you of home?
The smell of dogs.

14 - David W. McFadden once said that books come from books, but are there any other forms that influence your work, whether nature, music, science or visual art?
Science, even though--or perhaps because--I’m a simpleton when it comes to science. I am awed by science and by language, so the former often leads me to the latter. And both cause confusion, which is always generative for me.

15 - What other writers or writings are important for your work, or simply your life outside of your work?
There are scores of contemporary writers--especially the current bumper crop here in the Philadelphia area, where I have the great pleasure of living and writing and being among these great and varied folks. George Oppen is always important to me, as a kind of elusive spirit. I can feel the flood gates of names flying open, and I don’t want to bore people, so I’ll stop there.

16 - What would you like to do that you haven't yet done?
Write a GREAT poem.

17 - If you could pick any other occupation to attempt, what would it be? Or, alternately, what do you think you would have ended up doing had you not been a writer?
If we’re talking semi-realistic, I would love to own a food truck. If I hadn’t become a writer I would likely be a New York City Police Officer. It’s kind of the family business. (Though unlike my forebears, I would have been terrible at it).

18 - What made you write, as opposed to doing something else?
Confusion and shyness. And that sense, like a lot of other people have, that there must be another way to live.

20 - What are you currently working on?
As far as writing goes, I’m finishing up a manuscript made up of two long-ish poems, one sort of about stuttering--but really about articulation, I guess. And the other is about hearing--about memory--and it thinks about the ear and its capacities, and sound as a kind of image and something that moves me.