Juliana Leslie, Green Is for World 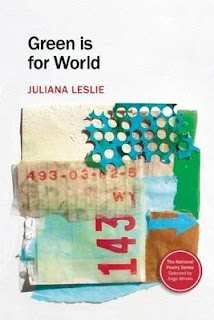 Selected as part of the National Poetry Series by Ange Mlinko is Santa Cruz, California poet Juliana Leslie’s second trade poetry collection, Green Is for World (Minneapolis MN: Coffee House Press, 2012), a follow-up to her More Radiant Signal (Chicago IL: Letter Machine Editions, 2010). Throughout the collection, Leslie continues her fascination with colour, with tight lyrics and the occasional prose poem, and an articulation of the boiled-down essence of abstract things, mapping the less-explained. As she writes in the piece “Poem with Moveable Parts”: “democracy sends its flowers / into space / and space waits / to be covered gently / by paper.” According to some of the press clippings that come with the book, this collection corresponded with the beginnings of her study into the long poem. The blog of the Poetry Foundation, Harriet, reposted an article on Leslie from the UC Humanities Forum at UCSC, that includes: “In 2010 Lettermachine published Leslie’s 83-page More Radiant Signal, a collection of poems she worked on from 2001-2007. The poems in Green were completed in 2008-2011, the years she began her study of the long poem. For Leslie, the divide between a critical study of a poem and the way it can influence her creative work is blurry.” As Leslie includes in her “Author Statement”:

In the process of writing the longer works, I relied on source texts such as William Carlos Williams’ Paterson, Hugh Kenner’s The Pound Era, and Norman O. Brown’s Apocalypse and/or Metamorphosis. These texts describe and witness in various ways how the process of writing in a lyric mode is difficult without acknowledging the modes of historical consciousness and understanding that emerge in the twentieth century. As a result of studying the long poem for my dissertation research, I have also found it impossible not to write poetry without acknowledging these transformations. As a result, the technique I used to capture these tensions and pressures was collage, which is probably most notable in “The Age of Parts.” While the rhetorical effects of collage usually produce contradictions and juxtapositions across lines and convey instability and collapse, I am also interested in collage as a kind of visionary or metamorphic medium. The modernist practice of collage at its inception registered the contradictory status of knowledge and the emergent status of poetry as a way of relating to and understanding how the world is put together. I use this technique to speak back to a world that seems to be persistently in ruins and an effort to show how these ruins are generative and enabling.

Leslie’s poems have a lovely, meditative edge slipped in, composing poems that meander with purpose, and a narrative “I” that floats in and out of authority. Sometimes the “I” is as an anchor, and other times, simply a point in the centre for the poem to swirl around. There are some intriguing moments, including her repetition of the word “shipwreck” a couple of times throughout, or her centre that shifts (as in the poem “Something about Finches”) into “An X in the center laughing.” Green Is for World does include some longer sequences, including “That Obscure Coincidence of Feeling,” “Margaret Fuller,” “My Name Is Helen” and “The Age of Parts,” that opens:

There were deeper colors
more flexible wool
I chorused beneath
I begged each zipper
in each Virginia
I said
I am sorry
No one smiles in a diver’s throat
No one looks out from the inside
and asks, am I calling
Is this the place
a pilot beacons?
My good intentions rain
in buckets from a dome

The shift from smaller, individual poems into the occasional sequence is an interesting one, and one that could easily have come with an increased confidence as much as her dissertation research into the long poem. The intricate smallness of her poems don’t necessarily shift, but in sequences, the smallness increases, allowing moments to lengthen, and small moments to become smaller, and more formed, allowing the sequence to hold into a shape far more complex than her previous structures had allowed.

One of the finest poems in the collection has to be the sequence “Margaret Fuller,” ostensibly a poem on Sarah Margaret Fuller Ossoli otherwise known as “Margaret Fuller” (1810-1850), an American journalist, critic, and women's rights advocate associated with the American transcendentalism movement. Apart from the pure pleasure of language, sound and movement through the ten-part sequence, the poem is a highlight simply for the way Leslie incorporates ideas and abstracts as opposed to pure biographical facts, as so many other poems on historical figures insist upon. If nothing else in the entire work, Leslie should be applauded for such a magnificent poem. The first section reads:

I am that stranger
walking through

and your terse
your bold and nervous

humble acts and propositions
You may call me a woman

of modest steam in her time
I am printed matter

I am almost a sonnet
and hitherto defended