The World is Moving Around Me, Dany Laferrière

People move through the streets, hoping to come across a family member, a friend, a neighbor, or even an acquaintance: someone to legitimize our claim to be among the living. We’re zombies until someone calls our name. The person no one has seen could well be dead. Meanwhile, that other person thinks you’re dead, though he hopes to see you alive. There’s no way of knowing where death was waiting when you were at that particular place. Some people did all they could to show up at the meeting. Others walked away from the fatal spot a few seconds before. And to think we had no idea we were playing heads or tails with our lives. I left Télé-Ginen to get back to the Hôtel Karibe by five p.m.—but it could have been the other way around. A game of musical chairs the entire city was playing. There were a lot more people than chairs when the music started. You had to find an empty chair when it stopped at exactly 4:53 in the afternoon. 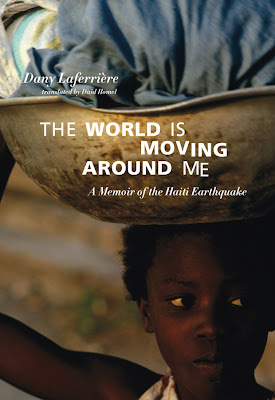 It would be impossible not to be moved by The World is Moving Around Me: A Memoir of the Haiti Earthquake (Vancouver BC: Arsenal Pulp Press, 2013), Montreal writer Dany Laferrière’s first person account of the January 12, 2010 earthquake in Haiti and its aftermath. When the earthquake struck, Haitian-born former journalist Laferrière had just ordered dinner in a restaurant in his hometown of Port-au-Prince, and he ends up note-taking observations of the following two days, before the Canadian embassy flies him back to Montreal. It is a terrible thing to see one’s own country torn apart, but Laferrière’s memoir, however brutal in description, includes incredible accounts of bravery, sadness, optimism and grief. Written in a sequence of short vignettes, The World is Moving Around Me is a deeply personal account of the tragedy, and the surrounding histories of Haiti, which I hadn’t realized I knew so little about. Laferrière writes about friends lost and found, and the heartbreaking tale of his friend Marcus, who loses his wife, but heads immediately back to work, to cover the story.

Laferrière is adept at writing the tragedy in real time, exploring the way his countrymen weathered such tragedy with grace, and how international media held on too tight to the desolation, catching little to nothing of the spirit of the people. Translated into English by David Homel, who has translated a number of Laferrière’s fourteen novels, the book was originally published in French as Tout bouge autour de moi (Éditions Grasset et Fasquelle, 2011). The English edition also includes a forward by Michaëlle Jean, former Governor General of Canada and Special Envoy for Haiti for the United Nations Educational,Scientific, and Cultural Organization, herself Haitian-born. As Laferrière writes near the end, “I agreed to open up a little about what happened so that other people wouldn’t feel alone with their emotions.” Laferrière gives life and breadth to the tragedy the way few others could, given his knowledge of his homeland, providing an account that should be required reading.

In the end, there never were those chaotic scenes that some journalists (but not all) no doubt wanted to see. I could just picture the front page of a major daily paper if looting really had broken out. And the televised commentaries from the instant experts about this barbarous country. Instead, people saw a dignified nation whose nerves were steady enough to resist the most terrible deprivations. When you understand that people were hungry long before the earthquake, you have to wonder how they managed to wait so calmly for help to show up. What did they live on during the month that preceded the distribution of food? And the sick who wandered the streets of the city without treatment? Despite all that, Port-au-Prince never lost its cool. We saw people standing in line, waiting for bottled water in the slums, the same districts that a few months earlier were considered danger zones where the government’s laws had no effect. So what happened? What can these changes be attributed to? Was this the shock the country was waiting for to wake up and halt its dizzying descent? We’ll have to wait a while longer to understand the true impact of such a tremendous event on the nation’s destiny. In the meantime, let’s enjoy the calm. Especially since we know that explosions of another kind (social, this time) are on the horizon.

Given the status of Douglas and McIntyre over the past few months, his usual English-language publisher in Canada, is Laferrière’s shift to Arsenal Pulp Press a temporary one, or something more permanent? Arsenal Pulp has produced a graceful paperback, and one only hopes that more books between the two might be in the works. Near the end of The World is Moving Around Me, Laferrière does talk about the book he was supposed to be finishing, composing this one instead of working final edits to the manuscript of a book on writing: “Notes to a Young Writer in Pajamas.” One only hopes the translation is already well underway, and publication is already in the works.
Posted by rob mclennan at 9:01 AM
Labels: Arsenal Pulp Press, Dany Laferriere, David Homel, Haiti

Is this already available? I'm really drawn to it, I've followed the news about the earthquake when it happened and it was really devastating. I really can't wait for this one.