The Weirds acquired their surname through a series of events that some would call coincidence and others would call fate.
Sterling D. Wyird, in the process of emigrating from England to Canada, worked his way across the Atlantic aboard the Icelandic fishing trawler Örlög. Inclement weather and empty nets made the six-week journey three months long. When Sterling finally stepped onto the freshly built planks of Pier 21 in Halifax he presented his papers to an immigration guard who, just that morning, had met the woman destined to be his wife. This guard, in a stroke of either inspiration or absent-mindedness, changed the y in Sterling’s last name to an e. Seventy-seven years later, as his great-grandchildren gathered for the final game of their high school football team’s season, the spelling mistake remained. They were still Weird. 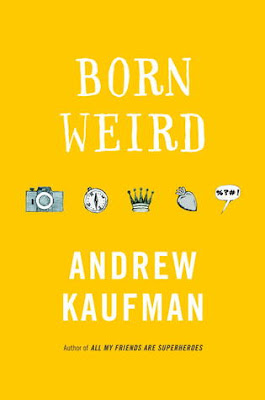 Whereas I hadn’t previously heard of his second novel, The Tiny Wife (Madras Press, 2010), I am an enormous fan of the fiction Toronto writer Andrew Kaufman has previously published, including his first novel, All My Friends Are Superheroes (Toronto ON: Coach House Books, 2003) and The Waterproof Bible (Toronto ON: Random House Canada, 2010) [see my review of such here]. There is just something in how Kaufman manages to write tender stories of family chaos and conflict merged with elements of fantasy that is entirely rare in fiction. No matter how outlandish and oddball his characters or plots might become, they all become a means to an end, focusing stories on what the heart wants. I’m constantly amazed at the ease in his writing, and how easily his stories begin; his humour, and incredible concepts. In Born Weird (Toronto ON: Random House Canada, 2013), we are introduced to the five Weird siblings: Richard, Abba, Lucy, Kent and Angie, as well as their grandmother, Annie Weird. As Annie lay in her hospital bed, she convinces her granddaughter, Angie, to visit and admits to bestowing each of the children a power at birth, each of which has become a curse. She gives Angie a quest: to reunite all five siblings in less than two weeks, the day Annie claims she is going to die. If all five children are in the room when she dies, the curse on each will be lifted.

What makes Kaufman’s stories so compelling, in part, is in the kind of physical and emotional detail he adds to give his characters breadth, and the ways in which we see the often very real results of such small decisions. Kaufman’s characters understand consequence, sometimes in such a real way that it becomes overwhelming. They understand consequence, and real loss. In such short spaces, he brings entirely to life the emotional turbulances, nuances and contradictions of family relations, and, despite sparing little detail, we aren’t overwhelmed by irrelevancies. The only information brought to the page are the essential ones.

In 1963 Angie’s grandfather Samuel D. Weird founded the Grace Taxi Service. He named the enterprise after his mother. When Besnard took over the business, in 1982, it had grown into the second largest fleet in the city of Toronto.
Over time Besnard developed many theories about taxis. For one, he believed that you should make a wish while hailing a cab. If the first taxi that passed by stopped and picked you up, your wish would come true. He also felt that every taxi ride was metaphorical—that it could be interpreted, like tea leaves or the lines in your palm. But his most firmly held theory was that your choice of taxi was a reflection of how you saw yourself. Of all his theories, this was the one that had been most firmly passed on to his children.
“No visible dents or scratches,” Angie said. She circled the cab slowly.
“You still do this?”
“I would have liked a newer model,” Angie said as she came back around to the back passenger door.
“Not in this town.”
“Really?”
“’Fraid so.”
“Okay, let’s take it,” Angie said. She slid into the back seat. “To the airport,” she told the driver.

From the three I’ve now read of his works, Kaufman seems quite attracted to the idea of the quest, of someone who is lost that needs to be found, and of transformative power of airplanes (specifically the non-stop Vancouver-Toronto flight, which, heading in the opposite direction, featured heavily in All My Friends Are Superheroes). The novel moves with an ease, an entirely natural flow, given the strange twists and turns through the plot of Angie Weird’s quest to reunite her four siblings together in their grandmother’s hospital room within two weeks. The only turn that felt odd was once their main quest had finished, near the end of the book, and the sub-quest began, being the quest to end the main quest. The transition between the end of their grandmother’s quest and the final passage through the plot felt strange, and nearly tacked-on. Otherwise, this was a magnificent novel, working through Kaufman’s fascination with family relationships and their long-standing conflicts, quests, redemptions and air travel. Where might he go next?
Posted by rob mclennan at 9:01 AM
Labels: Andrew Kaufman, Random House