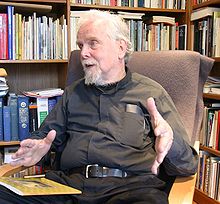 Some Canadian readers might recall that the much-published Hollo, who lived in the United States from 1967 onwards, also published a chapbook with Nelson Ball's infamous Weed/Flower.

Here is the notice posted yesterday on Harriet, the Poetry Foundation blog:


We are very sorry to hear the sad news today of Anselm Hollo’s passing. We reported recently that he was recovering from post-operative pneumonia and in the care of his family. Robert Archambeau offers a brief remembrance at his blog Samizdat:

I am very sad to have heard from Mark Johnson that Anselm Hollo died this morning.

give up your ampersands & lowercase ‘i’s
they still won’t like you
the bosses of official verse culture
(U.S. branch) but kidding aside
I motored off that map a long time ago

Those lines come from one of two poems from Anselm Hollo’s “Where if Not Here” we published in Samizdat back in the 1990s, and they capture some of my favorite things about Hollo’s viewpoint: his lack of pretense, and his complete disregard for the laurels, prizes, and jockeying-for-position that had already become endemic in the little demimonde of American poetry.

Hollo’s grasp of the gulf between the sublimity of which poetry is capable, and the absurdities into which poets fall in pursuit of that chimera, a “career in poetry,” made him the ideal person to hold the title of United States Anti-Laureate, to which he was elected by the Buffalo POETICS list back at the turn of the century.

The announcement from the POETICS listserv follows.

We’re sure many remembrances will be flowing in, which we’ll post on as they post. Until then, we’ll leave off with these poems from the April 1967 issue of Poetry, and these from the January 1969 issue. Hollo will certainly be missed by many.