Andrea Rexilius, Half of What They Carried Flew Away

What they wanted most was to see things they had never seen before. When they were people they felt relief. They were on a new sexual continent willing to proclaim anything. They couldn’t sleep. It was impossible for them to choose whether or not to be savage. They felt something.

It was already happening, like the sun in this place, their lungs helped them to arrive.

American poet Andrea Rexilius follows up her first trade poetry collection, To Be Human Is To Be A Conversation (Rescue Press, 2011) with a second, Half of What They Carried Flew Away (Tuscon AZ/Denver CO: Letter Machine Editions, 2012). Predominantly a text of perpetual lyric movement and continued arrival, Halfof What They Carried Flew Away explores a series of prose-poems that accumulate into a semi-narrative around echoes of immigration. What makes lyric prose so much more prevalent in American poetry than in Canadian writing? Somehow we still seem entirely too attached to metaphor-driven verse, yet this currently generation of American poets are apparently lining up to produce books of lyric prose-poetry, including Lily Brown, Joshua Marie Wilkinson, Eric Baus, Kate Schapira, Noah Eli Gordon, Paige Ackerson-Kiely, Richard Froude and so many, many more.

There are two worlds inside them: the world and the sky. One living organism, a marriage of space and inner catastrophe. They are referring to negation, to the deepest blue. But it’s hard to get the blue of this sky, they say. Is it the same blue as that blue over there? It is true, they think, to question the language the blue has given them. Their eyes can only reach so far, even hooked together. They cannot bring that blue next to this blue. What is this blue called, they wonder. What is that blue. 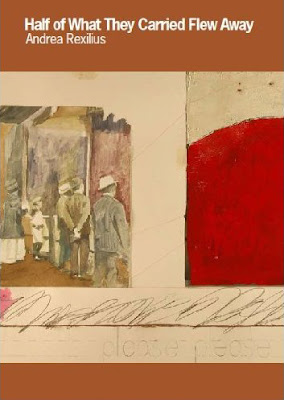 Broken down into five sections—“First Residence: Desire,” “Second Residence: Water,” “Third Residence: Emanation,” “Fourth Residence: Weather” and “Fifth Residence: Territory”—the collection also uses a thread of sub-titles, including “This is the interview of their first crossing,” “This is the answer of their first crossing,” “What is the emanation of the image?” and “This is the song of their second crossing.” The lyric collage of Rexilius’ Half of What They Carried Flew Away both creates and deflects a narrative, composing and sliding around speculation, describing a voyage that is often less described than entirely conceptual. “Human space is a cohabitation with fog.” she writes, somewhere in the second section. Further into the collection, she writes: “They are from the early 1870s. / They move from house to house like windows.” Even the ideas themselves remain slippery. This is a staggering collection, and one that requires deep, repeated readings. One must possibly drown within.

I do not know the limits of my own distinctions.
Transition is not easy to define.
We are teeming with bees, boll-weevils, locusts. Brimming
with maidservants and mistresses.
This is what we have learned from imagery.
A cruel second nature, but what happened to the first, what
will the next reveal?
Lower animals tell us more about ourselves.
Lost in a laboratory maze, the woodcock reasons, feels,
communicates across the centuries.
He lives in the cultural field. On the plains.
To what extent can he trust his eyes? Who is his animal double?
I am an amoeba by sympathy. We could answer to each other.
We could trade pictures we’ve drawn on stones.
We are plants and people. Our rituals dance.
We respect the sky with ease.