In life, the number of beginnings is exactly equal to the number of endings: no one has yet to begin a life who will not end it.

In poetry, the number of beginnings so far exceeds the number of endings that we cannot even conceive of it. Not every poem is finished—one poem is abandoned, another catches fire and is carried away by the wind, which may be an ending, but it is the ending of a poem without end.

Paul Valéry, the French poet and thinker, once said that no poem is ever ended, that every poem is merely abandoned. This saying is also attributed to Stéphane Mallarmé, for where quotations begin is in a cloud. (“On Beginnings”)

For the weeks preceding the arrival of American poet Mary Ruefle’s Madness, Rack, and Honey: Collected Lectures (Seattle/New York: Wave Books, 2012), I could see a flurry of excitement across the American writers I’ve friended on Facebook. Ruefle, winner of the 2011William Carlos Williams Award from the Poetry Society of America for her Selected Poems (Wave Books, 2010), is the author of ten trade collections of poetry, a book of prose, The Most of It (Wave Books, 2008), and a book of erasure, A Little White Shadow (Wave Books, 2006). Given that this new work is perhaps the first title I’ve seen from the Mary Ruefle, I come to the collection relatively free of bias, sweeping directly into the pieces themselves, a series of lectures delivered as part of her work teaching in the MFA program at Vermont College. As her introduction writes:

I never set out to write this book. In 1994 I began to be required to deliver standing lectures to graduate students, and the requirement terrified me. I was told the students preferred informal spontaneous talks, but I am a rotten and unsteady extemporizer. I preferred to write my lectures because I am a writer and writing is my natural act, more natural than speaking. 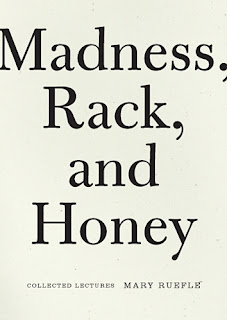 All of these essays are great, and some are quite spectacular, and come together as naturally as conversation, showing a rare ease through the form. Madness, Rack, and Honey: Collected Lectures is a collection of fourteen joyous, lively and inquisitive essays, and could perhaps be one of the finest promotions for Vermont College and Ruefle as a lecturer. Her first piece, “On Beginnings,” is fascinating in part because of the comparisons, writing from the opposite angle of, say, Robert Kroetsch’s tantric approach to the long poem—delay, delay, delay—pushing the ending as far from the beginning as possible. From his perspective, it was easy enough to begin, and he began so often that the ending eventually happened, whether he wanted it to arrive when it did, or not. She tells you not how to delay the ending, but explores, instead, how properly one might begin. She writes, “But there is no book I know of on the subject of how poems begin. How can the origin be traced when there is no form or shape that precedes it to trace?” In Ruefle’s essays, her arguments often cohere where and as one might least suspect. Her lecture, “My Emily Dickinson,” articulately weaves and wends unexpectedly through the intricately-connected works and lives of Emily Dickinson, Emily Brontë and Anne Frank, realizing and discovering connections between the three that might make all the difference in how they are seen. In the title essay of the collection, she discusses how important it is for a writer to waste time, writing:

Recently I found myself filling out a grant application by writing: “I seek an extended period of time, free from all distractions, so that I might be free to be distracted.” Distraction is distracting us from distraction. Perhaps we wish to be distracted by the slightest nuances of being, thinking, feeling, or seeing. (We are drifting into the madness of it now.)

I remember having a conversation a number of years ago with Toronto writer Margaret Christakos on exactly the same topic, except regarding our offspring, both of us fully aware how “wasting time” is essential for someone younger than twenty years old, in order for them to figure out what they might want or want to do. Ruefle extends this to the life of the working writer, and it’s something I agree with entirely, having spent years composing pieces on Greyhound buses, airplanes and other spaces where the time I spend is time I can’t do anything with at all. As she suggests, “wasting time” by removing all other distractions, and filling notebooks with aimless notes, most of which end up working into finished poems, stories or essays. Ruefle’s collection is a magnificent series of questions, articulations and explorations on writing, thinking, reading and how the world connections, and some of her connections are wonderfully unexpected, highlighting the most fantastic conclusions. Here is a brief passage from another stellar piece, her “Someone Reading a Book is a Sign of Order in the World”:

Once this thought crossed my mind: every time an author dies, out of respect a word should also pass out of being. A word the author loved and used repeatedly in writing—that would should be his and die with him. Nabokov: quiddity. But who should decide? The one who passes or the one who is left bereft? And who is the real widow? It is language herself, and her decision is clear: she does not want one of her children to throw herself into the grave pit of an old man. Quiddity: the essence of a thing; also, a trifling point, a trivial, inessential thing.

Another fragment of the same piece reads:

There was one book I read not only at the right age but also on the right afternoon, in the right place, at the right angle. I read The Waves on an island, on a plotless day, when I was twenty-two years old, sitting on a terrace from which I could see in the distance the ocean, and the horizon where it met the sky and the changing light that played there as the sun climbed to its zenith, and descended again while I thumbed the pages and my blood pressure washed up and down with the words. The Waves is not one of my favorite books. But my memory of reading it is. I was very silly when I was young. I have that to be thankful for.

As we do too, it would appear.