Another weekend in Sainte-Adele (with Lemonade 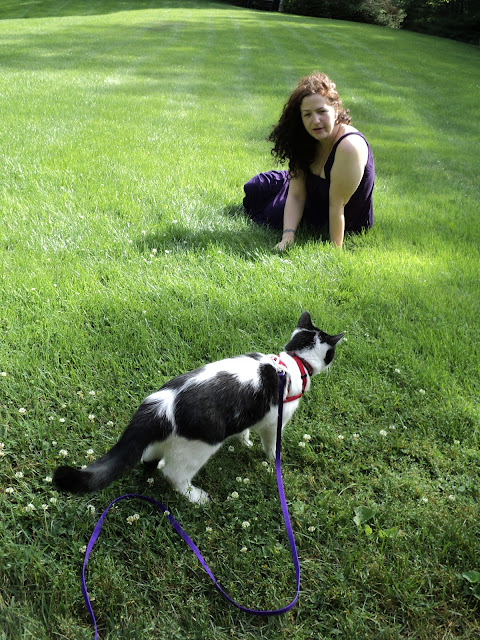 After the small press fair on Friday and Saturday, we left town on Canada Day for two nights in the Laurentian Hills, slipping out into Christine’s mother’s cottage in Sainte-Adele. Between the SOCIAL, various readings and small press book fair stuff, it feels as though we’ve had far too many events lately, escaping into the hills simply to breathe. Simply to breathe, except with cat in tow, a weekend Christine thought Lemonade should come along. Two and a half hours in the car, he was breathing shallow, uncertain if the heat or anxiety (probably both). We stopped for hamburgers at a chip truck (who, as we know, always have the best hamburgers) somewhere along highway 17, most likely Clarence-Rockland. Off the highway so the cat could breathe again, by a convenience store/gas station called Oops, and logo of a squirrel scrambling for nuts. Really? Their whole business model is one of poor planning?

Once at the cottage, Lemonade sniffed for hours, running running running to see what he could see, poking through all the corners. An indoor cat, we let him run outside on the harness; I know, how can a harness not be seen as offensive? But there you go. He didn’t care for the open space, kept running back to the house. The texture of the lawn confused him.

Christine worked on various things, but mostly breathing; I worked on a review or two, an article or two, a short story and even an interview, up soon at Canadian Poets Petting Cats. I wanted us to get some work done on our collaboration, since we’re reading from it soon at Dusty Owl (and producing a small chapbook of such), but there wasn’t enough time (we really need to come back, already).

All the while, listening to Warren Zevon and Momus. It was that kind of weekend.

Recently, those nice people at Grey Borders Books produced a chapbook of this poem, for the Niagara Literary Arts Festival, in an edition of fifty copies. They’re already long gone.

Lemonade, polydactyl (or,
the cat with twenty-two toes,)

Maps on the soles of their feet.
Michael Ondaatje, The Man with Seven Toes

is to pick out bone; inhumane,
they tell us,
, litter-box, his smile

round, rounded; sprouted,
only then, begin
white snowshoe, mitten-toed,

one hour out of twenty-four,

sleeps; tears through the house,