You are the key, the prize too
But your eyes are tired from staring away from the sea
You can’t see the trees for the desert
Think about it, death’s not a question
You’re so powerful, you do not want what is inside
That would be meaning
Turn down that road and don’t step on the grass
Too many letters for Scrabble
Trade Empire for another wing
And don’t fly away angry (Fred Wah)

Forty years is a long time to do anything, especially a literary enterprise, so it’s worth celebrating forty years of Vancouver’s The Capilano Review and their most recent issue for “four decades of experimentation.” As editor Brook Houglum writes to open her short “Preface”:

TCR’s 40th anniversary issue celebrates contemporary innovative writing and art—the playful, critical, thoughtful, irreverent—by showcasing a wide range of genres and practices. The issue features narrative, poems, epistolary poems, scripts for plays and for a sit-com, a chapter of a novella, an interview, photography, painting, graphic art, collage, and sculpture.
To celebrate our 40th year of publication, we invited contributions from ten writers and artists—Pierre Coupey, Christos Dikeakos, Maxine Gadd, Liz Magor, Daphne Marlatt, Steve McCaffery, Stan Persky, Sharon Thesen, Fred Wah and Jin-me Yoon—whose work appeared in early issues of The Capilano Review and was integral to the formations of the magazine. These writers and artists then suggested to us practitioners who are in the early stages of their careers—Soma Feldmar, Geoffrey Hlibchuk, Aisha Sasha John, Alex Morrison, Garry Thomas Morse, James Nizam, Lia Pas, Jasmine Reimer, Jennifer Still, and Charlene Vickers. As such, the issue exemplifies our long-running mandate of featuring the established alongside the new. In the visual art section, each invited artist is positioned adjacent to the artist they recommended. 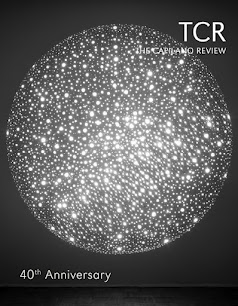 A lot has changed over the past four decades, which make it even more impressive that so many of the early contributors are still producing and involved, including founding editor Coupey, who not only has “a three decade survey” of his work in spring 2013, jointly curated by the West Vancouver Museum and the Art Gallery at the Evergreen Cultural Centre, but is a member still of the journal’s board. A lot has happened, and many of the journal’s back issues are worth rereading (something that can’t necessarily be said for as many literary journals as you might hope), something I was able to explore in short pieces composed a few months back for The Capilano Review blog (on Sylvia Legris, Lea Graham, Robert Hogg and Roy K. Kiyooka). Some highlights to the anniversary issue include a selection of Soma Feldmar’s epistolary tribute, “Origami: An Imaginary Correspondence with Robin Blaser,” new poems by Daphne Marlatt (who is apparently working up to a new edition of her Vancouver Poems, forthcoming from Talon), Sharon Thesen, Fred Wah, Stan Persky and Aisha Sasha John (furthering on her work-in-progress, “The Book of You”). This is an issue that gives tribute, it seems, to its history, and the histories that have rippled around and through them. For Feldmar’s work on and about Blaser, how is it the epistolary form seems somehow the most appropriate form of tribute and exploration of his writing, composing out her questions?

Do you not write on love? that imagination is
the crown of your glory, love must follow in some
suit. yes. for imagination is at the core of desire.
perhaps ‘love’ is not quite the right word.

the difficulty in making a home. my resistance
to being cosmic, to being a maker; master or no.
the end of the line, here, beside me. to embody
reluctant presence forget the birth of language.

I often oscillate between things. am hunted,
haunted, by the ghosts of persecuted poets. this
is eros, I am told. though I fear the onslaught of
hunger.

To be an architect of white washed words.
is this my fate? to blindly construct houses of
infirmary from which I step into the common
darkness.

No, I know. I must follow the print press.
follow the way of ink and forge my passage to the
rare shadow land.

It’s heartening, also, to see a lengthy interview with Vancouver poet Maxine Gadd in this issue, conducted by Kim Minkus. Despite Gadd’s return to publishing trade books a few of years ago after such a lengthy gap, there really doesn’t seem to have been much critical attention paid to her work, from her poetry to her activism, and her early work in Vancouver with presses such as bill bissett’s blewointment. Beginning in the early 1960s, she was active in and around Vancouver for more than two decades, yet after the publication of her selected poems, Lost Language (Toronto ON: Coach House Press, 1982) she didn’t publish another trade collection until Backup to Babylon (Vancouver BC: New Star Books, 2006).

KM: As poets and as feminists. I wanted to ask you about one of the poems in Backup to Babylon, “My 135th Feminist Nightmare”—I love the title of that. You’ve talked about being a feminist. I went to a wonderful conference a couple of years ago, and at the end of the conference we were to talk about what we had accomplished, and it was such a waste, three hours spent trying to define feminism. That horrible academic tendency of having to define everything. I want to think of things as more relational. What is your relationship to the word “feminism”? I sometimes say to friends, “We’re women and we’re poets. How can we be geniuses?”

MG: Everything works against it. Even people that love you and that you love, or whatever, they’re always, if they’re men, they’re always invading. Of course, women do the same thing to women, too. But as a woman I suppose you feel you have to be open and accessible and meditative and mediate things. It’s very hard to have that wonderful selfishness that the male genius has. I hate to feel like I’m undermining men, but it seems sometimes that we all give up, that’s what happens. We all give up, I think.

KM: Do you think there’s a way of not giving up?

MG: Well, just to have a voice and then the ego, I guess. That’s one of the big things. You see, spiritually you’re supposed to—this was really big in the ‘60s—you’re supposed to become more Buddhistic, and surrender your ego and that was being preached. And then with feminism you realize, “Where is my ego? Where is the ego of other women? Where are all the other women? Where are their egos and their genius?”