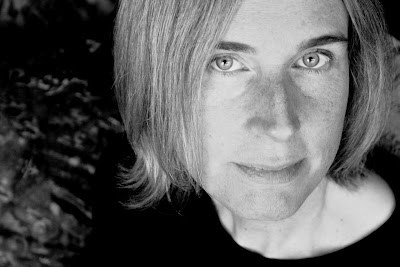 Susan Steudel is a Vancouver poet. She is the recipient of several awards for her poetry including the Ralph Gustafson Prize, a Bliss Carman Poetry Award and a Mayor’s Arts Award for emerging artist. New Theatre (Coach House Books, 2012) is her first book.

1 - How did your first book change your life? How does your most recent work compare to your previous? How does it feel different?
New Theatre is so recent that I’m only just getting used to the idea of having a book out in the world. First thoughts are that it’s not so much the book as the relationships formed during the writing and editing process that feel important, the book being a result of those relationships. New work picks up on earlier themes, although right now I’m less assertive along those lines of questioning and less particular about the language.

2 - How did you come to poetry first, as opposed to, say, fiction or non-fiction?
I’ve written fiction and my stories either benefit or suffer from open-endedness. I like fitting energy into a poem and making out a narrative that way. The poem is a place where I can ask a question and engage with the world in a way that feels concrete.

3 - How long does it take to start any particular writing project? Does your writing initially come quickly, or is it a slow process? Do first drafts appear looking close to their final shape, or does your work come out of copious notes?
A project accumulates at its own pace. A piece will happen, then another piece. I’ll see a connection between the first and the next and a shape might begin to grow. Eventually a discovery will happen in the form of experiment—a language poem or a visual poem. I’ll bring that poem to the front and watch to see what happens. Much of the lyric work will fall away and I’m left with the vital structures.

4 - Where does poetry usually begin for you? Are you an author of short pieces that end up combining into a larger project, or are you working on a "book" from the very beginning?
I’m always looking for ways to expand, to write a project out to its best size. About book-length projects, I have ideas that I’d like to let develop in the future.

5 - Are public readings part of or counter to your creative process? Are you the sort of writer who enjoys doing readings?
Readings. Well, I think performance is part of the poem. There is an action in a poem. I also very much like hearing poems read in public.

6 - Do you have any theoretical concerns behind your writing? What kinds of questions are you trying to answer with your work? What do you even think the current questions are?
I write a lot about family, and questions around language, materiality and power often stem from there. Current questions have to do with what is spirit/what is material.

8 - Do you find the process of working with an outside editor difficult or essential (or both)?
I don’t want to write in a vacuum. I’ve been fortunate to work with wise editors.

9 - What is the best piece of advice you've heard (not necessarily given to you directly)?
Laugh.

10 - What kind of writing routine do you tend to keep, or do you even have one? How does a typical day (for you) begin?
During the school year I try to get up at 5:00 and write until about 7:30. Then it’s time to wake the kids and help them get out the door.  Then most days I race to work.

11 - When your writing gets stalled, where do you turn or return for (for lack of a better word) inspiration?
Visual art. Conversation. Essays.

12 - What fragrance reminds you of home?
This is an excellent question. Maybe soil?

13 - David W. McFadden once said that books come from books, but are there any other forms that influence your work, whether nature, music, science or visual art?
Strongly influenced by non-representational artwork. Especially works by Wassily Kandinsky. Agnes Martin. Karen Schiff. Paul-Émile Borduas, and others. Works that generate a quality, a grid, a shape, a feeling.

14 - What other writers or writings are important for your work, or simply your life outside of your work?
Writers like Juliana Spahr and Claudia Rankine who are making anthologies of women’s writing and whose concerns include gender and innovation. Collagists, feminists, translators. Phyllis Webb. Jen Currin. Lisa Robertson. Robert Creeley. Brenda Hillman. Erín Moure. C.D. Wright, and others. Essays, fiction and poetry by Nicole Brossard. Eduardo Galeano’s The Book of Embraces. And, going back, Gabriel García Márquez. Pablo Neruda. Doris Lessing.

15 - What would you like to do that you haven't yet done?
Live for a year in Paris.

16 - If you could pick any other occupation to attempt, what would it be? Or, alternately, what do you think you would have ended up doing had you not been a writer?
I don’t want to do anything else.

17 - What made you write, as opposed to doing something else?
I found myself with a desk and a window. And my work tools, a computer and reference materials.

19 - What are you currently working on?
A small intuitive project, still untitled.