Dear Jenny, We Are All Find, Jenny Zhang

I am also Frank and also so frank with you
on all subjects: the war of peacetime
what your sister ate on the rooftop
the Moroccan sisters who called me in
the prayer of witches in a chadri I sewed
myself in boiling vats like a stomach wanting to be
pierced or thrown like driftwood, your friend Randy
pulled down my pants, first as a joke, and later
you wonder: why’s she crying? I am randiest
when you first step into the hallway
I am quiet first and then the rapping is mispelle
French is boring, I revolted only a little
The Catholic church wanted me to be supplicant
and I supplied them with sincere inquiry
Can’t I be my own dream? No
you can’t and yr tiger laziness is the lioness bounding
well, you have shown de rigeur and the fanfaronade
is yr lowlife for a day, you were born a queen
I eat the squeamish crumby leftovers from your ten greatest feasts
and I feel nothing but lucky, lucky to sleep by your feet. 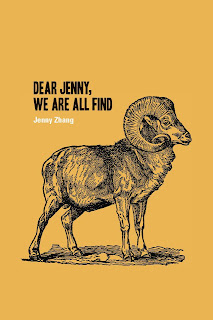 It’s remarkably easy to be able to claim that Jenny Zhang’s first trade poetry collection, Dear Jenny, We Are All Find (Portland OR: Octopus Books, 2012), is one of the most startling and lively poetry debuts I’ve read in some time. Crass and shocking and smart as hell, it is also the poetry collection with the most references to getting one’s pants pulled down I’ve seen in a poetry collection. But does one have anything to do with the other? What appeals about these poems is her use of the accidents between languages (New York-raised Zhang was born in Shanghai), from the implication of the book’s title, to the title of the final poem in the collection, “My mother leaves me a message where she pronounces all Romance languages in a deep voice.” A poet such as Tibetan-American Tsering Wangmo Dhompa might explore the cultural collisions between two such different perspectives, but Zhang plays with the words themselves, each mispronunciation and accident providing the fodder for yet another twist and purpose. There is an enormous amount of play in these poems, and Zhang’s sentences delight with lines often disguised as straightforward statements.

Seriously, Unless You’re Chinese,
I Want You To Fuck

I thought of a great mansion
the fissuring streets were pressure
I had the insurance of five candied women
they were Chinese and like me told to bark
so behind the tree was carved some
They don’t understand irregularities in strokes
I noticed something about being
free and young and supposedly imitable
all your friends are stark white
I ask that some of them at least learn tones
tasking a sad thing to shiver like scintillating lakes
the shivaree of my current union—
we trumpted horns and ate every part of an animal
you cannot possibly understand—
there are no Christ references
this person has never heard of apostles
The Psalms I spelled The Palms, Last Vegas
Posted by rob mclennan at 9:01 AM
Labels: Jenny Zhang, Octopus Books, Tsering Wangmo Dhompa