There are no mermaids in Lake Ontario,
but I’ve heard you singing. The girls

leaned in, legs wobbling onboard,
their footing unsure. Before the ferry

crossed our path we tacked, taking our time
with the racing done and the jib sheets slack.

The wind flirted with their feathery hair,
and they shivered as if feeling your eyes

comparing their bare arms, tempting
and harmless. One among us will be your

true wife. Across the inner harbour, hotels
lure and wink, waiting for your gamble.

Prince of this pleasure craft, you sighed
and looked away from the western gap

and the squalls beyond these sheltered waters.
Soon we’d be motoring back for supper.

Flaking the main, I hugged the mast.
I never stopped my ears against your suit

nor strained against what bound me. Our
greatest hardships are those closest to home. (Phoebe Wang, 2ND PRIZE POETRY)

Arrived in my mailbox recently was Saskatoon’s grain: the journal of eclectic writing, Vol. 39.2 (winter 2012), their “short grain contest issue,” as poetry judge Jeramy Dodds awarded three prizes (in order) to Tim Bowling, Phoebe Wang and Vincent Colistro, and fiction judge Zsuzsi Gartner awarded three to (in order) Pete Duval, Zack Haslam and Zoey Peterson. It’s interesting to see, especially given that the issue that appears a year from now will be holding my own choices in the poetry category (apparently a mound of poems appear for me to judge in May), thanks to previous editor Sylvia Legris. As Dodds writes about the winning poem, Bowling’s “Gedding Wilder”:

What catches the eye, in this poem, soothes the ear, tweaks the mind. The movement and disposition of this piece shows a cool hand at imagery and complete control of tone. We are treated to language that both jokes and loosens our grip on narrative, while the leaping cinematics sequester any hopes we may have of coming out the same. We are stared at by “every crow / in a photographer’s cloak,” “and all the dark drops of rain / left fingerprints at the scene / of the crime” while there are “totemic salmon / swimming jerkily by.” But if we think this is just a list of acute imagery we are mistaken, for the entirety of the poem’s structure feeds its lyricism, “this cut jumps like that, like life, / life jumps like life.” 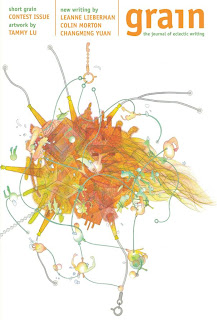 To judge, and then to judge. During a comedy awards show last year, Tina Fey said something along the lines that all award shows “are bullshit,” and I mostly agree, but understand also the benefits of highlighting certain works and artists, or even the simple matter of getting money into the hands of poets who are doing interesting works.

The Bowling poem doesn’t do it for me, but then again, I wasn’t the judge for last year’s competition (I much preferred the second place piece).

But there are other pieces in the issue as well. Partly because the story is set in Ottawa, I’m intrigued by Robert Lake’s short story, “The Delphic Embroiderer,” an odd tale that can’t quickly be described, but can easily be the exception to the rule that all fiction set on Parliament Hill has to be political.

Perhaps it might be best to simply give you the opening paragraph, and let you be your own judge:

The shooting of a bewildered moose on Parliament Hill provoked considerable media coverage and, of course, forced me to correlate this unexpected event with chaos theory, which asserts that nature is neither mindlessly orderly nor chaotic. Nature fluctuates predictably, yes predictably, between pattern and random movement. Is moose murder random or a human pattern? If both, in what proportions has Nature blended order and chaos, a statistical challenge worthy of John Nash, perhaps even of Euclid, the triangle guy? Why had the moose strayed from the herd? Most important: what does blood gushing from the moose’s jugular fifty metres from the Prime Minister’s Office portend, if anything?