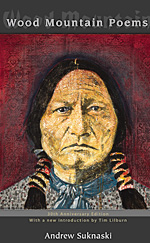 Prairie poet Andrew Suknaski, known as “the poet of Wood Mountain, Saskatchewan,” died of natural causes in Moose Jaw, Saskatchewan, on Wednesday, May 3, 2012. Of Ukrainian and Polish decent, he was born on his parent’s homestead near Wood Mountain, Saskatchewan in 1942, left home at sixteen, returned, left home again, and repeated over the next twenty years before making it to Regina, and finally to a group home in Moose Jaw in the 1980s. In the years that followed his first departure, he worked as a migrant worker, travelled through Europe and Australia, and attended Simon Fraser University and the University of British Columbia in Vancouver, eventually falling under the wing of Vancouver poet Earle Birney. He also studied at the Kootenay School of Art in the British Columbia interior, as well as the Montreal Museum of Fine Arts School of Art and Design. Through heavy amounts of publishing in small press publications and elsewhere starting in the late 1960s, as well as his own Elfin Plot Press, he caught the eye of Ontario poet and editor Al Purdy, who included Suknaski's poems in his first Storm Warning Anthology (1970), before editing what would become Suknaski's first trade and most famous poetry collection, Wood Mountain Poems (1976). He was the subject of a documentary film by Harvey Spak for the National Film Board, and was writer-in-residence at the University of Manitoba in Winnipeg in 1978. Anyone in the prairies older than their mid-40s not only knows of the work of Andrew Suknaski, but might even consider him an influence, through years of his work being taught from out-of-date anthologies. Until his first trade collection Wood Mountain Poems, edited by Al Purdy for MacMillan, was reissued by Regina's Hagios Press as a thirtieth anniversary edition in 2006, almost everything of Suknaski's had long been out of print. Working through Andrew Suknaski's poems, the collection Wood Mountain Poems wasn’t a beginning, as many readers have come to see it, but almost a mid-point in his writing career, moving into text and away from the visual poems that made up a large part of his first decade. Still, despite his years of producing visuals and chapbooks and publishing and distributing across the country, the first few lines of his long poem "Homestead, 1914 (Sec. 32, TP4, RG2, W3RD, Sask.)," the first poem in Wood Mountain Poems, and reprinted innumerable times in anthologies (much the way George Bowering's poem "grandfather" had been, from a decade earlier), was the first, and sometimes only reflection that any reader saw of the work of Andrew Suknaski.

for the third spring in   a  row now
i return to visit father in his yorkton shack
the first time i returned to see him
he was a bit spooked
seeing me after eleven years –
a bindertwine held up his pants then
that year he was still a fairly tough little beggar
and we shouted to the storm fighting
to see who would carry my flightbag across the cn tracks
me crying: for chrissake father
lemme carry the damn thing the
train’s already too close!

For years starting in the late 1960s and further into the 1980s, Andrew Suknaski was one of the most prolific, energetic and influential poets in the prairies, travelling and writing, making poems out of drawings and words and cigar tubes and kites, and producing chapbooks and magazines as he went. Suknaski, more than anyone else, became the face of prairie poetry to a multitude of writers, readers and other admirers. What happened, you might ask? He was a combination of friend and contemporary, student and mentor to more than one generation of writer across the country, including Eli Mandel, Barry McKinnon, Gary Hyland, John Newlove, Patrick Lane, Al Purdy, Kristjana Gunnars, Dennis Cooley, Robert Kroetsch, Mick Burrs, Dennis Lee, Tim Lander, Mike Olito, Robert Currie, Catherine Hunter, Jars Balan, bill bissett, bpNichol, George Morrissette, Stephen Scobie, Smaro Kamboureli, Linda Rogers and so many others. As an author, he produced eight trade poetry collections and dozens of chapbooks; as a publisher, dozens more. Suknaski's poems were written as stories about the land and the people that lived there, working their way toward myth, and the myth of the place, even as he told the "real story" of various residents of the village of Wood Mountain. Like his friend John Newlove, Suknaski was one of the first too write any stories about the Native peoples in that part of the country, well before it would have been considered "voice appropriation," and helped more than a few other writers open up to tell their own stories down the road. There is a particular kind of deceptively simple prairie plainspeak that Suknaski seemed to perfect in his poems, and one that is repeated by many of the writers that came after him, but often without the kind of nuance that Suknaski was known for, through his series of seemingly endless departures and returns. As Scobie wrote in the introduction to Suknaski's previous selected poems, The Land They Gave Away (1982):

Suknaski has had an immense influence upon the development of Prairie poetry over the last ten years. This "anecdotal" style has become an orthodoxy, and, in the hands of less skillful writers, a cliché. Suknaski's best work retains the energy and vitality of the speech he is quoting ― but the danger of the style is that the poetic rhythms will go flat and dull, producing only some mildly interesting short stories which might just as well be told in prose.

Suknaski's poems continually return to that edge to acknowledge the stories around him that might otherwise have been lost, writing of his own family histories and those of friends and neighbours, to various of the other nations and nationalities around him, including the immediate Sioux (ever aware of his immigrant guilt), the Chinese, Polish and Ukrainian immigrants, and various others of the native peoples. It is important to note that the word "honour" is repeated throughout his poems, as is the word "remember." Suknaski does remember, including stories of Big Bear, Sitting Bull and Crowfoot, Gabriel Dumont and the Teton Sioux, much in the way other writers, such as his friend, the poet John Newlove also did, another Saskatchewan poet who left the land, but, unfortunately, was unable to return (he considered himself a Saskatchewan poet for the rest of his life). For Suknaski, perpetually leaving and returning, the land itself is important to him, from his father and mother as well as the physicality of his home base of Wood Mountain, Saskatchewan (elevation 1,013 metres), close to the Cypress Hills (the highest point between Labrador and the Rocky Mountains), site of the infamous Cypress Hills massacre.

There is a line by Eurpides that the late poet Irving Layton referenced when he wrote his "Birthday Poem for John Newlove" that could also apply to Andrew Suknaski, writing "Whom the gods do not intend to destroy / they first make mad with poetry." In her piece "Essay Parcels from Andrew Suknaski" from the anthology Trace: Prairie Writers on Writing (1986), prairie writer Kristjana Gunnars wrote of receiving dozens of packages of poems and bread (made from the ash of Suknaski burning his papers) from Suknaski, the bulk of which she couldn’t even bring herself to open, writing "The artist is a poet. It was as I had feared. The artist was mad." In a piece that doesn’t really show the best side of either, she starts the short piece with:

It was April when the parcels started arriving. The snow was melting. Yellow grass could be seen by the fence. I went home after work one evening. Opened the screen door. Two large thin parcels fell to my feet. The postman hid them between doors.

I did not open the parcels. They went into the basement. Next day four cards in the mailbox. Four more parcels at the St. Norbert post office. I picked them up. Not because I wanted them, but because of the Francophone clerk. He was so excited.

Those parcels went into the car trunk. There they stayed, unopened. When the warm weather came a great perfumed smell arose from one of the packages. When I got into the car it made me think of a field of tulips in Amsterdam.

Andrew Suknaski once said that he got the same amount for his papers that his father got for the homestead (where Suknaski's sister is still buried), a total of five thousand dollars for each. according to the University of Manitoba website, “in 1987, having wearied of transporting his personal papers during his frequent moves, Suknaski burned twenty years of records in a bonfire in his backyard. What remains of his papers encompasses the years 1977-1972. The collection comprises 15 linear feet. There are drafts of many of his published works as well as correspondence with literary fugures like Eli Mandel, John Newlove, Robert Kroetsch and Kristjana Gunnars.[…] Perhaps the most valuable portion of the collection are the unpublished manuscripts that Suknaski worked on during the 1980s, including “Divining the West,” “Ussuri Line” and “In Search of Parinti/History of the Roumanians in Western Canada.” When he began having difficulties in the 1980s, he joined a select group of Canadian writers, poets considered the best at their craft, who, for whatever reason, had stopped writing (or at least, stopped publishing), including Montreal poets Peter van Toorn and the late Artie Gold, the late Toronto poet Ed Lacey, British Columbia poet David Phillips, and Ottawa poet William Hawkins. Over the last twenty-five years of his life, Suknaski lived in Moose Jaw, Saskatchewan, not far from his original home of Wood Mountain, and not far from his close friend Gary Hyland, who long looked after his affairs until he died a few short years ago.

My biggest regret is that the book I’ve spent twelve years working on, There Is No Mountain: Selected Poems of Andrew Suknaski, hadn’t yet appeared in time for him to see it. After many complications and hurdles, an individual came forward yesterday to help fund the production, but now waits for the appointment of a literary excecuter before proceeding.

An Ottawa memorial is currently being organized for Friday, June 1 at The Carleton Tavern, as is a Montreal memorial, hosted by Brian Sentes.

I would love to see his unpublished works see the light of day! The canadian prairies needs more culture of its own.