I’ve decided to take E.M. for my experimental subject. She’s here and she’s a pest; she might as well serve some useful purpose. And she has an inner forum, and recalls an infancy, an infans before speaking.

As for me, I am better off without either.

Montreal poet and translator Erín Moure’s new poetry collection, The Unmemntioable (Toronto ON: Anansi, 2012) continues a number of threads in her work over the past few years, from translation, border-crossings and her increasingly-constant companion, collaborator, foil and hetronym (in the Pessoa sense) Elisa Sampedrín. In The Unmemntioable, Moure includes a study of Sampedrín alongside her own grief, taking her mother’s ashes to (as the back cover writes) “the village where her maternal family was erased by war and time. There, watching E.M. through the trees in a downpour, an idea came to her: she would use E.M. to research the nature of Experience.” The nature of experience, as the book explores it, is multi-faceted, and somehow complex enough that it actually becomes more readable. How does that happen?

My intention was just to write at the desk in Bucureşti, but this notebook paper turns into a plant again damp with sap and fibre and breaks the nib. Perfumes anarchic tendency and a way with words, fallen down on crested birds.

“The smell of hay at the look of god”
the pen writes.

“We wept our gifts for you, dear mother, our treasures. Waking up in the night and wringing out the shirt. Even then, the tumor was growing in the blood.”

(Tomasz’s shadow bent long from the doorway to the forest, but it’s just the noise of darkness and the gate banging shut in wind)

This notebook is arresting sleep (lying face-down in a pool of snow). When I look up, a siren, and the light of the ambulance flashes off the walls at it streaks down Matei Voievod in the dark…. but who does it carry? And repeatedly? E.M.? Has she eaten a peanut again? 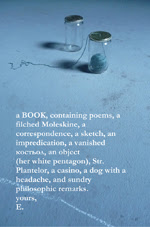 Over the course of Moure’s trilogy of poetry books O Cidadán (Anansi, 2002), O Cadoiro, poems (Anansi, 2007) and O Resplendor (Toronto ON: Anansi, 2010), as well as her Little Theatres (Anansi, 2005), where we first met the writer and translator Sampedrín, Moure has worked increasingly complex book-length collages of essay-poems, lyrics, arguments, questions and prose-lines, all while adding layers and nuance to Elisa Sampedrín. It is as though Moure works hard to diminish or even erase the narrator/author, even while building up the hetronym of Sampedrín. And why is Sampedrín so argumentative in this collection? We’ve seen Sampedrín be argumentative before, certainly, challenging the narrator in all sorts of ways, but this collection almost sees Moure’s hetronym downright hostile in places. Exactly what is happening between the narrator and hetronym, two elements of the author herself? It would seem that, although the questioning is sometimes harsh, the collaborations remain.

Where Moure’s previous trilogy focused on “the citizen,” her new collection, The Unmemntioable, turns the same gaze sideways, writing out her mother’s Ukrainian background quite specifically, and exploring how the experience of this particular citizen and her forebears produced the woman that Moure knew as her own mother.

If anything, it’s the fault of reading. When Chus Pato’s poetry appeared on my desk, I decided to give up writing poems. I moved to Bucureşti to see if I could free myself from this crisis of experience, this excision of language. Then I saw Erín Moure in the park at a café table, looking at me. Why did she come here?

What does she know about experience? Her mother tongues resist all attempts at a technical language.

Is it that she has no mother tongue?

Today, I refuse to be pinned down to an identity. Right away, I want to betray it.

Through her mother’s death and the exploration of her and her family’s history, the blend of narrative, fragment, language and translation weave throughout in a remarkably natural and fluid way, all of which could be boiled down to Moure’s interior monologue. Scribbled down in moleskins while travelling, the book concludes with what, on the surface, reads like a prose memoir of travel. These are sketches possibly even composed in that café in Bucureşti, perhaps, writing out and through the geography of her mother’s family that read as deep, meditative and as personal as, say, Brian Fawcett’s Human happiness (2012) or Susan Howe’s That this (2011):

Dear Chus: everything I had dreamed turned out to be made of paper. The skin was an organ that suffered in silence the rays, the scourges, the cuts of trees and medicine. In Hlibovychi in 1922, the war was over but the repressions escalated. Predeceased by her father Oleks, now with more children, my grandmother Anastasia emigrated with Tomasz in 1929, to NW14.72.9.W6. Riding down the south side of the mountain, the side with a road, the smallest daughter, my mother, went to school.

Forderung. “We must press forward to the schools.”

In the innermost core of blinded love, with is and must never be realized, a woman is trying to open her eyes to see.

Though my mother is gone, her face still claims me. In the morning I write wearing her cancer hat. I wear her Western belt to Whitehorse. In my pocket, she stands at the summit cairn in Wonder Pass with her friends the nurses. They wear anoraks and sunhats. Maybe one day, as she did, I will wear her blue ribbed hat, the knitted one, as hair.

Moure has composed a book that furthers her ongoing explorations in language, translation and identity as well as writing out a tribute to her mother and her mother’s history. “A mother is the unmemntioable boundary / that can never come fully clear.”

From Barthes' The Pleasure of the Text: "The dismantling of language is intersected by political assertion, is edged by the age-old culture of the signifier."

And a random(?) line of Moure's from this book: "In the passport the child defiant in the father's arms stares ."

And again Barthes: "...narrativity is dismantled yet the story is still readable" this time reinforcing your observation about experience as explored by Moure being "complex enough that it actually becomes more readable".

"At first, language was cut off; closer it pulled out eyes.

There, hope could not know we."

We, readers, fortunately might get to know hope, if we can read the complexity. I am looking forward to reading The Unmemntioable often and closely so that it opens my eyes.