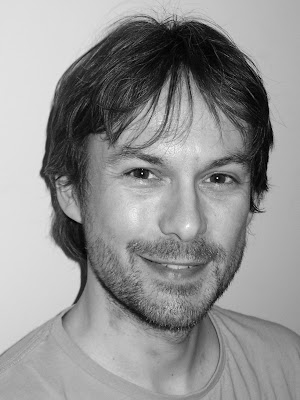 Peter Hobbs grew up in Cornwall and Yorkshire. His debut novel, The Short Day Dying, was published by Faber in 2005. It was shortlisted for the Whitbread First Novel Award and the John Llewellyn Rhys Prize and won a Betty Trask Prize. It was also shortlisted for the 2007 International IMPAC Dublin Literary Award. A collection of stories, I Could Ride All Day In My Cool Blue Train, was published in 2006. His new novel, In The Orchard, The Swallows, was just released in Canada by House of Anansi.

1 - How did you come to fiction first, as opposed to, say, poetry or non-fiction?
I've always read a lot of all three, but I guess when I started writing it came out as fiction. I just enjoyed playing around with voice and sentence and story. I wrote some poetry, too, but I knew I wasn't good enough to be serious about it. With the fiction, I had a sense it was working, that it was something I could do. I think too that it becomes a discipline, that as soon as you begin to look at the world through the prism of one particular form, that's how your thoughts tend to shape. When I started taking the writing seriously, and working on novels, my ability to write poems dried up pretty quickly.

2 - How long does it take to start any particular writing project? Does your writing initially come quickly, or is it a slow process? Do first drafts appear looking close to their final shape, or does your work come out of copious notes?
I work a lot at an idea before I really start writing. I work on a book internally – thinking about it, and letting it boil over in my subconscious – for maybe about 18 months. That's just part of the process. And usually through that time ideas are arriving, and maybe even sentences, and I'm making notes. It's probably the most pleasurable bit, when you're just engaging with the idea of the book, and you're not messing it up with words. Then at a certain point I get enough to sit down at the computer and begin writing – it's a slow, painful process. I work at small bits all across the book, rather than starting at the beginning, and I edit as I go, constantly reworking sentences and paragraphs. Consequently, when I do eventually get a draft, it's usually pretty close to the final shape (unless I've got hopelessly lost along the way). The Short Day Dying needed one thorough re-write to get the narrative flow right (which was tricky, in any case, as not much happens in that book). In The Orchard, The Swallows just needed some minor line editing. Which isn't to say that it came easily, of course.

3 - Where does a story usually begin for you? Are you an author of short pieces that end up combining into a larger project, or are you working on a "book" from the very beginning?
I pretty much always know, when I get an idea, what it's an idea for. I get a sense of voice and feel and shape (in my head, this is somehow both a very vague and highly precise sense) and the shape is usually novel-shaped, or short-story shaped. I know some writers start somewhere and see where it takes them, but I just can't work that way. I need an idea of the whole thing.

4 - Are public readings part of or counter to your creative process? Are you the sort of writer who enjoys doing readings?
It's changed, over time. For the first book, I was mostly nervous, and then after a while I came to see it as a distraction. It's a strange experience – you start being treated, publicly, as a writer, right at the moment you stop writing. I think for many young writers it's problematic. I'd written the first two books pretty much for myself, and was in a good creative space. For a long while the whole publicity thing changed the way I thought about my writing, and it took me a while to get back to a place where I was happy again. And having got over all that, I'm starting to see it as part of the process – engaging with readers gets you talking about what it was you were trying to do with the book, and helps me work through my thoughts about writing. (It's also more sociable than writing, and usually more fun, too.)

5 - Do you find the process of working with an outside editor difficult or essential (or both)?
I've been lucky – I've got a great editor, Lee Brackstone, at Faber and Faber. That kind of literary editing is getting increasingly scarce as publishing changes – editors seem to be having to become kind of multi-purpose salespeople, and they have less time to properly engage with every book they're working on. Having someone who sees what you're trying to do, gets it completely, and then finds a way of talking about it that helps you see where you are – it's how things should be, but it's pretty rare.

6 - What is the best piece of advice you've heard (not necessarily given to you directly)?
Not necessarily the best, but one that sticks in my mind from my agent. I was struggling with figuring out how to rewrite a novel at the time, which hadn't worked first time round (in the end I put it aside, and am going back to it now). As she has an occasional tendency to do, she launched into a long, meandering (and highly entertaining) story about how she was having her kitchen redone, and how the builders, when they finally shifted the ancient kitchen island, found a perfectly flat mouse underneath it. “I'm not at all sure what I was trying to say,” she said when she'd finished, “but tell me when you've found the mouse.” Needless to say, I love my agent.

7 - How easy has it been for you to move between genres (short stories to novel)? What do you see as the appeal?
The appeal of short stories is obvious – the form is challenging, and unforgiving to bad writing, but you can in theory get one finished and polished in a fairly short space of time (though they often take much longer). If it goes wrong, then no problem, you just move onto the next one. You can experiment a lot, and finishing a good short story is probably just as rewarding as finishing something longer. On the other hand it takes me about three years to write a novel, and if it isn't working, then it's a real problem. But I feel pretty much that I'm a novelist these days, as it's mostly what I'm working on. It's partly that prism thing I mentioned earlier – when your brain is working on tackling the problems of novel-writing, it shapes itself a bit to that form. After publishing a collection of stories, I went a long while without writing any more. I've got a few on the go again now, but they don't come as easily as they used to. I suppose I'm also aware that very, very few writers are really good at both, and I should probably play to my strengths.

8 - What kind of writing routine do you tend to keep, or do you even have one? How does a typical day (for you) begin?
Writing's hard. You constantly have to look at what you're not getting right, and make it better: it's a fairly masochistic mentality. It always feels like one long, extended act of failure. So on any given day I'll do absolutely anything I can to avoid writing. The only thing I've found that helps with this is to have two things on the go at once, so that to avoid working on one I end up doing some work on the other.

9 - What fragrance reminds you of home?
I grew up on the edge North Yorkshire Moors, in the North of England. In August the heather blooms purple, and the moorland is lit up for miles. The smell of it on the air was amazing – warm and sweet as honey. (It was years before I realized that the reason it smelled like honey was because the heather was where the local bees collected their nectar, and that it was the honey that smelled of the moors, rather than vice versa. But anyway.)

10 - What other writers or writings are important for your work, or simply your life outside of your work?
Too many to mention properly. Faulkner. Borges. David Foster Wallace. Melville, too – I go back to Moby Dick a lot. And then a couple contemporaries of mine from the UK – Sarah Hall and Benjamin Markovits: they're both great writers, and they set a very, very high bar for competition...

11 - What would you like to do that you haven't yet done?
Finish the next book.

12 - If you could pick any other occupation to attempt, what would it be? Or, alternately, what do you think you would have ended up doing had you not been a writer?
I never planned on becoming a writer in the first place, so this is an easy one. I'd studied International Relations at university, and had been offered a job as a diplomat, in the British Foreign Office. But I'd deferred entry so I could travel for a few months, and during that time, while I was up in the north of Pakistan, I fell very ill, with some kind of a virus. They never found out exactly what it was, but I was sick for years – shivering and exhausted the whole time. And so that job eventually drifted out of view, and during the long illness and convalescence – which took ten years – I started writing. Not with a view to making a career out of it, but after a while I found a voice and a confidence in the work, and I found people who liked what I was writing. For a while I really regretted not being able to do the career I'd chosen, but I've been lucky, and I'm very happy to have found writing.

13 - What made you write, as opposed to doing something else?
I'd always been a reader, but to the extent where I could see how rare great writing was, and that had always put me off writing. The hubris of it, I guess. But there wasn't much else I was able to do, and I had a lot going on in my head during those years, which had to find its way out somehow, and it came out on the page. (I used to dream pages of text when I first started, though happily (or sadly) things are little less intense these days.)