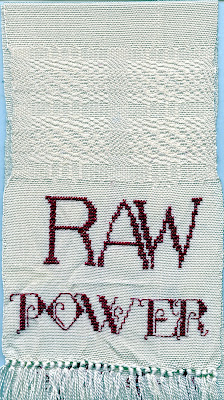 Maria Damon is the author of The Dark End of the Street: Margins in American Vanguard Literature and Postliterary America: From Bagel Shop Jazz to Micropoetries and the chapbook meshwards; the co-author (with mIEKAL aND) of Literature Nation, Eros/ion, and pleasureTEXTpossession; and the co-editor (with Ira Livingston) of Poetry and Cultural Studies: A Reader.

1 - How did your first book change your life? How does your most recent work compare to your previous? How does it feel different?
My first book, Dark End of the Street: Margins in American Vanguard Poetry, changed my life in very pragmatic terms. Although I didn’t think of it as such at the time–for me it was a soul effort–, it was essentially a “tenure book,” so it secured my employment situation, which is extremely important especially given the difficult economic situation in the US right now.  It also opened me up to a whole community of writers and scholars who read the book and saw me as part of their discourse community; I met, most memorably, Charles Bernstein, Bob Perelman and Barrett Watten, Alan Golding, and Hank Lazer all at the same conference. I thought that Language poets would hate my work because it was so identitarian, but they were very receptive and kind, and some of these relationships have lasted many years. Charles introduced me to the Poetics List, which was very lively in the mid-1990s, and from there I met and ended up collaborating with a number of poets who now comprise my community.

2 - How did you come to poetry first, as opposed to, say, fiction or non-fiction?
Through rhythm, and through the daily recitation of the 23rd psalm in grade school before prayer was banned in the public schools. In the third grade every morning we would be asked to lay our heads on our desks while the teacher recited the psalm and we followed as best we could. It was a respite from the constant anxiety of interacting with other kids, an opportunity for contemplation and enjoyment of language.

3 - How long does it take to start any particular writing project? Does your writing initially come quickly, or is it a slow process? Do first drafts appear looking close to their final shape, or does your work come out of copious notes?
That’s a hard q to answer. Writing projects often start at someone’s instigation: an invitation to collaborate, for example, or an invitation to contribute to a volume or journal.  My writing has become far more interactive and participatory than it was when I first started writing. Initially I would write in response to a text; now it is more often in response to a person.

4 - Where does a poem usually begin for you? Are you an author of short pieces that end up combining into a larger project, or are you working on a "book" from the very beginning?
I often have ideas for books that do not materialize as books. I write short pieces that are thematically overlapping and then string them together as books, blogs, etc.

5 - Are public readings part of or counter to your creative process? Are you the sort of writer who enjoys doing readings?
I get very shy about readings, because I am not always sure I have material to read. Right now I’m doing cross-stitch visual poetry, which can’t simply be read at readings. I need projection capabilities, which often isn’t available.

6 - Do you have any theoretical concerns behind your writing? What kinds of questions are you trying to answer with your work? What do you even think the current questions are?
In my scholarly work I am interested in expanding definitions of poetry, in individual eccentric or “outsider” poets and hence in outsider poetics, ethnographies of poetry and poetry communities, etc.

In my poetry I like to play with others. I suppose that’s a politics and a set of questions, but if, to paraphrase Frank O’Hara, you don’t go on your nerve, i.e. go forward somewhat instinctually, something will be lost. I don’t think it possible to “overthink” scholarly enterprises, but I do think it’s possible to kill the creative process with too much tinkering. I guess I’m guilty of “using” poetry as an escape hatch, then.

8 - Do you find the process of working with an outside editor difficult or essential (or both)?
It doesn’t come up very often.

9 - What is the best piece of advice you've heard (not necessarily given to you directly)?
“Enjoy your breath.”

10 - How easy has it been for you to move between genres (poetry to critical prose)? What do you see as the appeal?
Difficult to maintain equal interest in both concurrently; I tend to work in cycles. At the moment I’m drifting away from an investment in my own powers of critical analysis. Much of what I sought to accomplish–a paradigm shift in poetry scholarship–has been accomplished, so that I am not burning with that mission any more. I like to make things now, and trust others to carry forward the mission to democratize poetry and poetics.

11 - What kind of writing routine do you tend to keep, or do you even have one? How does a typical day (for you) begin?
I wish I had one! I begin by making coffee, then retiring to the study to catch up on email and social media. Then I turn to the tasks of the day. Often “my own work” gets pushed to the edges due to the obligations of teaching and participating in institutional life.

12 - When your writing gets stalled, where do you turn or return for (for lack of a better word) inspiration?
I bounce off extant texts. I’ll do a homophonous translation, or a rewriting of someone’s algorithmic spewings. I’ve done a whole book of rewritings of Finnish poet-composer Jukka-Pekka Kervinen’s algorithmic “poems” that he posts on the Wryting and Theory listserv.

13 - What fragrance reminds you of home?
The mixture of sea air and roses on Cape Cod.

14 - David W. McFadden once said that books come from books, but are there any other forms that influence your work, whether nature, music, science or visual art?
Mostly books or shorter pieces of writing.

15 - What other writers or writings are important for your work, or simply your life outside of your work?
Jean Genet, Gertrude Stein, Will Alexander, Thich Nhat Hanh, Edmond Jabès, Ntozake Shange, Facebook. I used to like to read mystical work like Julian of Norwich and The Cloud of Unknowing. Dante. St. Augustine.

16 - What would you like to do that you haven't yet done?
Bungie cord jumping, snowboarding, singing in public (after much practice), overcoming all kinds of fears and inhibitions.  I wanted to have a house made of jewels, but after mIEKAL aND and I published Literature Nation online, I felt that I had accomplished that.

18 - What made you write, as opposed to doing something else?
I think loneliness, initially, as a kid. The need to talk to someone who wouldn’t judge or push back, i.e. nobody. My version of the invisible friend. I kept extensive journals. Now I don’t write in journals so much any more. As I say, it’s more interactive now. I even prefer to do my cross-stitch visual poems in public settings–conferences, meetings, parties, etc., where I can be interacting with others while still creating something.  Also, the household of my childhood was filled with verbal whimsy: no pun went unpinned, the cornier the better. So playing with sound through language is a natural fit. At the same time, it was the great novels of interiority (Bronte, Dostoyevski, Genet) that moved me.

20 - What are you currently working on?
A series of handwoven scarves with Stooges song titles etc. on them for members of Iggy and the Stooges band and fan community. Black cotton with red cotton embroidery thread. I’m working on a proposal for a book on Stooges’ fan culture and the “glories of failure.”