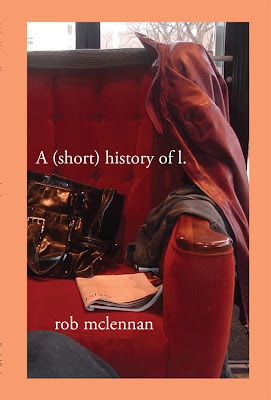 My most recent poetry collection, A (short) history of l. (BuschekBooks) is now available. To order, check the BuschekBooks website, or drop $20 (outside Canada, $20 US) and I'll mail you a copy. Copies will also be available at the fall edition of the ottawa small press book fair, November 5, 2011.

rob mclennan’s A (short) history of l. is a collection of short, sharp, tight, lyric love poems, written still under the influence of the Canadian ghazal (as brought into Canadian literature through British ex-pat John Thompson), writing evasive and disparate leaps between lines that leave the connection sometimes thin, and often open-bare. How far can a poem go when so many seemingly unconnected references are woven through the text, the idea of the “love poem,” including science, popular culture, old film stars, historical characters? A (short) history of l. works to specifically place these poems firmly in the immediate world, one that includes the whole world and not just compartmentalizing “love” away from all else. When we love, do we lose our interest in the world?


“Challenging but never cryptic, intimate but never insular, these poems deftly walk a series of fine lines. mclennan is a master at writing the particular details of any mo­ment in such a way that the reader is free to imagine the larger structures of feeling and meaning. The results are exhilarating!”
Andy Weaver, author of Gangson

“Oh, the stubborn heart. A (short) history of l. read with the urgency of “an impossible narrative.” Hunger, longing, desire, confusion, ache...what more did you want? mclen­nan has carved an ancient story new. These are poems to fall into without regret.”
Rhonda Douglas, author of Some Days I Think I Know Things

The author of more than twenty trade books of poetry, fiction and non-fiction in a number of countries, rob mclennan has published work in over two hundred trade journals in fourteen countries and three languages, and performed in Ireland, England, Wales, the United States and across Canada. His most recent titles are the poetry collections Glengarry (Vancouver: Talon, 2011), kate street (Chicago: Moira, 2011) and 52 flowers (or, a perth edge) (Japan: Obvious Epiphanies, 2010) and a sec­ond novel, missing persons (Toronto: The Mercury Press, 2009). In 1999, he won the CAA/Air Canada Prize for most promising writer (in any genre) in Canada under the age of thirty, and spent the 2007-8 academic year in Edmonton as writer-in-res­idence at the University of Alberta, and, since June 2003, has been regularly posting reviews, essays, interviews and other notices at robmclennan.blogspot.com. rob lives in Ottawa, Ontario.