As soon as I open my mouth, vowels and consonants pour out into a disorderly mess and I have stopped trying to control it. I discipline myself enough to try writing, but after a dozen lines I stop out of exhaustion. I need to find a way that doesn't demand too much physical effort.
When I bought my old Remington 22, a quarter century ago, I did it to adopt a new style. Tougher, more intense than before. Writing by hand seemed too literary. I wanted to be a rock 'n' roll writer. A writer of the machine age. Words interested me less than the sound of the keyboard. I had energy to burn. In my narrow room on Saint-Denis Street, I spent all day typing feverishly in the dark. I worked, the windows closed, bare-chested in summer's furnace room. With a bottle of cheap wine at my feet. 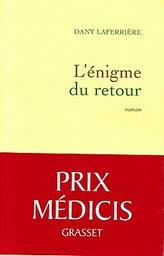 In Montreal author and Hatian ex-pat Dany Laferrière's fourteenth novel, The Return (trans. David Homel; Vancouver BC: Douglas & McIntyre, 2011), he continues his explorations blurring the lines between novel, memoir and essay, blurring fact with the intensity of the truth. Originally composed in French and published as L'énigme du retour (2009), the book follows Laferrière's narrator, the semi-fictional Dany Laferrière, through the discovery of the death of his exiled father in New York, a man who left Haiti in the 1960s, and continues as the two return to the country they had both left behind. Journalist Dany Laferrière infamously left Port-au-Prince suddenly in 1976, after one of his friends, a journalistic colleague, had been killed by Baby Doc Duvalier's regime, ending up in Montreal where he started writing. A book, he once wrote, to save his life, later published as his most well-known work, Comment fair l'amour avec un Nègre sans se fatiguer (1985), which appeared as a film, was translated and published by Coach House Press as How to Make Love to a Negro (without getting tired) (1987), recently reissued by Douglas & McIntyre.

We want to retrieve the suitcase my father deposited at the Chase Manhattan Bank. Since I have the same first name, the employee gives me the key to his safety deposit box and asks me to follow him into the bank's vault. I step inside quietly with my uncles. That quality of silence exists nowhere but in a bank, a church or a library. Men fall silent only before Money, God and Knowledge—the great wheel that crushes them. All around us, small individual safety deposit boxes filled with the personal belongings of New York, city of high finance and great misery. The employee leaves us alone. I open my father's box and discover an attaché case inside.
I try to open it before realizing I need the secret code. Numbers and letters. We try everything: his birth date and his different given names, my birth date and my pseudonym. My uncles give me all sorts of possible leads, even the date their childhood friend met a violent death. As a last resort, we try his last telephone number before his mind went adrift. Nothing works. In the end, the employee returns, and we have to put the suitcase back. I could not have taken it with me without first answering a battery of questions that would have unmasked me. I slip the suitcase back into the safety deposit box. The employee closes the great vault of the Chase Manhattan Bank behind us.
My uncles stand in disbelief
in front of the iron door.
I feel light
not having to carry such weight.
The suitcase of aborted dreams. (“The Suitcase”)

For those unaware, Laferrière has been one of my favourite writers for years, ever since Coach House Press released English translations of two of his novels on the same day, way back in 1994, his Dining with the Dictator and Why Must a Black Writer Write About Sex? His prose has always had the ability to wrap itself around the reader's organs and take hold, slowly at first, before becoming a part of the body. This novel is no different, digging deep through a minefield of emotional and physical detail with compassionate honesty. There are emotional connections that Laferrière has always managed with his prose that bring the reader immediately in, done so well that it makes most other writing appear distant, even false. How does Laferrière manage to bring one in so quickly? Instead of his usual straightforward (comparatively) prose of all of his books save one, the poetry collection A Drifting Year (Vancouver BC: Douglas & McIntyre, 1997), The Return uses poems and prose to tell an extended narrative of the explosion of emotions around the death of an absent father, and the return to a homeland and family long left behind. But again, anyone who has read any of Laferrière's previous works knows that he might have left Haiti, but he certainly never left it behind. But does that make a return for the narrator/author Dany Laferrière easier or that much more difficult? This is, as one of the blurbs on the cover attests, a stunning and breathtaking book, and is easily one of his best.

Every family has its absent member in the group portrait. Papa Doc introduced exile to the middle class. Before, such a fate was reserved only for a president who fell victim to a coup or one of those rare intellectuals who could also be a man of action.
I took all possible precautions
before announcing to my mother
that my father had died.
First she turned a deaf ear to me.
Then took it out on the messenger.
The distance is so slight
between lengthy absence and death
that I didn't take enough care
to consider the effect the news would have on her.
My mother won't look at me.
I watch her long delicate hands.
She slides her wedding band
on and off her finger
and hums so softly
I have trouble understanding the words of her song. (“My Mother's Song”)

Posted by rob mclennan at 9:01 AM
Labels: Dany Laferriere, douglas and mcintyre

I picked up a copy of the Return after reading your review of it (having recently read I Am a Japanese Writer). I went to see him yesterday in Brantford at a very small IFOA Ontario event and had a chance to speak with him. What an incredible man, a great voice and a great reader. It certainly made me wish my French was better.

This was the first of his books that I've read (though I've gathered some on my shelves over the years), but it definitely won't be the last.