Our Hallowe'en costumes: Doctor Who and Idris 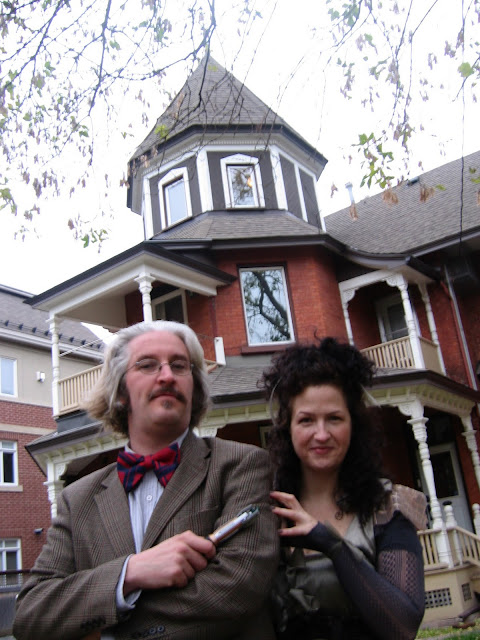 Strange, isn't it? This is possibly only the second year I've dressed up in nearly thirty years, when I used to take my younger sister around Maxville to trick-or-treat, our mother waiting for us in the car. We walked the village with pillowcases, most often to houses our mother knew, my sister dressed as whatever she was that year, and myself, borrowing one of my father's caps, achieving perhaps the laziest costume-making possible. I'm a feed salesman, I'd tell them. And then I'd empty my pillowcase in the car after every third or fourth house, so people might think we had only begun, and perhaps offer more. Terrible.
I don't even want to get into my ill-fated Morpheus (a la Neil Gaiman's The Sandman) costume from the mid-1990s.
This year, Christine and I went to a house-party as Matt Smith's Doctor Who and the TARDIS-in-human-form, Idris (from that episode written by Gaiman; are we noticing a theme, anyone?). Here's a picture of the two of us [by Cathy McDonald-Zytveld] in costume in front of our new residence, the third floor of a century-old house on McLeod Street. And yes, we actually live in the turret. During our outside photo shoot, we even managed to finally meet our downstairs neighbours, as they came outside to admire Christine's costume, and show off their own (“Bride-zilla” and “Rogue,” from X-Men) 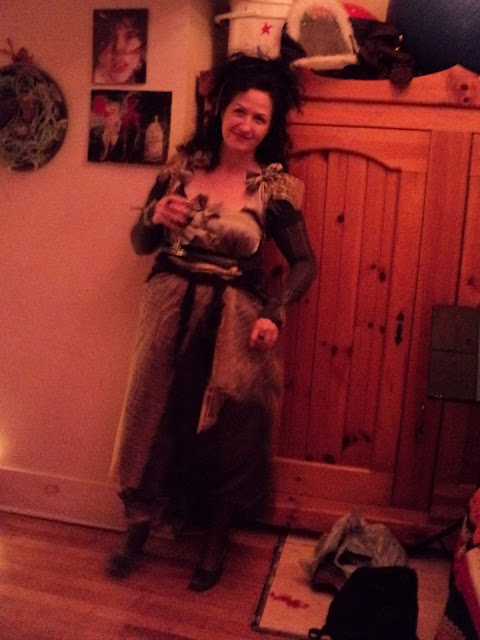 Christine spent three days putting the costume together from an array of material, and I'm impressed at just how much she looked like Idris herself; damned sexy.
Still, one of the few people at the party who understood our costume was a young twentysomething, Anna, dressed in Ukrainian garb. She even had, in her purse, sonic screwdrivers for both Doctors ten and eleven, as well as a Doctor Who sound effects hand-held device. All of these carried completely unrelated to Hallowe'en and the party (apparently she doesn't often tell folk she carries these things around with her). Hilarious! 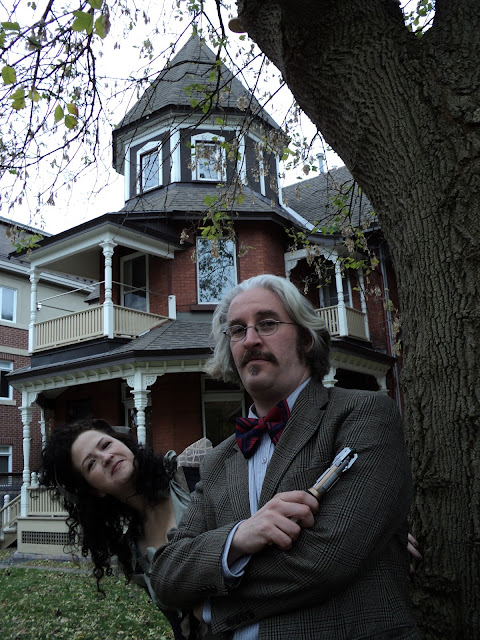 Part of what I always find entertaining about making public declarations of any of my particular interests—my collection of some 6,000 comic books (almost exclusively Marvel, with some Vertigo thrown in as well), or my adoration of the Doctor Who reboot six seasons ago—is in seeing just who ends up responding, whether Rusty Priske mentioning his appreciation of the work of Brian Michael Bendis, or this Doctor Who/Silence fan video that Adeena Karasick sent, made by her daughter, Safia. My favourite, still, a comic book conversation with Thomas Wharton while over for dinner; we knew it was bad when we realized even his then-five and ten year old sons looked bored by it. And any conversation I've had with Toronto YA author Leslie Livingston is enough to drive anyone away with a roll of their eyes.
Still, questions remain: will we ever figure out, who was piloting the TARDIS at the end of Matt Smith's first season? That whole damned season was set up as a trap for the Doctor, far more complex than the other, smaller trap of the Pandoricum; the things in Amy's room set the trap for the Pandoricum by the Daleks, Cybermen, etc., but the crack in the wall was the result of the explosion, which was done by someone else. Who was it pulling the strings to make the TARDIS explode in the first place? The whole plotline feels as though it's been set aside. Yes, the “Let's Kill Hitler” episode wrapped up a few too many other threads up too quickly, but the season's final episode was quite magnificent.
Will the next season finally bring Doctor number eleven back to the mystery of who took control of the TARDIS? I suspect the only one who might hate the Doctor that much could only be himself (was the dream episode a clue?); is it a fragment of the Doctor himself, whether internal or external, working some large multiple-season plot? Why all these loose ends? Why does every new Doctor since the reboot then become my new favourite?
Bowties are cool.
Posted by rob mclennan at 9:01 AM
Labels: Adeena Karasick, Cathy McDonald-Zytveld, Christine McNair, costume, David Scrimshaw, Doctor Who, Hallowe'en, Idris, Rusty Priske, Thomas Wharton

Bowties are definitely cool. And Christine looks *awesome* as Idris. (It's the hair, maybe? The dress is startlingly close too. Nice work.)

And I'm adding to the glaze factor of non-Whovians reading this... yeah, who the hell WAS piloting the TARDIS? She's always had a bit of a mind of her own, but she wouldn't be trying to blow herself up or kill the Doctor... Don't tell me the Time Lords are *still* remote operating it the way they did circa 1970...

To be a bit more serious though, I think they might very well leave that plot thread alone (sorry.) Unexplained, un-tied-up stuff happens all the time on that show. They sort of just leave it open for people to explain to themselves if they want to. (Or, for someone to pick up in twenty years or so and turn into a new episode.)

I now return you to your regularly scheduled clever blog.

FABULOUS! Amazing running into you and your lady at the Farmer's Market!