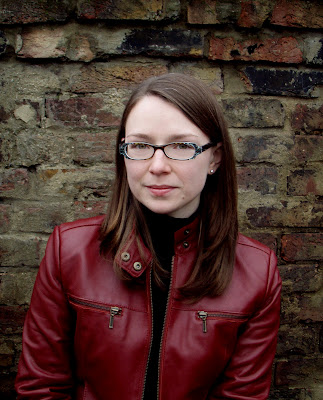 Laura Boudreau is the author of Suitable Precautions, a collection of short fiction. Her short stories have appeared in a variety of literary journals and anthologies, including The Journey Prize Stories 22, Canadian Notes & Queries, 10: Best Canadian Stories, The New Quarterly, and The Fiddlehead. She is the winner of the 2009 PRISM International Award for Short Fiction. She lives in London, England.

1 - How did your first book change your life? How does your most recent work compare to your previous? How does it feel different?
Suitable Precautions is my first book, and it was a terrifying experience to see it for the first time. Here was something I was intimately familiar with — every word, every comma — and yet there it was in a completely unfamiliar form. It was uncanny (paging Dr. Freud...) and extremely gratifying, and I felt sick to my stomach. Which went some way towards settling an argument amongst my friends: it is, I think, possible to be so happy that you barf.

Now that the book is out in the world, I feel more confident about and secure in my writing, and also excited to tear down all my old architecture and start again from scratch. We’ll see what comes of that.

2 - How did you come to fiction first, as opposed to, say, poetry or non-fiction?
Plagiarism. I remember stealing one of my dad’s bedtime stories and repurposing it in kindergarten. It went over really well, and I was hooked. Narrative just makes sense to me, and I enjoy the freedom that comes from not being tied to objective truths or facts.

3 - How long does it take to start any particular writing project? Does your writing initially come quickly, or is it a slow process? Do first drafts appear looking close to their final shape, or does your work come out of copious notes?
Things usually start slow, creeping along, paragraph by paragraph, until I’m tapped out. When I come back to the piece, I start from the beginning, reading and revising to get into the right mindset before adding anything else. The image I keep in my head is that of a Japanese rock garden: I think about raking the gravel again and again until it’s completely smooth. As a result, my first drafts tend to look very similar to my final drafts, though there have been some exceptions.

4 - Where does fiction usually begin for you? Are you an author of short pieces that end up combining into a larger project, or are you working on a “book” from the very beginning?
My story “Strange Pilgrims” began with a conversation I had with a mailman. “Hurricane Season” started with me seeing a book cover that featured a woman in a bikini. “Way Back the Road” was more of a thematic project — I wanted to try writing a story about, or at least involving, religion. “The Dead Dad Game” came to me as a title first, and then I had to figure out a story to match. As a result, Suitable Precautions is a diverse collection in which each story can — and must — also stand alone.

There’s a line in an Isaac Bashevis Singer story that resonated with me while I was trying to bring these stories together: “She gained the kind of knowledge that comes from staying at inns and listening to all sorts of talk... [She] learned how vast the world was and how odd people could be.” I like to think of Suitable Precautions in that way — that it’s made up of stories from travellers who are seemingly unrelated, and yet bound together by bonds they can’t exactly name.

5 - Are public readings part of or counter to your creative process? Are you the sort of writer who enjoys doing readings?
I like readings. I think of them as part reward, part test, part show, and so they necessarily come after my creative process, which is a private one. I read aloud as I’m working, which I think helps when it comes to public readings, but that’s not the reason I do it. If it sounds right out loud, it’ll sound right in your head, which is the way most of my readers will encounter these stories.

6 - Do you have any theoretical concerns behind your writing? What kinds of questions are you trying to answer with your work? What do you even think the current questions are?
I have concerns, but I don’t think of them as theoretical. My concerns are about people and relationships, and the real-life consequences of people being in those relationships. I think the questions I’m asking are the kind that you might overhear on a city bus: Why is he being like that? What happened to her? Where do we go from here?

7 – What do you see the current role of the writer being in larger culture? Does s/he even have one? What do you think the role of the writer should be?
I think writers are observers and entertainers. Some are critics. In my opinion, they are not unacknowledged legislators (Shelley was a bit full of it on that one). I don’t think writers — myself included — are necessarily smarter or more insightful than non-writers; they just can get it out there better. There’s a responsibility that comes along with that talent, but also an inherent danger. I’m reminded of something Denis Johnson said: “And I realized that what I first require of a work of art is that its agenda — is that the word I want? — not include me.”

8 - Do you find the process of working with an outside editor difficult or essential (or both)?
Depends on the editor. To riff on one of my favourite children’s poems, when it’s good it’s very very good, and when it’s bad it’s horrid.

9 - What is the best piece of advice you’ve heard (not necessarily given to you directly)?
Mark Strand, in a writing master class, once said (or perhaps said that someone else said?) that the conclusion to a piece should be at once completely surprising and totally inevitable. I strive for that.

10 - How easy has it been for you to move between genres (short stories to journalism to the novel)? What do you see as the appeal?
The appeal of switching it up? Money, mostly. Seriously. Short stories are a tough sell. Not like journalism is a path paved with gold, but at least the rate per word is more encouraging, and the whole exercise is generally time limited. I also genuinely enjoy meeting and interviewing people. My favourite interview to date was with a Jungian psychoanalyst in Zurich. His office was the land that the 1970s forgot, and we faced off in these huge arm chairs. There was definitely a Running with Scissors feel to it. It’s nice to have an excuse to do things like that, to have a way to get access. As far as novels go, the challenge is appealing, as is the respectability and marketability of the form. I have a feeling it’s going to be a difficult jump, but that’s my next move.

11 - What kind of writing routine do you tend to keep, or do you even have one? How does a typical day (for you) begin?
I recently quit my job, so my typical day has gone out the window. It’s delightful and strange, and I’m trying to make the most of it, because it’s not going to last. I tend to do my best writing in the evening or at night, but I’d like to find a way of shifting it to the morning. I think that would be more productive, and more in line with the rest of the daily goings-on of the world.

12 - When your writing gets stalled, where do you turn or return for (for lack of a better word) inspiration?
The shower. I don’t know why it works, but it does.

13 - What fragrance reminds you of home?
The smell of my husband’s favourite old t-shirt.

14 - David W. McFadden once said that books come from books, but are there any other forms that influence your work, whether nature, music, science or visual art?
Sometimes music. I won’t say which artists or albums, just in case I get sued.

15 - What other writers or writings are important for your work, or simply your life outside of your work?
Denis Johnson, Lorrie Moore, Michael Winter, Daniel Scott Tysdal, David Bezmozgis. My all-time favourite short story is “Symbols and Signs” by Vladimir Nabokov. A close second is “Brothers and Sisters Around the World” by Andrea Lee. I couldn’t keep writing if I didn’t return to these stories now and again.

16 - What would you like to do that you haven’t yet done?
Go to China.

17 - If you could pick any other occupation to attempt, what would it be? Or, alternately, what do you think you would have ended up doing had you not been a writer?
I’d like to be a stage actress, but I think I’m too uptight. Also, wouldn’t I need to be taller, or at least thinner? I think I would have made a good teacher, and I hope to have the opportunity to test out that theory at some point.

18 - What made you write, as opposed to doing something else?
If I knew that, maybe I could cure myself and others of the disease. Writing is a profession based on rejection and poverty, and that can’t be healthy. Then again, not many addictions are.

I’m a good writer, and I think I have some interesting things to say. That hasn’t been true with other jobs I’ve had. I guess I’m also a sucker for the promise (if not the realization, or reality) of fame. But the kind of Smart Person Fame™ that doesn’t require you to get plastic surgery. The kind of fame where you can buy fruit from the market without getting hassled by paparazzi.

20 - What are you currently working on?
What to wear for my book tour. Just in case the paparazzi do show up.

Laura Boudreau reads in Ottawa on Thursday, October 6, and Montreal on Friday, October 7 as part of a Biblioasis tour with Rebecca Rosenblum and Cathy Stonehouse.
12 or 20 (second series) questions;
Posted by rob mclennan at 9:01 AM
Labels: 12 or 20 questions, Biblioasis, Laura Boudreau