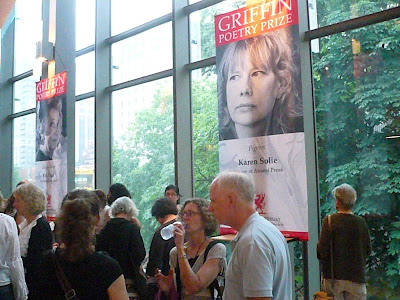 On June 2, Lainna and I went to the reading for the Griffin Poetry Prize shortlist; the tenth for them, the first for us, with magnificent readings by all involved. But how the hell did she manage to get us front row centre?

And do you think Solie gets to keep such a magnificent banner with her picture on it? I think I'd want to own such a thing (whether or not I'd want to display it in my home might be a different matter; special occasions, perhaps).

We got caught in the rain, we heard magnificent readings from a weighty stage that included the shortlist themselves, Dionne Brand, and judge Anne Carson, who I think easily won for best outfit (orange socks, well done. Is there anything this woman can't do?). We saw friends old and new alike, including Andy Weaver, Priscila Uppal and Christopher Doda, Don McKay, Erin Knight and Adam Dickinson, Lisa Pasold, Matthew Tierney, etc. 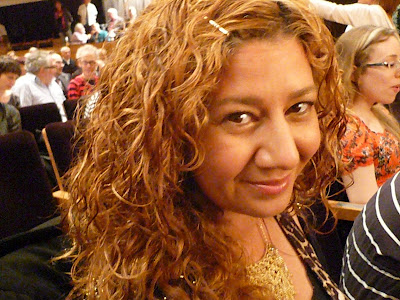 Congrats to Karen Solie, well done and well deserved. Maybe if I move to Toronto I can start getting on lists?

And did I mention that founder/host Scott Griffin is a class act? Class act, sir.

Here's the press release that the Griffins sent out today:

TORONTO, June 3, 2010 - Eilean Chuilleanein's The Sun-fish and Karen Solie's Pigeon are the International and Canadian winners of the tenth annual Griffin Poetry Prize.

The Griffin Poetry Prize was founded in 2000 to serve and encourage excellence in poetry. The prize is for first edition books of poetry written in, or translated into, English, and submitted from anywhere in the world. In celebration of the prize's tenth anniversary, The Griffin Trust For Excellence In Poetry doubled the annual prize money to a cumulative amount of $200,000 (which includes $10,000 for each of the shortlisted poets who participated in the Readings). 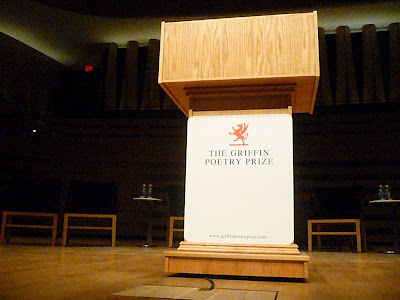 The awards ceremony, attended by some 400 invited guests, was held in the Fermenting Cellar at the Stone Distillery and hosted by Scott Griffin, founder of the prize, and Trustees Margaret Atwood, Carolyn Forche, Robert Haas, Michael Ondaatje, Robin Robertson and David Young. 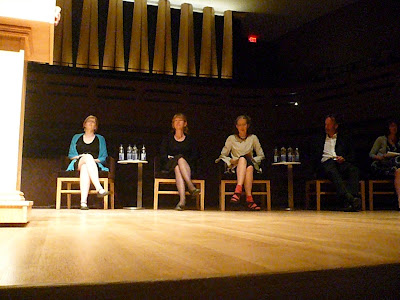 [l-r: Hall, Solie, Carson...] Judges for the 2010 Griffin Poetry Prize are the distinguished writers and poets Anne Carson (Canada), Kathleen Jamie (Scotland) and Carl Phillips (United States). They read almost 400 books of poetry, including 12 translations, received from 12 countries around the globe.
The judges are selected on an annual basis by the Trustees of The Griffin Trust For Excellence In Poetry.

On the previous evening, the shortlisted poets read excerpts from their books at a sold-out event for more than 1,000 people at The Royal Conservatory, TELUS Centre for Performance and Learning, Koerner Hall.
The 2010 Griffin Poetry Prize shortlist features collections by three Canadian poets - Kate Hall's The Certainty Dream, published by Coach House Books; Coal and Roses by the late P. K. Page (a selection of which was read by Toronto Poet Laureate and 2003 Griffin Poetry Prize shortlisted poet Dionne Brand), published by The Porcupine's Quill and Pigeon by Karen Solie, published by House of Anansi Press; and four international poets - John Glenday's Grain, published by Picador; Louise Gluck's A Village Life, published by Farrar, Straus and Giroux; Eilean Chuilleanein's The Sun-fish, published by The Gallery Press and Susan Wick's translation of Cold Spring in Winter by Valerie Rouzeau, published by Arc Publications. 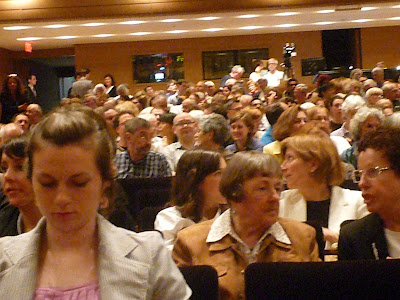 [Andy Weaver, staring back at us in our front row seats] Also that evening, renowned American poet and essayist Adrienne Rich was honoured with the 2010 Lifetime Achievement Award. Trustee Carolyn Forche paid tribute to Rich and presented her with her award.

Trustee David Young presented each poet with a leather-bound edition of their book.

The Griffin Poetry Prize Anthology: A Selection of the 2010 Shortlist, edited by A. F. Moritz and published by House of Anansi Press, is now available at most retail bookstores. Royalties generated from the anthologies, published annually, are donated to UNESCO's World Poetry Day. As in past years, copies of the submitted poetry books are being donated to Corrections Canada.
Posted by rob mclennan at 9:45 PM
Labels: Griffin Poetry Prize, Karen Solie, Lainna