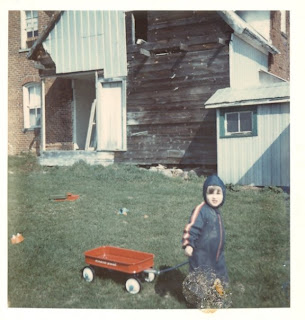 Pearl Pirie's over my dead corpus is a feast of sounds, playful and thoughtful poems culled from the corpus of the world. "The main source corpus is over 500 pages of scrap notes that served as fodder for
recombinance. Words or phrases were scraped for letter sequences within syllable or that broke across syllable or word. The other corpus is incidental word combinations from scrabble strung in the mind's insistence for meaning or sound." Pearl Pirie

in house : a (tiny) memoir, rob mclennan tells us about his childhood in Glengarry County by way of old family photos, his own memories and recollections from family. "Home is a series of recollections, of
distances, as easily remembered as mis-remembered, and a blending of events that can sometimes never be confirmed. "And why write as a 'memoir' instead of calling them 'prose poems'? I want these stories not to be misunderstood; I want them to be seen as what I remember, what I believe to be true, from my vantage point of some three decades later, and thousands of miles. It felt like reclaiming something that had been far away for a very long time, but no longer. It felt like bringing out the good out from underneath all the bad that came later, overshadowing so much of what had happened before."
rob mclennan

if you are in Ottawa, please attend the launch of over my dead corpus on Friday, June 25 at 7:00pm at the Carleton Tavern, 223 Armstrong St, upstairs. Pearl will be reading as part of the pre-small press fair reading along with Faizal Deen, Mark Goldstein and Myna Wallin.

The chapbooks will be available at the small press fair on Saturday or if you can't make it, at www.angelhousepress.com via Paypal or through other means by contacting me directly at amanda@angelhousepress.com