12 or 20 questions: with Billie Livingston 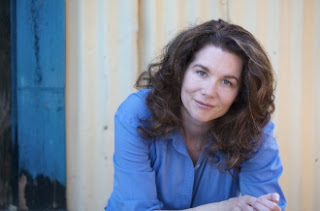 Billie Livingston [photo credit: Braden Haggerty] is a fiction writer, poet, and sometime essayist. Born in Hamilton, Ontario, she grew up in Toronto and Vancouver, and has since lived in Tokyo, Hamburg, Munich, Los Angeles and London, England. Her first employment was filling the dairy coolers in a Macs Milk. She went on to work varying lengths of time as a file clerk, receptionist, cocktail waitress, model, actor, chocolate sampler, and booth host at a plumber's convention. She lives with her husband in Vancouver.

1 - How did your first book change your life? How does your most recent work compare to your previous? How does it feel different?
With my first novel, Going Down Swinging, I’d been slogging away for so many years—six or seven, trying to figure out what I was doing and where I was going with it—that I felt as though I must seem like the crazy cat lady down the road, covered in loose fur and kitty litter. I didn’t want to call myself a writer for fear people would think it was just an affectation. When the book was accepted for publication I felt vindicated, as if I could finally say it out loud without embarrassment. Publishing also introduced me to some interesting and terrific people whom I never would have otherwise met. It put me into completely unfamiliar situations, and forced me to rise to the occasion, which is always, ah… character-building.

The new book, Greedy Little Eyes, is a short fiction collection. This will be my fourth book and I have no more certainty now than I did with the first. You never know what’s going to happen when a new book comes out.


2 - How did you come to poetry first, as opposed to, say, fiction or non-fiction?
Though my poetry collection was published after my first novel, I did write poetry first. My poems were sort of micro-fictions. I suppose I wrote poetry as a way to understand characters and the impact of situations that may seem like fleeting moments. Many of the early poems later expanded and became Going Down Swinging.

3 - How long does it take to start any particular writing project? Does your writing initially come quickly, or is it a slow process? Do first drafts appear looking close to their final shape, or does your work come out of copious notes?
It’s been different with each book. The writing initially comes quickly because I don’t want to impose much in the way of self-editing on a first draft. I try to write from the gut. No one’s going to see my first draft so I allow myself the weird and foolish and just hurl it all out on the page. Then I go back and pull and twist and rewrite. It’s unusual for my first draft to look close to its final shape.

4 - Where does a poem or prose usually begin for you? Are you an author of short pieces that end up combining into a larger project, or are you working on a "book" from the very beginning?
Usually it comes from hearing a voice in my head. Especially with short stories, I start to feel a little like Sybil. I try to write down everything the voice says and then I reread it later and sort out the story. Usually it combines with something I saw or overheard. One of the stories in Greedy Little Eyes, for instance, sprang from a day at work (my rent-paying job) when one of the guys came back from lunch looking particularly shaken. He’d just received a call informing him that one of his close friends was dead. Her boyfriend had shot her in a cabin on Vancouver Island. They had no phone so she bled to death. My work friend couldn’t make sense of it. He asked me if I’d write something for him, a poem or a story. He felt, I guess, as though he wanted someone to transform it into something he could get his head around.

Each book has happened a little differently. With the novel I’m working on now, I’ve been writing short chunks, experimenting with voice until I really know the characters.

5 - Are public readings part of or counter to your creative process? Are you the sort of writer who enjoys doing readings?
I have a huge dread when it comes to public readings and find it hard to write on a day that I know that I’ll have to read. It’s a bit crazy because I often enjoy reading in public as I’m doing it but I get terrible anxiety beforehand.

6 - Do you have any theoretical concerns behind your writing? What kinds of questions are you trying to answer with your work? What do you even think the current questions are?
I don’t begin a story with a theme in mind or a question per se. But they do crop up. Often the questions involve judgment. Who, in a particular situation, has the final say on normal and abnormal, worthy and unworthy, what is sacred and what is profane?

8 - Do you find the process of working with an outside editor difficult or essential (or both)?
Working with a good editor can be both exhilarating and terribly humbling.

9 - What is the best piece of advice you've heard (not necessarily given to you directly)?
The only way to get anything written is the AIC method. (Ass In Chair)

10 - How easy has it been for you to move between genres (poetry to non-fiction)? What do you see as the appeal?
I guess it’s happened naturally. One form inspires another. I write whatever I’m drawn to write, though sometimes, writing itself feels like trying to yank veins out of my arm.

11 - What kind of writing routine do you tend to keep, or do you even have one? How does a typical day (for you) begin?
It depends on whether I’m working at my rent-money job on a particular day. I could be there 12 to 14 hours so there’s no time for anything else. If I’m at home, my usual routine is: wake up, wander to the kitchen and throw the kettle on. I bring my laptop back to bed, drink tea and read the online papers and answer mail for a while. Then I go for a long walk, come home and somewhere between eating breakfast and saying goodnight, I force myself to do a minimum of two pages worth of AIC.

12 - When your writing gets stalled, where do you turn or return for (for lack of a better word) inspiration?
Long walks help. And reading. Sometimes when I stall, I just need to read and read and I don’t care if the book I’ve got in my hands is highbrow, lowbrow or deep fried brow. Reading just about anything can suddenly trigger my brain to start firing again in a way that I need in order to get back to work.

13 - What was your most recent Hallowe'en costume?
I was The Devil. I had on a red dress and an old nun’s cape. I wore a black bobbed wig with a pair of red horns. My friend was a country singer who had sold her soul to me. She wore a blonde wig and a cowboy hat and called herself Lola the Goodtime Girl. The guy who showed up as Christ on the Cross looked deeply concerned.

14 - David W. McFadden once said that books come from books, but are there any other forms that influence your work, whether nature, music, science or visual art?
It’s hard not to be affected by what you surround yourself with. I’m influenced by the storytelling of friends, by walks through the supermarket or the park, by newspapers, television, road trips, music, radio, podcasts, museums, graffiti — that’s why I think it’s important to pay attention to one’s surroundings, to feed your brain with more than fluff.


15 - What other writers or writings are important for your work, or simply your life outside of your work?
That would be an endless list. Sometimes it’s really corny, commercial fiction that ends up triggering something. Sometimes it’s dark and beautiful poetry, philosophy, or a brain book about neuroplasticity, the book of Proverbs, a cookbook, The Globe and Mail, The New York Post… I’ve got eclectic taste.

16 - What would you like to do that you haven't yet done?
I’d like to see Italy — and Ireland, and Russian and Costa Rica, Kenya, Australia… I’d like to try out being independently wealthy.

17 - If you could pick any other occupation to attempt, what would it be? Or, alternately, what do you think you would have ended up doing had you not been a writer?
When I was a kid I wanted to be a veterinarian. Later I wanted to be a lawyer. I wish I had the knowledge that would be needed for either of those vocations.

18 - What made you write, as opposed to doing something else?
I always wrote. When I was doing other things I still wrote. Especially while I was employed in the most mind-numbing of vocations, writing kept me sane. The surprise came when someone actually wanted to publish the writing.

Film: I just watched Sunset Blvd again. It’s disturbing and hilarious and astute. The Squid and the Whale was brilliant for similar reasons. I also loved Up—and yes, I cried.


20 - What are you currently working on?
Patience. Discipline. And another novel.