sentence: a journal of prose poetics #7 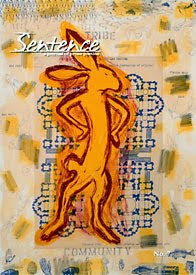 I saw a wave of birds, clenching and relaxing like the breath of an accordion. It lasted for miles. I didn’t tell anyone.

I wished someone good luck without knowing if I had it to give.

(Meghan Horton, “Things I Have Been Doing Instead of Writing Poems”)

The prose poem has always seduced me—I find that the grammar of the sentence truly is glamorous to me. With the sentence it’s more of a losing myself in the balance of phrasing, in the geometry of making that balance fresh each time. I do find each sentence is exciting, even erotic. I always loved parsing sentences in grade school. I don’t do that now—though it would be fun to begin again. I relate to prose thoroughly at the level of the sentence, not at all at the level of narrative. I’m really a gentleman collector of sentences. I display them in cabinets.

I’ve been, over the past few years, very interested in watching poets experiment with the sentence, working my own explorations through them as well, triggered by reading poets such as Robertson, Lisa Jarnot, Juliana Spahr, Sarah Manguso, Margaret Christakos, Sina Queyras and Rachel Zolf. Reading this issue of sentence I wonder, if this is an exploration of the “prose poem,” I’d like to see more of the poets who experiment with the sentence itself? Still, for a journal of over three hundred pages, there are certainly many highlights, such as Ray Gonzalez’ “The Guitars,” that writes out a list of exactly what the title promises, beginning with:

When Bob Dylan unstrapped his acoustic guitar after recording a few songs for Blood on the Tracks, he forgot the two other songs he had been carrying in his head. When he picked up the guitar in the studio again, he wrote a different song that never made it on the record, though the two forgotten songs appeared on bootlegs. The last guitar John Lennon played before he was murdered stood against the cold fireplace in his New York apartment, the leather collar he wore on the cover of Two Virgins tied around the neck of the guitar. When Eric Clapton’s four-year-old son fell out of a 49th floor apartment to his death, there were two electric and two acoustic guitars in the room with the open window.

An essential part of sentence’s mandate seems to be “features,” and this issue includes some seventy pages of new writing in a section called “Contemporary American Indian Prose Poetry,” with pieces by such as Orlando White, Molly McGlennen, Chezia Thompson Cager and others. As Dean Rader writes in his lengthy introduction, “Where Function Invents Form”:

What Native poets ask of genre is often linked to what they ask of language. For centuries, language and its power to transform, record, activate, and animate has been one of Native America’s most powerful weapons. That legacy carries over into poetry. Also located in Native poetry is an ontology of orality, which connects even the most contemporary, most postmodern Native poetry to its incantatory roots. So, moving from “verse” to “prose” can carry with it a number of different significances for Indian writers. It can signal the transition from conversational to ceremonial speaking, the move from chant to song, or even the visual encoding of a linguistic shift from oral to written discourse. “I have written what is called ‘free verse,’” says the great Kiowa writer N. Scott Momaday, “though to my mind that is a contradiction in terms.” Momaday continues: “I’m greatly interested in the so-called ‘prose poem,’ another contradiction in terms, but what I mean is I like writing what is essentially a lyric prose in which I’m not concerned with meter, but with rhythms and fluencies of sound, primarily” (Bruchac 178). For Momaday, prose’s proseness liberates language from the prison house of poetry.

Other highlights include LeAnne Howe’s “Note to Self*,” Paola Corso’s “The Laundress Catches her Breath in Ten Seconds,” Jen Bartman’s lovely and heart-rendering “Dear Sesame Workshop,” (a must read), Rachel Loden’s “The Emperor of Heaven” and Orlando White’s “b,” as well as James Michael Robbins’ piece, that reads in full:


A Merry Little Christmas
At my uncle’s house for the holidays, surrounded by kin, the old grandfather chose me for his story, perhaps because I chose to listen to him yearning for his lost wife, how in the end she lay on the bed, her eyes wild, and told him to take care of her little dog because she loved it so, and then she was gone, her feet, he said, already turning black, and afterward I thought of him and the little dog wearily walking the empty house in the short time left to them, how what we give and receive is left behind and comes to mean almost nothing.