How does one begin? : a poetics at turning forty

Look, I am turning forty, all right?

Let’s just leave it at that.

Can there be such a thing? I’m not sure how far I’ve walked but certainly, it isn’t far enough. Have I arrived to only realize how much further I have to go? Have I only just arrived? Here I am, writing; here I am, taking stock. The ends of a few projects on George Bowering, Andrew Suknaski and John Newlove, the beginnings of other projects including the Canadian long poem, Calgary poetics, Toronto history and literature, an essay on the poetics of Anne Carson, Judith Fitzgerald, Lisa Robertson, Paul Celan and George Herriman’s Krazy Kat. All these works of fiction I keep starting, hoping to finish. Today is my fortieth birthday.

In your twenties, I was saying, you are a cell, interacting. In your thirties you enter time, that is not only yours. In your thirties you become all ways aware of your life as a drama, of the cycle, the place in the pattern your life is now taking, who’s been there & who’s coming. You see that where you are is where Gilgamesh was. The passion takes over, & in art the passion takes over from mere worship, what you were doing in your lyrical twenties. To think that for thirteen years I was completely convinced that I’d die at twenty-nine! 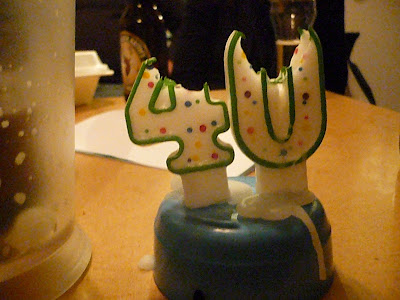 In a recent email to Cameron Anstee, he repeated back an idea I’d given him a day or two earlier, that ten years ago I would have written a poem or two when the big force of an idea hit, instead of the current push to compose a dozen or two or three during the same period of energy, to see how far the poems might go. A push, or a purge. It’s like the drunken tai chi that Fred Wah wrote about in his “Music at the Heart of Thinking” series. If I have learned over the years a poetic, a breath and capable line, a turn of sharp phrase, it should come out naturally, quickly, before the long slow process of editing, pouring over, carving and marking up, and printing new drafts to scribble on again. Building, cutting, moving, adding until the energy of the project is completely spent. How does this compare, on the cusp of forty, to any earlier parts of my twenty or so years of my so-called “serious” writing?

Since my later thirties, my writing seems to have been turning a long corner, moving from focusing on the long poem of my thirties to more prose-based projects, including novels, short stories and creative non-fiction, and aware of shifting concerns, shifting energies and shifting geographies. From Ottawa to Edmonton to Toronto and realizing placement from an entirely new perspective. In an annual taking stock, is this simply the acknowledgment of shifting concerns?

My immediate Chinatown neighbour, jwcurry, once wrote a poem picking on my supposed need to write out the occasion, writing out every fire in the neighbourhood (the example he gave) or, perhaps, this annual birthday poem that has become just as much a deliberate touching-base as habit (I won’t even ask what he might think of the “Sex at 31” series I keep picking at, again and again). But on the surface, what, exactly, is wrong with the occasion? I wrote out such on my birthday years ago, since fallen into a poetry manuscript that might never see the light of day, a poem influenced by reading American poet Robert Creeley. I’ve got both a “sex at thirty-eight” and a birthday poem for the same in wild horses (2010) and now this, the chapbook some forty, published for my fortieth birthday party in Ottawa. What once an annual attempt at writing out a form of reconciliation on being adopted, my annual birthday poem, turning a loss into an exploration into curiosity, and now this annual pause, just to see where I am.

some forty: an almost

of numbers, age; what does all

happens & then something else; not

all needs record, sure;

born & lived & did some things

A birthday: as arbitrary a moment to pause as any other, but through the pauses we are reminded how we live, and even that we do, apart from rushing headlong towards oblivion. Who was it that said the unacknowledged life ain’t worth living? And then there was Creeley himself and his poem “A Birthday” from Words (1967), published when he was forty-one, that includes:

a moment of stasis

but what I know

is water, as you

are water, as you

Clearly the Ides of March is not something to beware. Nothing but onward from here, rob, you 1970 vintage, you.

I can't even rember turning forty...mind you, I couls also want to forget. Many more to you! Wm.

Yer still a kid, Kid
But you ain't Billy
Who done what he did
And for that I say YaY
And forty ain't old
But it ain't young either
You grow up or out or under
But never in red weather :)

I used to think I'd be burned out by the time I hit 30, too. I think the exactly line was "By the time I turn 30 I'll have the most interesting face in the world."

I got kicked out of a liquor store in Vancouver on my 30th birthday because they decided that my ID was fake.