12 or 20 questions: with Jeff Latosik 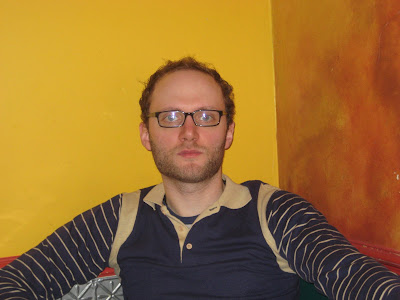 Jeff Latosik's first book, Tiny, Frantic Stronger, will be published this Spring. His work has appeared in magazines and journals across the country. In 2009, he was a finalist for the Bronwen Wallace award.

My first book hasn't been published yet (it'll be here in April). But, interpreting this question broadly, writing the book made me see other avenues I could go down -- other possible books. Which, I suppose, helped me poke my head up and think about how I might sustain this writing thing. It wasn't until I got the book rolling that that started happening.

I found the smallness of poetry compelling. When I would read a great poem, I would think that this little thing had no business being as big, as expansive, as it was. I liked the way a poem defied common sense. Most of what I encountered in other areas of my life seemed to argue the opposite: more is better, keep acquiring, building, advancing. There's this kind of slate-cleaning appeal to poetry. Only use what's necessary.

When I start out with an idea for a poem, I might intuitively feel how the poem is going to go. Like when you're planning an itinerary for a vacation, and -- looking through the soft sell literature from the travel agent -- a series of destinations seems to logically fall in place. This is the first draft: the itinerary.

However, this is never the interesting poem. For that, I try to live somehow in the intuited, easier poem and then deviate from that. I write it again. I try to end up somewhere else. It's not that I'm trying to be difficult. Without some kind of swerving, it isn't alive.

For me, poems begin with single lines. Anchors. Other lines show up around that. I tend towards thinking in shorter pieces. Each poem is its own problem. It needs to have space to go wherever it might want to. I need to have that freedom. So I don't work with a larger book in mind.

Readings are part of my creative process. I hadn't realized that. I'll change things after I read a poem out loud, or sometimes I'll rewrite things completely. That happened once -- dramatically. I had a poem that had stayed one way for two years. Then, right after the first time I read it, I completely rewrote it. I remember thinking that my reading it confirmed what I had always thought but was unable to admit. Reading it out loud in a room full of people is like some kind of stress test for the engine of the poem. So I like readings.

I don’t have theoretical concerns. I mean, there are things I think about from time to time. But none of that stuff is generative for my work.

The question I asked most in Tiny, Frantic, Stronger was just “what makes a weak poem and what makes a strong poem?” It was shrewdly at the level of craft. There were ways that this question started to spill into the content of my book, though only so much. I started noticing, after a while, that a lot of things were giving out in my poems -- floors, beams, brakes, joists. I needed things to give out, or there was no movement. There needed to be weak spots.

One of the current questions is just this: what is poetry's place in a place where things are pretty okay? I mean, we have problems, sure. Wait, are things pretty okay?

The writer has a role. You get a lot of shitty answers and explanations. Sometimes, you get no explanations. A writer will deal with this problem but not from the point of view of fixing it. A writer, even at his or her most challenging and subversive, is there to make life better, to help us feel and experience more.

It's important to have somebody who believes in your work; somebody who will see your project through to the end, even when you’re ready to quit this writing thing and join the carnival. Those feelings of veering away from your work, of being hard on it, can be managed by a skilled editor.

Don't try to be "good." Let your work come from what you care and are excited about. Don't worry about "good."

Try for something new in the morning; edit in the afternoon. Take a day off here and there. I like to get out of the house in the morning. Actually, I write mostly away from my room. I like writing on the bus. My room is for editing.

It’s important to take breaks. Professional athletes stagger their training. Off-season is important. Stalling is part of the process. I suppose you can return to other work at that moment, or just go for a walk. Everything you could ever want to write about is happening within a few kilometres.

Popular music. It's a huge category, I know, and I could break it down further, but there's a good inclusive sense in the generality here that I like.

It's possible to get poetry ideas from songs, and vice versa, but there are important differences between song lyrics and poems. I wasn't inspired by lyrics exactly. What I mean is the sense of enjoyability. Music reminds me that enjoyment is a virtue. It tends to be downplayed. Which isn't to say that I try to write enjoyable poems -- I just try to keep an eye out for when I'm being boring. I value those works that feel incredibly light in my hands. I try to learn from them.

The non-fiction writing of Woody Allen and David Foster Wallace is a big deal for me.

Really, though, every reason I’d ever want to write poetry is in the book North and South by Elizabeth Bishop.

I’d like to learn the drums. That's actually the first thing I ever wanted to do, before I even knew that you played drums in a band. I thought you just played them in the store. We're talking very young. Like 18.

I'd like to design books. I know, I know -- I'm a publisher's dream. "So I have these ideas for my design." No, seriously I don't do that. Maybe. My publisher is Insomniac and working with everyone there was a great experience.

I don't know. I honestly don't know why I write. It would be easier not to.

19 What are you currently working on?

Taking a break from poetry. Writing songs. My plan is to record an EP in the Spring. I'll maybe circulate it.

Posted by rob mclennan at 9:00 AM
Labels: 12 or 20 questions, Insomniac Press, Jeff Latosik