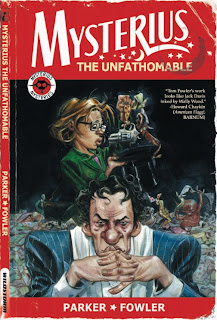 This interview was conducted over email from February to March, 2010

Tom Fowler has worked in gaming, concept design, advertising, and for almost every major north american comics publisher drawing a wide variety of books including: Star Wars: Jango Fett, Batman: Legends of the Dark Knight, Revolution on the Planet of the Apes, and the critically acclaimed creator owned series Mysterius: the Unfathomable with Jeff Parker for Wildstorm. Tom is currently drawing the comic strip “Monroe” for MAD Magazine, which chronicles the exceptionally horrible life of it's teenaged protagonist, as well as his contribution to the anticipated Prince of Persia GN for Disney Press.

rob mclennan: I guess the first question is pretty obvious: how did Mysterious first come about? And, given that it originally appeared as a six-issue monthly, are there any plans for a second, or even ongoing, series?

Tom Fowler: on December 6, 2007 6:02:19 PM EST I received a very nice email from mark paniccia at marvel letting me know that the job he'd wanted me to do with jeff parker had fallen through but hopefully we'd get a chance to do something else in the future. At 6:03:35 PM EST I got an email from ben abernathy at wildstorm wondering what I had cooking schedule-wise and whether i'd like to do a creator owned book with jeff parker. The next day jeff introduced me to MYSTERIUS.

MYSTERIUS was originally jeff's tribute to 1920's stage magic, dr. who, and douglas adams' dirk gently novels (the first of which I was reading at the time). I saw the who and the gently and raised him some hammer horror, wes anderson, and EC comics. Over christmas we just started churning it out in a flurry of emails and the universe of MYSTERIUS started to come into shape. Much of which (nudism, sprawling magical/living estate, famous ghosts, ponce de leone, leprechaun evisceration, and a punk troll named kevin) never made it into the initial series.

As for whether we do more, that's up to the audience. We were VERY well received critically, but the sales on the periodical series weren't so hot. A LOT of people seemed to be waiting for the trade. If the collected edition does well we have a pretty decent shot at another book.

rm: You once referred to Mysterious as a “fat Doctor Who.” How difficult is it for you to develop characters? Does it all come from the writer, or was it more of a collaborative process between the two of you?

TF: we came up with a bunch of clever elevator pitches and tag lines like HOUSE but with magic, DR. WHO but with magic, (or my personal favourite) Wes Anderson's CONSTANTINE. As much to amuse ourselves as to try and synthesize some kind of explanation of what we were working for the people who were paying us to do it. Not that it mattered, our editor ben was along for the ride and seemed to be having loads of fun watching yell things like “bigger nose!” at each other. As i'd mentioned above the initial idea was jeff's, but became OURS pretty quickly. We were given the time and freedom to build a world from the ground up. Jeff would start with a character idea, i'd flesh it out on paper, then he'd add an affectation or two then I would, then i'd subtract them all and say: “when he's at home he's a nudist” and that would play to the character, and so on. We built all the characters, how they looked and acted and the stories and back stories that way.

Part of the beauty of our relationship is that jeff is both a writer and an artist and he, likewise, understands that i'm an artist who can write. We both respect that in each other, so when i'd get stuck with how a room or a particular piece of decoration or a character (delfi!) should look jeff could doodle it out for me, and occasionally if I saw a scene or a piece of dialogue going a certain way I could suggest an alternative. It's never a question of banging your fists on the table and screaming “MY WAY!”. You have arguments now and again, but if everyone brings their opinions to bear, respects everyone else's, and, most importantly, explains/listens to the arguments for those opinions the best idea ALWAYS floats to the top. And then everyone's happy.

rm: You’ve always had a fondness for drawing characters with curves, particularly women. How does this play out when you’re working with some of the larger, more mainstream, companies, such as Marvel or DC? 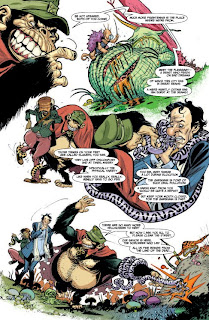 TF: well as I alluded to ben and wildstorm more or less gave us carte blanche to do it the way we wanted to. We felt it should have a different kind of life, and they agreed. It's not really something i'd do if I were working on the x-men or something, unless I was asked to. When MYSTERIUS came through i'd been out of comics for a year or two, working mostly in design and advertising and for MAD magazine. So when I came back I just did as felt most natural; kind of a euro-EC hybrid look.

rm: I remember when you drew that issue of Batman, complaining that they wanted you to bulk up the character and, as you said, missing the point of Bruce Wayne being a “regular guy.” How important are these concerns, to draw a character properly, even if it might not jive with those you’re working with, or for?

TF: well, in that particular case they were right. I think i'd wanted to give batman an athlete or swimmer's body, but it just didn't look right at least as I was drawing it. Certain characters, particularly super heroes, are best served by being drawn as iconically as you can make them. Also, frankly, batman isn't mine. They know how they want him, and so long as they communicate that to me it's my job to give them what they want. MYSTERIUS on the other hand IS mine, and I draw him the way that I think he works best. I get the final word on him and everyone else in his universe for better or worse.

rm: You’ve worked for a number of companies over the years, including Dark Horse (the Janga Fett one-shot), MAD and DC Comics (including a run on Green Arrow), among others. How does the experience with Wildstorm compare?

TF: I don't want to sell anyone short because I've had very good experiences most places i've worked, but my dealings with both MAD magazine and wildstorm have been the best and most professionally rewarding of my career. There have been bumps, but i've nothing but glowing things to say about both companies and people i've worked with at them. 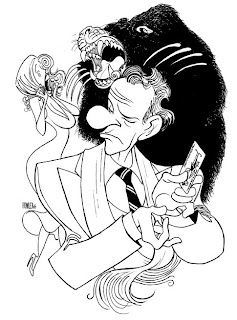 rm: I know you’ve talked for a few years of attempting to develop some of your character and story ideas into feature-length film projects as opposed to more traditional comic venues. With more television and film projects coming from comics these days (the new Human Target series comes to mind, or the Iron Man 2 and Captain America: First Avenger films working their way into an Avengers franchise), do you worry about comics looking at film first and book second, if at all? How is film and television changing the face of comics?

TF: I think what's it's doing (provided you have a good

agent) is giving creators and opportunity to go out on their own and actually be compensated for it. Selling the option on a book can amount to roughly what you'd get paid if you signed away the rights to whatever project, and if it actually hits then it's just that much more in your pocket. If the property gets optioned you can use that to create buzz and sell more books. If the option get picked up you can use THAT to sell more books. If the movie gets made, regardless if it's good or bad YOU CAN SELL MORE BOOKS! And if hollywood completely screws it up at least the original book, the story YOU wrote is out there; complete, unabridged, and unassailed.

I'm sure there are down sides, but that's the job and I have muths to feed and a mortgage to pay.

rm: Who are some of your influences, whether as artist or writer? 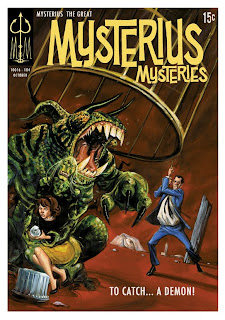 TF: i'd be remiss if I didn't say first and foremost; douglas adams. In many ways MYSTERIUS was our love note to him.

As far as artistically, that's a very long list. I'd like to think that as an artist you learn from every other artist you look at, whether you like their work particularly or not. Specifically my two favourites are: Albert Uderzo, artist and co-creator of Asterix, and Jack Davis, cartoonist and illustrator for EC comics, Mad Magazine, Creepy, Playboy, Trump, Humbug, various movie posters, ad campaigns, books, magazines... you name it, he drew it. I think both of their influence is very apparent in almost all of my work especially the comic book work. But the list (which is in no way complete or in any kind of order) also includes Peter de Seve, Adam Rex, Mercer Mayer, Tony Diterlizzi, Al Parker, Norman Rockwell, Will Elder, Wallace Wood, John Buscema, Tom Palmer, Edward Gorey, Charles Addams, Sempe... the classic Playboy cartoonists like: Erich Sokol, Jack Cole, Edlon Dedini... british cartoonists like: Thelwell, Harry Hargreaves, Ronald Searle... and the countless, nameless (to me at least) designers of animated movies and posters and paperback novels. Right now, hanging on the wall of my studio, is an old 60's broadsheet movie poster for Disney's The Computer Wore Tennis Shoes. I have no clue who painted it but it remains, in my opinion, one of the most beautifully executed gouache paintings I have ever seen.

Tom Fowler signs copies of Mysterious at Ottawa's Silver Snail on Wednesday, March 17th from 11am to 5pm;

Posted by rob mclennan at 9:09 AM
Labels: interviews, Tom Fowler