There it was, in the palm of his hand, a little world complete unto itself. 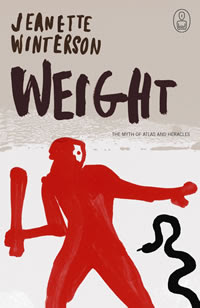 (2005), published as part of the myths series of books (themyths.ca) that include titles by Margaret Atwood [see my review of such here] and Ali Smith as well as others I haven’t seen yet, by Chinua Achebe, Karen Armstrong, A.S. Byatt, David Grossman, Alexander McCall Smith and Su Tong. Third in this series I’ve seen, each book I’ve read manage not only variations, and even new takes, on stories we are already familiar with, but a shortness, a packed lyric that seems so rare in writing, and even rarer, still, the more often I see it. It makes me wonder about other writers; does one need to overwrite to simply write, to simply speak? Great stories, I’ve heard, manage to stand that test of time, no matter what might come of them; who was it who wrote that even Hamlet, rewritten and performed with an all-monkey cast would still hold up as strong (that I’d like to see)?

Winterson’s Weight tells the story, the myths, of Atlas, who held up the world, at Hercules, who famously laboured, holding the interplay between the two. Where they met, just outside, beside and even underneath, as it was, the world. How does one man take on such a task, and how does another refuse?

But now, Atlas was in his own element and he couldn’t manage to pick up an apple. With huge difficulty he rolled it towards him, and lay looking at it, beside his head.

His forced exile had taught him to concentrate. He used to go about the world as busy as a man could be, organizing, building, farming, making his wine, selling it, supplying jewels to the wealthy, talking with the powerful. He had been one of the powerful.

A powerful man doesn’t notice much. He doesn’t need to. Other people notice things for him.

I’ve always been an admirer of Winterson’s writing (there’s very little of hers I haven’t yet read); always admired the brevity and lyric abstract flow of her breathtaking prose. How does she accomplish so much in so small a space? And would this novel ever even see print if she were a Canadian (I would hardly think so)? Such questions, sure.

It was a charming read but she can be a bit twisty, you know?