that i dare near him to speak volubly

now a tertiary nearness i must leave

envy oh those near leaving

me now near the vanishing

(as if never near a smaller thing)

little by little if i interject

(and know that i am nearly)

know well, when i flee nearby

if nearness that soft button feels

i will nearly return

When I went through her first poetry collection, Ropewalk (Snare, 2006) [see my review of such here], most of what I was excited about Angela Carr’s writing was in seeing exactly where it might go next, and what came next is The Rose Concordance (Toronto ON: BookThug, 2009). The first thing about her book of harmony, her book of lists, her concordance, is just how slippery it seems, how hard it the collection is as a unit to get a handle on, making that by itself its handle, a book of mercurial shifts. As she writes near the end of her collection to open her “APPENDIX A: GLOSS”:

This book was conceived of as an allegorical mall with a central fountain and concordance corridors leading away from it in several directions. Amid mass-produced goods and consumers, perched on the grim of the central fountain, sits the poet, otherwise known as Poverty, dipping her hand into the water to retrieve coins. Over the loudspeakers play the voices of a slowed-tempo chorus of literary critics. The entire scene is in black and white except for the green basin of the fountain and the green money exchanging hands across counters. The sculptural feature of the fountain is a gorgeous representation of Narcissis, whose face is turned down toward the water. Directly above the fountain, there is a round opening in the ceiling with the inscription “Our Pink Heaven” in a ring around its edge. The sky above is grey. (Note the mall must be closed when the sky is blue and when it is raining).

These poems move almost amorphously, wandering descriptions that take the form of water, pushing when needed, and slipping away just as easily, in poems such as “of the middle,” “of nearness,” “of alarm and fountains” and “of love,” where she begins, “I mistook love for an ending. / An ending love for a mistake. // There is no love without mistakes. // I mistook a tree for love. An ending. // You wrapped us up in love and mistakes.”

between water and bone

drawn restless I am abyss

Carr explores the meanings and lists of tangible and intangible things, rendering concept into object and vice versa, blending the two; the lyric takes on the properties of the hard sentence, which takes on the properties of light, and of mist, covering all else with its soft impossibility. How is it Carr writes out such wonderful impossibilities? 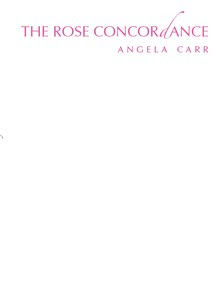 I bled language until I had no body.

Bled between turnips and snow

Our story was less

Language had bled from me

So our story was less. (“of the middle”)