It is a commonly held belief that an innocent country boy or girl, upon moving to the city, will be exposed to temptations great in number and strong in attraction, that his or her innocence will be attacked, and in most cases, at least bruised, if not entirely battered. He or she may be debauched or hardened or criminalized or even robbed of life. Less has been said about the youth who moves from the iniquitous city to a bucolic setting. Even Émile Zola, our great founder of experimental fiction, never investigated such an eventuality.

I am a city dweller who spent his boyhood in the orchard country of south-central British Columbia. Though I have often heard people point out that I retain some of my early innocence, I also know something of the darker corners in metropolitan life, far from my mother’s eye. My best friend moved from the city to my village when we were about ten, so I did not look to him for my information, although a psychologist might. (“An Experimental Story”) 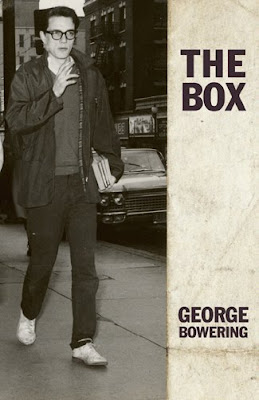 With the spotlight on Vancouver lately, through all that Olympics, there is also George Bowering’s short story collection, The Box (Vancouver BC: New Star Books, 2009). The Vancouver author of some dozens of books of poetry, novels, memoirs, essays, short stories, histories and plays, Bowering’s The Box focuses on those younger years, in and around the Vancouver of the early 1960s.

Bowering’s first forays into fiction included that fictionalized version of himself, the character Delsing, that we remember so well from his first novel Mirror on the Floor (1967) and his first collection Flycatcher and other stories (1974), and this new collection of stories (his first since the appearance of his selected stories, Standing on Richards, appeared in 2004) stretches through the bars and urban spaces and fruit orchards and rural spaces in and around Vancouver of the early 1960s. One of the strengths of Bowering’s prose over the years has always been through the use of voice, and this collection of stories exists in such a surety of voice that it’s sometimes hard to see these stories outside of Bowering’s own voice, despite the changes in detail from his own experiences. This is a period of Vancouver that Bowering knows first-hand, but what are these stories telling us? Are they fable, fiction, drama or memoir or all the above? In ten stories, this collection wanders and weaves, but never loses track of itself, always managing to keep to the thread of what the story is made for, how the story gets told, and all with a fine pace, the story walking casually along Georgia Street, perhaps going down to the Hotel Vancouver. But with his recent reissues of Burning Water and Shoot! by this same publisher, one wonders, will Bowering ever return to novels?

No, wait a minute, that hitchhiking took place in 1954, just before I joined the air force. In 1958 I was working in the forestry around Merritt. I might have gone into Kamloops then, or maybe I bought that book for ten cents at some church sale in Merritt, though as I remember, I was in pubs a lot more than I was in churches, if indeed I was even in a church. I do reemmber two books I read in a tent beside a lake in the mountains not far from Merritt. The other two people in my crew were out on the lake fishing, while I was reading. One of the books was Turvey by Earle Birney, and the other was The Secret Agent by Joseph Conrad. So who knows? Maybe I was on a Conrad kick then. (“The Box”)