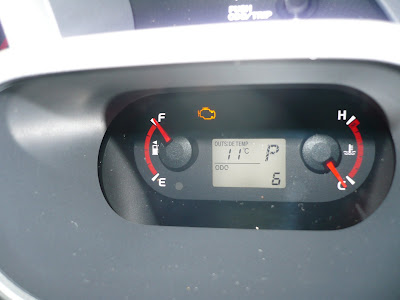 [Lainna gets a new car; with only 6km on it & a full tank of gas...] How long has it been since I’ve done one of these? Too long, perhaps; you already know I’ve got a new trade poetry collection out, you already know I’ve got a new little chapbook out with a press out in British Columbia, you already know about my ongoing pieces up in Open Book Toronto and the 2010 above/ground press chapbook subscriptions. Did you know about the anthology that Stephen Brockwell and Stuart Ross have been putting together, thoroughly yet quickly, to be launched at the end of the month on Parliament Hill to protest Prime Minister Harper’s second (so far) prorogueing of Parliament?

Still; where have all the little chapbook presses gone? I’m hoping new things come out soon from some of those I keep my eye on, rumours of forthcoming things from Rubicon Press, The Emergency Response Unit, AngelHousePress, Apt.9 Press and a few others; but what of Trisia Eddy’s Red Nettle Press, what of Jack Pine Press, Nomados Press; what of The Onion Union and NO Press? What of all the others I can’t even recall right now? I’ve run low of little things to lovingly discuss. Otherwise, check out this interview with first-book author Soraya Peerbaye (she took the first workshop I ran at Collected Works Bookstore, moons back).

There are a couple of new reviews of Chaudiere Books titles, including this one Rebecca Rosenblum did of Michael Bryson’s The Lizard, and this one we reprinted on the blog by Ashly Dyck of Marcus McCann’s Soft where; also, Swedish poet and translator Lars Palm (he translated some of my poems into Swedish a few years back) has been noticing me lately on his blog, both as notice and poem. Watch for new Chaudiere titles this year by Andrew Suknaski and Pearl Pirie, as well as new above/ground press publications over the next couple of months by Ken Norris, Cameron Anstee, Aaron Tucker and Natalie Zina Walschots, as well as the fourteenth issue of The Peter F. Yacht Club; have you subscribed or resubscribed yet?

Saint Paul MN: It’s been a while since I referenced unarmed journal (did you ever see the issue jwcurry and I guest edited a few years ago?) but the publisher sent a little packet some time ago with issue #61 and subsequent chapbook published alongside, Vancouver writer George Bowering’s a little black strap (2009). Part of what I’ve always admired about Bowering’s decades of publishing (his first book appeared in the very early 1960s) has been his, despite publishing with large houses, ongoing and continued engagement with the small and micro presses and literary presses. Recently, he even worked to produce a chapbook a month throughout 2006, eventually publishing the results through BookThug, No Press, Laurel Reed Books, Pooka Press, Rubicon Press, Gorse Press, Nomados, above/ground press and CUE Books (as well as a couple of other presses). What makes this engagement real is how his work manages to keep a dialogue going through such enterprises, furthering his own writing as well as furthering the possibilities of who can see such (subsequently, Robert Kroetsch’s new poetry title doesn’t seem to have a single publishing acknowledgment, which seems odd).

You Can be Poisoned

You can be poisoned by ground beef,

even while remembering the lovely cheeseburger

you had at the party in David’s back yard, e-

coli because there was a hurry at the barbecue,

or the clubhouse hawaiian burger at the south slope

golf course, where the grass is greener than

the illustration on the egg cartons, greener

because there are finely mixed chemicals

slipping down between the grass roots,

lunches for little kids next door affected by science.

You can be poisoned by ground water.

a little black strap is a collection of what appears on the surface to be “misfit” poems, going against his usual construction of publishing single units or collections of units, writing the series, the sequence, the connected and/or long poem. Is this, after some fifty years of publishing, Bowering watching his own writing book/chapbook constructions shift, or is this simply a mash of other projects for the sake of a smaller, disconnected unit? Either way, I am enjoying the difference.

we learned that looking goofy

is a way to be hip as you’ll ever be.

We knew the Globetrotters could have

wasn’t about to fetch it, he told us

baseball turned him from a second class

citizen into a second class immortal.

Too bad baseball got played in the U.S.,

where Ty Cobb was afraid of Darkies, where

the year you’re called a man?

Northampton MA: I like these graceful little publications, Invisible Ear, edited by Seth Landman, with issues #3 (February 2009) and #4 (July 2009); does that mean there might already be a fifth by now? Each issue features a short list of poets, each with their own small sections of poems. Unfortunately these don’t include author biographies (perhaps this, apart from the production, is what adds to the graceful mystique of the chapbook-sized journal).

Say the night defeats the orange

triangle that rises and rises,

and that orange is all you say

and want to say but don’t,

this Denmark would be different

in two ways: morning would

on the hearty look of boys

and girls who think staying

As Landman writes at the end of his small introduction to issue #3:

The space I take up is a small enclosure, and within in, things are happening all the time. The poets and poems you will read in this third issue of Invisible Ear have stepped into my enclosure, and I can feel homesick for the spaces they take up themselves.

To mention highlights, in a particular way, is to mention the whole of each issue, as the highlights abound, but the third included Edward Mullany and Lesley Yalen, and fourth, pieces by Eric Baus and Luke Bloomfield. For further information, check out the links at invisibleear.wordpress.com or email the editor/publisher at seth.landman@gmail.com

STAPLED TO THE BACK

We pulled back and realized the sun had risen

and people were boarding a train to Tuscaloosa

We know someone who had an orgasm

on a parking meter in the most hum-dee-dum way

We have fallen for people and things are trivially

as you would write your name on a chalkboard

a meter maid is also looking for love (Luke Bloomfield)