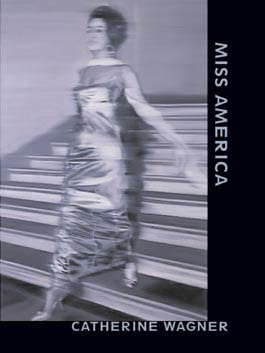 It’s only been a few weeks since my review of American poet Catherine Wagner’s most recent poetry collection, My New Job (Albany NY: Fence Books, 2009), appeared; but what was she doing before she acquired employment? Since we connected, I was able to trade two of mine for the first two of hers, and her Miss America (2001) and Macular Hole (2001) quickly appeared at my front door. What I find fascinating about these books, read as a whole, is in part through just how spread out around a subject Wagner can actually write, pushing as far and further around, making the reader have to almost decode where the poems are going, or coming from.

Without (honestly) knowing a thing about the author, the books read, in order, as a woman newly married, a woman pregnant and third, a woman returning to the world, through employment and fitness. Aren’t Wagner’s concerns fairly common, almost (in a western context) fairly universal? But what becomes so spectacular is how she writes her poems, her leaps and jaunts, strange juxtupositions and wonderful, filthy mouth.

A Poem for Marketplace

I can’t see the cars

Human riding on the sound

All press forward with a mute over their strings

For a moment there were no cars

God I love that noise

A person strapped in warm and going

They are all going to work

I think it is nice that they all go

In her first collection, Miss America, Wagner writes sections riffing Jack Spicer’s Book of Magazine Verse, yet it’s unclear if these were written with Spicer’s (supposedly) true intent—poems for journals that unfortunately, for the most part, turned them down (Poetry did but Tish didn’t, or the Vancouver Conference)—or if they’re written ironically, which takes (I must admit) some of their power out of them, such as her “A Poem for Guideposts,” “A Poem for Nature,” “A Poem for Good Housekeeping” and “A Poem for Poetry.” I appreciate what she’s doing, if this is what is happening, but it can appear on the surface to be a kind of throwaway cleverness, apart from the kind of ego-driven desperation that Spicer might have engaged. If she didn’t actually send her poem to Good Housekeeping, then what’s the actual point?

I am so afraid

Still, Wagner doesn’t so much twist or turn expectation as throw the whole of it out the damned window, doing something else entirely, perhaps making the point irrelevant. And making this a magnificent book, whether first or otherwise. I revel in her twists.

Allied with it were all receptacles

A mailbox doesn’t change what it takes in.

The mail arrives if crumpled in integral state.

I wrap what I take in

and ject it out objectified.

This pleasure is a mighty wine

to turn the outward in, unfurl it

realigned until the corners match

my corners, I do so without thinking

in my thinking. Who is alert enough

to watch the corner while it vamps and shudders

repositioning the being hall as bright and deep

The food inside my breast

In her second collection, Macul

ar Hole, the book exists, unlike the first, as a whole; not sectioned, the poems twist and turn their magnificent way through what appears to be a pregnant and new-mother narrator, writing (as the last two lines of the collection): “The boat was called Induce. It made some people / up and down, up and down, and a hole in the water.” Not as strong, somehow, as her first or third collections, but worthy for her name, alone. The poems, from beginning to end, move as a kind of accumulation, a building sweep that by the end simply takes, and takes over. This is a worthy collection, if by a poet capable of better. This we already know.

Please god love me and buy me

Read this hillock and ride me

Wraith typing all day for money.

God bought me today for two silver fish in a can

God bought me tomorrow for bland in a pan

and a card an email from Rebecca

Bought four hours of my control alt delete shut down

Bought a new day-section with a headstand

My commerce in shall

God performed me today for a half minute

in locker room hiding my boobs from the kids

and my hair is silky and my mane shot silk gold

Bought a book on economy

I bought my debt today

Debt off my God today

God off my debt in a macular hold

I dream of an end like a fount to this night

I bought my ghost I walk my ghost (Macular Hole)