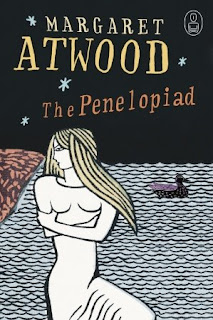 I’ve been wanting to read this for a while, ever since finding out about her participation in various writers from around the world rewriting a series of myths (but this the only one I’ve read so far), especially since my own first (published) novel, white, does a version of the same (I won’t tell you how). I’ve always preferred her shorter prose works to those of her longer books, from the magnificent short novel Surfacing (1972) to Murder in the Dark (1983) to Good Bones (1992). The Penelopiad (rewriting the myth of Penelope and Odysseus from Penelope’s point-of-view, in case you’d missed it) is vintage Atwood, from the clever reworking of an old and overworked story, to the snide remarks and dry, cutting humour, and the sheer intelligence of the writing.

The problem, if one can call it that, is the sheer amount of one-liners that managed to work their way into my notebook, from “To have a child was to set loose a force in the world.” or “It’s always an advantage to have something to do with your hands.” or “Dripping water wears away a stone.” or this little passage:

But perhaps that is too crude a simile for you. Let me add that meat was highly valued among us – the aristocracy ate lots of it, meat, meat, meat, and all they ever did was roast it: ours was not an age of haute cuisine. Oh, I forgot: there was also bread, flatbread that is, bread, bread, bread, and wine, wine, wine. We did have the odd fruit or vegetable, but you’ve probably never heard of these because no one put them into the songs much.

I admire anyone willing to go into such a familiar text willing to work through the holes and, through doing, subverting the text as a whole, something that takes a whole lot of knowledge of the original text, and a great deal of skill (much like Tom Stoppard did in his magnificent play Rosencrantz and Guildenstern Are Dead out of Shakespeare’s Hamlet, first performed in London in 1966, and later turned into a film in 1990). I like any book, too, where you can tell just how much fun the author is having through the whole process. This is a book I’d recommend (and already have been).
Posted by rob mclennan at 7:05 PM
Labels: Margaret Atwood, McClelland and Stewart