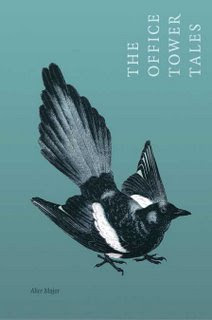 With her newest poetry collection, The Office Tower Tales (Edmonton AB: University of Alberta Press, 2008), Edmonton poet Alice Major [see her 12 or 20 questions here] has written her own office tower/downtown Edmonton version of The Canterbury Tales (for those who missed the obvious). Writing a very narrative verse, she writes out seventeen “stories,” all of which have “prologues” and four that even have “epilogues,” as well as an “epilogue” to the collection as a whole, with titles such as “Prologue to the Waitress’ Tale,” “This Great and Complicated Sin,” “The Office Romeo’s Tale” and “The Tale of the CEO’s Daughter.” This large kind of conceptual project (the book sits at 252 pages and rather small print) is unusual and unusually ambitious for Alice Major, who has produced eight previous collections (as well as a YA novel) over the years, predominantly as collections of individual poems or sequences. This new book, The Office Tower Tales, is very much a single project, considered a long poem in the very best kind of way.

Office towers, visible from far
across the prairie in the lengthening days,
are rolling up the lengths of rubber rug
that guard the marble of their foyers
from winter slush.

And down the long glass atrium of Commerce
Place, sun streams on the heads
of office workers – reds and ebonies,
flax, ash and tan. All the flocked shades
of continents

around the globe – a trail of migrant birds
gone native here and bound for coffee break
in the kiosk-bordered market of the food court.
There, in its central parliament, they take
their tables, near

the one at which Pandora, Aphrodite
and Sheherazad are overheard
continuing their long debate. Pandora
stops chewing at her thumbnail with its scarred
and bleeding rim

to snap, A kinder, gentler patriarchy?
Don’t make me laugh. For emphasis, she raps
the cardboard corner of her empty
cigarette pack on the table, takes a drag
of bitter coffee.

What makes this collection is the sheer focus of the project, the quality of the writing in a poetry book nearly novelistic in its approach, taking in her years of living and working in the downtown core of the city. Still, as much as the book holds together as a full unit, some of the individual pieces are better than others, with “The Tale of the CEO’s Daughter,” for example, falling a bit away from the strength of some of the other pieces. Still, a highly ambitious and fully-formed work, this is certainly a break from what Major has done previously.