ABUNDANCE: The Mackie House Conversations about the Writing Life by Robert Kroetsch and John Lent 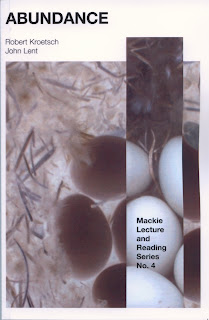 This conversation between Robert Kroetsch and John Lent is guided by love – of the word, of stories, of reading, of teaching. And of the work of writing, which seems, to a young writer, to come naturally and easily to all who have gone before you. You feel as if everyone is sure of themselves but you.
-- Sean Johnston, “Introduction: ‘The traces could count…’”

As part of a month-long writers residency set up through Okanagan College in Vernon, British Columbia, the relatively-recently-revived Kalamalka Press (the same press who published Karen Connelly’s first poetry book, oh so long ago) produces a book after the fact, as part of that residency. The fourth in the series, the only one I’ve seen previously is the poetry collection by Dennis Cooley, Country Music: New Poems (2005) [see my review of such here]. Published as part of writer Robert Kroetsch’s residency, he and author/prof. John Lent had a conversation about writing that lasted days, edited and transcribed into a single volume. Abundance (Vernon BC: Kalamalka Press, 2007) reads very much as a conversation between two old friends talking about writing generally and fiction specifically in a casual, thoughtful way. In places they even return to the teacher/student or mentor/student relationships of previous years (Lent usually moving in this direction, there and here); it wouldn’t be a difficult thing to do, given Kroetsch’s years as an extremely generous and attentive teacher and mentor to so many writers over the years and years and years.

R: You’ve raised some interesting questions. First of all, writing is sound written down, and you want to recover that sound for the reader. That’s not easy to do, because the notion of accent and so on comes into play, and then there’s the question of audience, and the audience wants to hear accurately. The acoustics of the narrative have to work for the listeners and you were saying as a musician you check the acoustics of the building when you’re going to play, and maybe we have to check the acoustics when we’re going to write a novel or a poem or a short story. Where are we writing? Who are we writing for?

It’s interesting just how far-ranging Kroetsch’s influence has spread, moving across generations and across geographies, spreading through writers in various parts of the country for some four decades, and continuing, moving even into younger writers such as Jon Paul Fiorentino and Amanda Earl, for example. Introduced by former Ottawa resident and author Sean Johnston [see his 12 or 20 questions here], it must be said that such a piece is worth the price of the book alone (especially considering this fine piece is a mere ten dollars).

You begin your life as a writer alone. This aloneness is sometimes heartening, often frightening. Then you begin to realize you’re not alone, and this is by turns annoying and encouraging. You become overwhelmed by all the voices around you, angry at their insistence when you have so much writing to do and for writing you have to be alone, as you began. Then you are encouraged, because these voices have said these things for you and you don’t have to worry about saying them yourself. Then you’re scared again, because everything has been said. You feel alone again, because you are the one who has to come up with something new to say, because the voices have not said anything the way you would say it, or could say it.

And this is the life a writer lives every day, with the blank page, fighting voices and being soothed by them. Even if the voice they are at war with is the voice of themselves the day before. That’s the reason for Kroetsch’s ‘escape’ to the north, that’s the reason for his writing in the margins. Necessary, of course. And now you begin, yourself, and you begin in the margins of the literature of Kroetsch’s generation, to Lent’s, to your own and so on.
-- Sean Johnston, “Introduction: ‘The traces could count…’”

One thing that I do wonder, why didn’t the book actually acknowledge which days the five interviews took place? Labelled as “Day One,” “Day Two,” etcetera, does it matter which days were which, or if they happened consecutively or with a week or more in between? Was it as simple as a work-week’s worth of interview? And how does this conversation hold up beside that other publication from the 1980s (I can’t find a single reference to it online...), critical interviews with Kroetsch published by NeWest/Longspoon? And when will we see more Robert Kroetsch poems, a fiction? Where has the story gone?

J: I’ve thought about that a lot…because I think we’ve been moving towards a new story…or making new stories…in this last century…and they’re a different kind of story…I don’t know…maybe I’m just hallucinating…and romantically want a new story…I’m seeing evidence of it…certainly, when I read your work, I sense a new story…like a new design…and it’s a very comforting design...because at this point in this new century, when there’s such a terrible push back, politically, to some kind of, almost very rigid design, such extremes of nationalism and violence and certain male behaviour…I have this horrific sense that people would love to return to a simpler time when things were really clear-cut, and I don’t think I want to go back to that world because I think it was terrifying…so, in a sense, what is the antidote…and I think it’s imagining life, almost a hybrid kind of life, that’s different, that has a different sense of the family, of sexuality, of beauty, of love, of all those things…so you wonder, are these new stories…are they preliminary designs…some kind of indication?...I guess I’ve always felt that the stories do capture things, do mirror things…oh!...what am I trying to say?