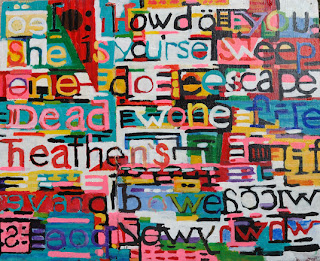 Here’s a painting by my friend David Cation (his work also graces my poetry collection aubade), as he calls it, the “hotel montreal piece.”

Waterloo ON: Now that I’ve finally found a good magazine store in Edmonton (on Jasper, near 104), I just picked up the new issue of The New Quarterly [see my note on the previous issue here], I’m very much liking this new format, far more than the previous. It makes the content look far less scrunched-up inside the issue, giving it all room to b r e a t h e. The new issue has a pretty interesting interview with and non-fiction piece by Toronto poet Souvankham Thammavongsa [see her 12 or 20 here; see her interview in Poetics.ca; see my review of her chapbook and second book], taking about her magnificently-enviable boiled-down poetic, and writing her poetry collection Found out of her father’s journals. Her comments on her own work, and her own choices, are utterly charming and extremely interesting, especially compared to other works out of various other versions of “family document,” more interested in writing her relationship to the journal than out of the journal itself.

Everything in his scrapbook is written in Laotian. I don’t know how to read or write Laotian but I do know how to speak it. Everything I found and everything in Found is about what I felt, discovered, put together while reading through the scrapbook. I never asked my father to translate or explain anything he put in there. That belongs to him, even the questions themselves. What I wanted most was to protect my parents, to respect and honour their private and personal experience. I wanted to tell our story but not to exploit or polish it or get caught up in the sadness that could have been there. Found is about where I came from and am coming from and what I can do with that. It’s also about what I want from poetry and life itself. How poetry has the capacity to do so much with so little, but more than that, how a life can go far and wide and deep even when given so little. And that’s when it stops being about my father or about me but about all of us.

I’ve been very taken with the “Falling in Love with Poetry” pieces that TNQ has been including in various issues over the past little bit [I even wrote my own here], and the one in this issue, “Rink at the Foot of Parnassus,” by Jeffery Donaldson, is no different. Writing about entering writing through hockey, here’s how the short piece ends:

Now that thirty years later I have a library of poetry and not, I don’t think, a single book on hockey, would I be justified in saying that the tables have turned? Not really. For one thing, I think the scenes of childhood show up in our thoughts and behaviours more and more centrally as we age. But I also think that, to judge fairly by some of my recent poems, the game has picked up on the lessons once evinced by those three volumes of Robert Service on the family bookshelf: be patient, give way, and you will abide.

Toronto ON: Brick: A Literary Journal [see my note on a much earlier issue here] is one of the few magazines/journals I can say I truly cherish (when will I ever become brave enough to submit something?). Now with their 80th issue, it features interviews with Mavis Gallant, Barbara Gowdy and Gil Adamson (in conversation with Michael Ondaatje), as well as various other of the usual and unusual features that make Brick such an interesting read. How do they keep finding such magnificent material? New poems by Sharon Olds and Don McKay, some love letters by Graham Greene to his mistress, a short piece by Eleni Sikelianos on a photograph of Robert Creeley and Robert Duncan, a strange piece of fiction by Leon Rooke and a piece by Robert Hass celebrating Tomas Tranströmer, among other pieces.

Michael Ondaatje: […] How long did the book take you to write, altogether from when you began?

Gil Adamson: Ten years. I started ten years ago, and that makes it sound like I’m the slowpoke from hell, but I did produce other things in between. I produced a poetry book and I sort of half-wrote another novel, so I would drop this project for periods of time. There was a time when I stopped writing for about two years. I just had no interest in being a writer, but this project was always in the background and it was sort of the fun project that I liked to do. And really, for the last four years, The Outlander has been my only project.

MO: Did that two-year silence help you?

GA: Yes, I loved it. Sometimes you just want to be a normal person, forget it for a while. Once or twice I suspected my life was kind of purposeless. But I was fine with it, I always had faith I’d get back to writing, and when I did it was a pleasure and not a chore. I don’t know how many will admit to that, but I think it happens.

I don’t know how they got it, but this issue includes the most amazing memoir by the late Dr. Gregory Altschuller (d. 1983), writing about being a child in Checkhov’s house. It’s the sort of piece that is easily gone over and over and through multiple times.

I don’t remember Chekhov. I saw him. I was often in his house, but as a child, and my memory does not retain his image. I spent many hours in his house, in fact, many days. When I got measles, it was thought only natural that I should be moved to the Chekhovs’ to keep me away from my brothers; and there, in a big guest room downstairs, with a famous portrait of Pushkin on the wall behind my bed, I spent more than a month under the stern but kind supervision of Chekhov’s sister, Maria Pavlovna. My sister also went promptly to the Chechovs when, in her turn, she got erman measles. The big downstairs guest room must have been occupied, because she slept on the sofa behind Chekhov’s desk.

The first thing I remember vividly is the day my father brought us a book written by Chekhov.

The book, a wonderful dog story, I kept through all the years of my émigré life, and it is now in the possession of my children and grandchildren.

I know so well the world Chekhov lived in during the last years of his life. Not the great world of literature, theatre, and worldwide fame, but the small world of a little provincial town, the now-famous Yalta, and the still smaller circle of the Chekhov family, which was so infinitely close and dear to my father and, through him, me.