For Carson and Sartre
shame is fleeting; a blink
that can’t survive the lack
of other people’s judgement.
Isn’t being alone a shame?
For Schopenhauer freedom
can only exist when you’re
alone with a French poodle.
We leave the goblet half full
when the god stops the rain.
The rain god peels an orange.
At the food court my brother
shames me for sleeping with
an enemy. I steal his red shirt. (Rebecca Rustin)

Vancouver chapbook publisher Rahlia’s Ghost Press celebrates its fourth season of publications [see my reviews of their third season titles, second season titles, first season titles] with three new poetry chapbooks, all of which are debuts by each of the authors: Rebecca Rustin (Mercy Tax, 2019), John Elizabeth Stintzi (Plough Forward the Higgs Field, 2019) and Cara Nelissen (Pray For Us Girls, 2019). The lyrics in Montreal poet and translator Rebecca Rustin’s debut, Mercy Tax, are composed with an urgency, each constructed as an accumulation of direct statements that build to crescendos. Her poems rage and flail and call out, seeking and even demanding beauty and answers and possibility, despite all that might impede, or make difficult. As she writes to end the poem “WHAT THOU AND I DID, TILL WE LOV’D”: “I want to change / I want to change / Into a strawberry / Into a disco ball / Into a points machine / Into a bathysphere / Into a snowball gun / My own sweet little rhymed murder mystery [.]”

Originally from northwest Ontario, John Elizabeth Stintzi is currently a resident of Kansas City, and the author of the novel Vanishing Monuments (Arsenal Pulp Press) and the poetry collection Junebat (House of Anansi Press), both of which are forthcoming this spring. Their debut chapbook, Plough Forward the Higgs Field, is composed as a single-poem sequence, a meditation on farming, family and science, writing a connector between their farm upbringing and experience and the science of “CERN’s large hadron collider.” “the self itself an acceleration,” Stintzi writes, “of basal parts colliding / into a magnetic array / of sensation on a graph // the map of the arc / of the uncut hay / swaying in the wind [.]” 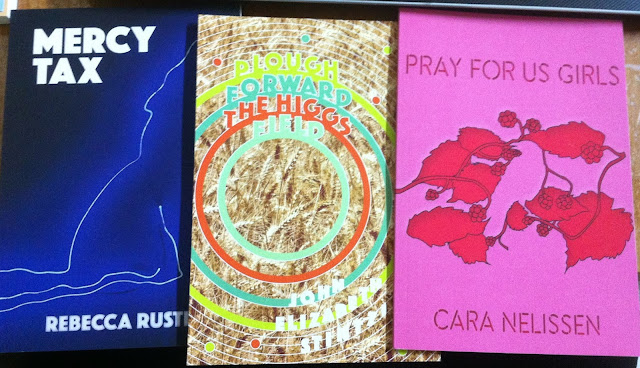 Cara Nelissen is the only name in this trio I hadn’t heard prior to this, and she is currently an MFA student at the University of British Columbia, the Reviews Editor at PRISM International and bass player for Vancouver rock band Swamp Romance. Her debut, Pray For Us Girls, is a curious mix of first-person narrative prose and poetry, short lyrics and lyric sequences, writing out a series of extended, meditative sentences that work to balance, and centre, a sense of calm against the chaos. The poems in this collection are intriguing, and particularly strong, as the last poem in the three-poem sequence “FACTS ABOUT CROWS” reads:

I take charge of my own destiny by attending an East Van warehouse party where everyone is wearing masks and dating each other.

I get too drunk, but decline when someone offers me acid. I will spend the rest of the week telling my friends how mature I think this makes me.

Before she kisses me, a girl in purple sequins tells me I remind her of her favourite ex.

I think about all the people who met their soulmate at a party they almost didn’t go to.