Isabel Sobral Campos, your person doesn’t belong to you


Then wet fog
under enforced skirts

clings to the open
pit between my legs

Fog roams wetting
my dried interior
blowing up the skirt’s
dimension into a single
alien curve,

the sagging dip of
its wetness on the
weighted hair

me already in
swampy
earthiness

As part of producing her most recent chapbook through above/ground press, I’ve been going through other titles by Cambridge MA poet and editor Isabel Sobral Campos, including her full-length debut, your person doesn’t belong to you (Vegetarian Alcoholic Press, 2018). Campos’ your person doesn’t belong to you works through lyric fragments around details of Joan of Arc and the 1928 film, as she writes to open the collection:

Jeanne d’Arc was only nineteen years old when she was burned at the stake in the city of Rouen on May 30, 1431. After months of interrogation by an Inquisition court, she agreed to forego her preference for men’s clothing and publicly recanted her visions of St. Margaret, St. Catherine, and St. Michael. For this, the Maid of Orléans was initially spared death and instead condemned to perpetual imprisonment. But on May 28, after learning that she had once again donned a soldier’s garb, the judges confronted Jeanne in her cell. Her concessions, she told them, had been a mistake and she withdrew her earlier recantation.

In 1928, Carl Dreyer directed a film about Jeanne d’Arc, La Passion de Jeanne d’Arc. This fragmented and discontinuous work relies on transcripts of the historical trial and features repeated and prolonged close-up shots of Jeanne’s face, famously played by Renée Jeanne Falconetti. Two fires in different cities destroyed original versions of the film. It was presumed lost until 1981, when an employee of a mental institution in Oslo discovered yet another version of the original store in canisters within a janitor’s closet. 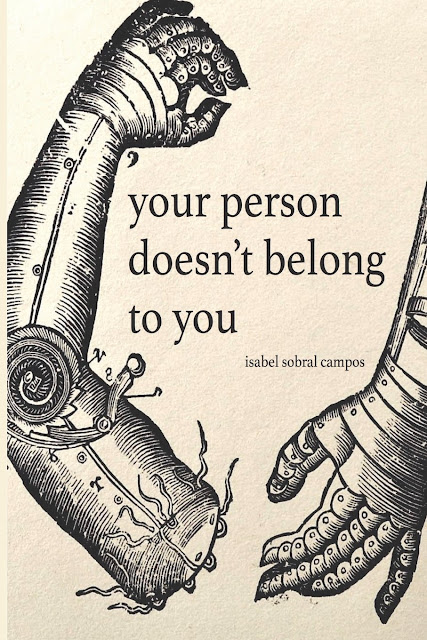 Inspired by the remaining fragments of the classic film, Campos writes her own fragmented portrait of Joan of Arc, collaging the film’s depiction of Joan against the historical figure displayed through the original transcript of her trial, writing her as a pastiche, from holy warrior, hallucination, compassionate truth to scripted image. Campos’ collection relies on the fragment, the fracture and the multiple perspective, shifting constantly back and forth between the two poles of historical record and the classic film, with an array of mythologies, facts and broken and half-truths that lay in that impossible middle. The poems here are electric, and collage into a portrait that refuses, deliberately, to hold still, but one that still manages to cohere into something, something. As she writes as part of the poem “Biography,” towards the end of the collection: