The Lover in Winter Plaineth

on the outskirts. I cannot see
to the edge. I creep

again to my niche. I sleep,
fingers triggered
from touching the keys.

Alders wave the river smell
into the hangar. I kneel again to scrape
gilt from illuminations

creep. An orchard could be
in the light at the end of the open hangar
I cannot see to the edge.

I copy what the dead sang
about the fangs of the wind
though the wind has been defanged.

The piles. The outskirts.
I creep. I sleep. 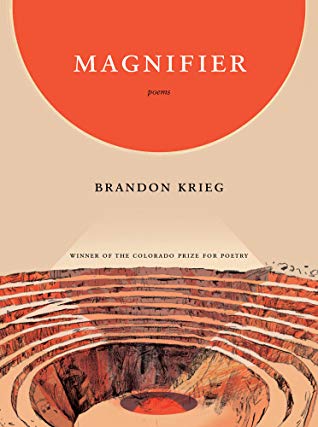 Pennsylvania poet Brandon Krieg’s third full-length poetry title, winner of the Colorado Prize for Poetry, is Magnifier (Fort Collins CO: The Center for Literary Publishing, 2019), following his collections Invasives (New Rivers Press, 2014) and In the Gorge (Codhill Press, 2017). The poems in Magnifier are lyric descriptions of ecology, geography and nature, composed through the lens of a loss of ecological innocence. What remains, his poems question, and how can one continue? Krieg’s descriptive passages are stunning, such as this excerpt from the poem “Arrival at the Complex,” a poem that opens: “Over the rutted high road of this / preserve, wide white / contrails converge, dimensioning / a cloudless vast wash / above snow-battened grass: crisscross stalks, // some pressed, some melt-released, conduct acute / sun-slant down tangent / conduits—pattern / circumscribed like / Potawatomi basketwork in a museum by / four roads’ roar, / township, county, / principality, continually / appearing in satellite photographs, proving here // is a gray rectangle of hectares containing / two kidney-shaped lakes / adjascent to the new / tech park, commissioned to manufacture hope / in this corner of the one / state so beleaguered it lost citizens / in the last census.” There is such a directness here, even amid such a lush and thick lyric, one that sways and sacheys alongside and including such a straight narrative thread. Krieg magnifies, explores and critiques landscapes and our own responsibilities to them; to those spaces, and to our own desctructive efforts. At times, there is even a dream-quality to Krieg’s lyrics, floating across the page even as he demands we pay better attention for what it is we are losing, and have already lost, as he writes in the poem “Comedy of Mirrors”:

come to rest in an ovoid pool under the structure
erected at the meridian of the fourth and fifth ice advances,

whose columns are a succession of ice cores dissolving,
overawing the dams, the audience
wears the masks

neither cosmic nor tragic but comfortable with the holes cut
for screen’s light to access the eyes.