A Child to the State

The way to do history
Is not to care about it
Whatever you care for you diminish
Facts remain the same, changing with the day
While what is true of one repeats
By turning true of another
Everywhere the sound of crying
Neither immediate nor interesting
Unlike you, with those low goals
You’re not just going to overflow toward
You’ve got to list the ambitious pains
Persevere through the doubt you watch
Take inventive forms like clouds
Owing the world a form

Brooklyn poet Jacqueline Waters’ third full-length poetry title—following A Minute without Danger (Adventures in Poetry) and One Sleeps the Other Doesn’t (Brooklyn NY: Ugly Duckling Presse)—is Commodore (Ugly Duckling Presse, 2017). Commodore is a masterfully-stitched together collection of lyrics, fragments, accumulations and prose-poems focused very much on the immediacy of her America, and what it means to be a citizen (a subject that has expanded and even exploded over recent months), including the rights, responsibilities and possibilities of citizenship. As she writes to open the poem “Don’t Be Upset If You Don’t Hear from Me”: “Ranchers lease land from the government / At very low rates / That do not make up for the money spent by the government / To manage the land for the ranchers [.]” Or, further on, as the opening of the extended poem “The Pentagon” reads:

A person has to live with the facts.
Say something critical—
tell everyone, for instance,
that you find your boss eerie
or a hypocrite, and it’s you
who’ll be associated
in your listener’s mind
(more or less forever)
with eeriness, and with
hypocrisy. 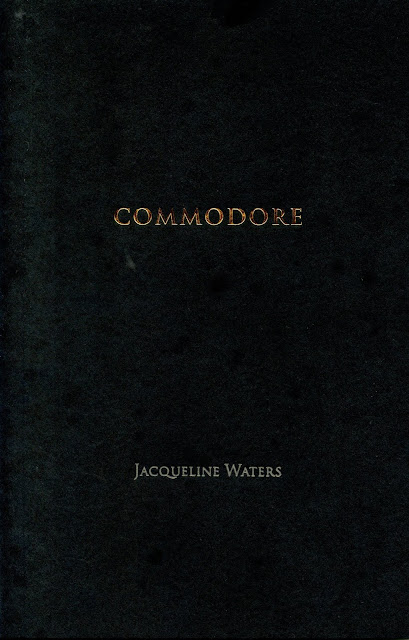 The poems in Commodore move quickly through a contemporary landscape of western ideas and ideals broken down, mangled and set aside in favour of something entirely other, something that sets culture and community down an entirely wrong path. Waters’ poems unpack and critique both government and social action as well as inaction, and questioning the possibilities of personal responsibility in society generally, as well as specifically, against such dark forces. There is something reminiscent in Waters’ work of Erín Moure’s similar workings on the idea of the citizen (think of her 2002 title O Cidadán, for example), and Waters has accomplished something quite remarkable here, composing poems that interrogate, question and reveal without forcing any shortsighted or easy answers. Her poems champion the absolute necessity of asking the right questions for the sake of saving everyone. Near the end of “The Pentagon,” she writes:

She told him she would have to think about it. Meanwhile she was counting on him to keep her posted. He left her office with the sense of a decision having been made. He cleared some papers that had been left on his chair. It was supposed to be a paperless office, but occasionally it was there: paper.

If a teacher can lead a student to contradict herself, then the teacher’s point is strengthened. Classic Socratic method.

It seems to be about asking questions, but its real purpose is to create confusion, to reveal internal contradiction and elicit self-doubt in the student.

But the student must interpret the feeling of losing an argument as self-doubt.

The presence of self-doubt as wherewithal to grow.