Far from the cityscape. Divets on terrain where our bodies make arcs in the sand. Smell of stale popcorn, beer burps, weariness cast off at the edge of the city last stop. Coney Island.

[…] is the founder of Parachute Literary Arts, an eight-year-old arts organization whose straightforward (and wonderful) mission is “to celebrate the literature of Coney Island.” For the unfamiliar, Coney Island—not actually an island, though it was before local residents filled in the inlets separating it from the rest of Brooklyn—is a strip of beach on the southern shores of Brooklyn, legendary for its seaside boardwalks, old-school frankfurtiers, and amusements that include the iconic Cyclone roller coaster and the Parachute Jump, which closed in 1964 but remains the most visible physical monument to the neighborhood’s history as New York City’s summertime playground. 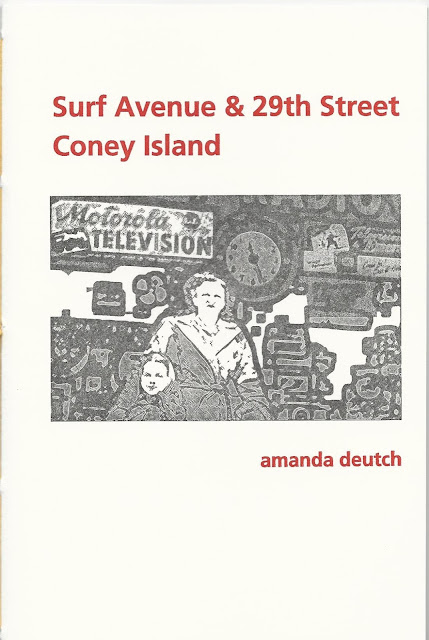 Over the years, Coney Island has received an enormous amount of literary attention (Lawrence Ferlenghetti’s 1958 title A Coney Island of the Mind being but the most overt of the examples I’m aware of), but Drieblatt’s interview continues, offering that, as Deutch responds, “Coney Island also has a personal significance for me. My mother grew up in Coney Island, on West 29th Street between Surf and Mermaid, along with her brother, father, and mother.” Deutch’s Surf Avenue & 29th Street Coney Island, then, offers a lyric collage that shifts between and amid theme park and family, whether blended together into singular idea, written as separate threads and even offered as contradictory effects. As she writes:

Beyond shards of memory
Stories told in a homeland tongue

upside down
a family

Hers is a lyric of theme park and working class roots, and New York histories both public and personal, much of which has faded away into memory, and much of that fading as well.

An arcade, an arc, gallery, walkway beeping with mechanical sounds Hit em Hard, Hit em Hard, I’m Popeye the Sailor Man goes the song of the High Striker on West 12th Street deep into the night. A jungle of stuffed tigers with Mardi Gras beads crouch at the High Striker’s base ready to pounce. Monica who runs the game, her hair changes color every week with the tides. Half pink half blond, today. She fights for her space on West 12th Street, claims her turf between the Ghost Hole and the Wonder Wheel laden with tigers and inflatable pirates

I’m curious to know if this is part of a larger work-in-progress, her fragments gathering together to form a whole that seems unfinished, even incomplete. There seems a great deal more material to be gathered around such a project, and it does feel that Deutch has barely scratched the surface. There is also something around the last few pages of the short collection that feels unfinished as well; while one doesn’t necessarily wish for a “conclusion,” there is something of the final few pages that don’t quite push far enough to hold the fragments together. Perhaps this, itself, is worth pushing this project into something book-length (which might already be in-progress, but unknown to me)? And yet, in certain ways, such an excavation/historical project involving memory, combining collective and familial, could potentially be life-long.

misleading me along my family tree