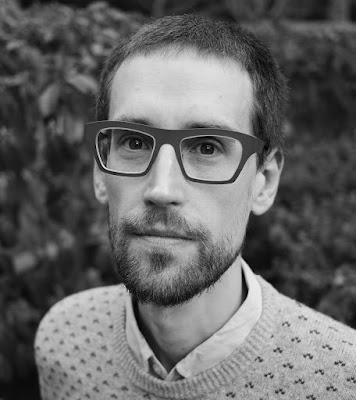 Nicholas Bradley is a poet, literary critic, and scholarly editor. His first book of poems, Rain Shadow, was published in the spring by the University of Alberta Press. A chapbook, Five Sudden Goats: Rocky Mountain Poems, was published by the Alfred Gustav Press in 2016. He lives in Victoria, British Columbia, and teaches Canadian literature and American literature at the University of Victoria.

1 - How did your first book change your life? How does your most recent work compare to your previous? How does it feel different?
My first book is an encouragement to keep writing, I think. It gives me hope and a little confidence that what I’m writing now might become a book as well, and whatever will come after that. My life hasn’t changed, but I feel that I have some licence to keep going. I’ve noticed a shift in style in my most recent, unpublished writing, but whether that difference will be obvious in time, it’s too early to say.

2 - How did you come to poetry first, as opposed to, say, fiction or non-fiction?
I’ve never been tempted to write fiction, though I enjoy reading novels and stories, whereas the precision and clarity of certain poems makes me want to try my hand at poetry. And sometimes the imprecision and the lack of clarity in poems—but always the close attention to words and sentences, as opposed to the narrative structures of fiction.

3 - How long does it take to start any particular writing project? Does your writing initially come quickly, or is it a slow process? Do first drafts appear looking close to their final shape, or does your work come out of copious notes?
I’m a very slow writer, I think. I don’t make many notes for poems, but the first attempt doesn’t usually look like the finished poem. It usually takes me a long time to finish a first draft. I might write a few lines and then set the poem aside for a few days or weeks. Sometimes the idea for a poem comes quickly, but the words rarely do.

4 - Where does a poem usually begin for you? Are you an author of short pieces that end up combining into a larger project, or are you working on a "book" from the very beginning?
I think of writing individual poems rather than a book, at least at first. As poems start to pile up, I can begin to see connections and then to imagine what a book might eventually be. Poems tend to start when I’m walking somewhere alone.

5 - Are public readings part of or counter to your creative process? Are you the sort of writer who enjoys doing readings?
I enjoy readings, but they’re not part of the process (if there is such a thing as a process). The sound of poems is extremely important to me, but I prefer to figure it out in the privacy of my own home, as it were.

6 - Do you have any theoretical concerns behind your writing? What kinds of questions are you trying to answer with your work? What do you even think the current questions are?
The main concern is how to write a good poem, which I think is always both a theoretical and a practical question. (What “good” means is also a good question.) Otherwise the current questions resemble all the old ones. What does it mean to live in a particular place and time? How do we praise what we love and mourn what we have lost, or will lose? Everything is a variation on a theme, but there are endless variations, and sometimes the music is played so well that listeners believe that they are hearing something entirely new. Of course, I do have particular interests as a writer: environmental change, the Pacific Northwest, wilderness, philosophy, and mythology—to name just a few.

7 – What do you see the current role of the writer being in larger culture? Does s/he even have one? What do you think the role of the writer should be?
Above all, to write—to make art with language. Writers can play many other roles as well, and usually do, but writing is the necessary, defining task. I wouldn’t want to speak for others, but in my own case I hope that the writer can offer a different way of seeing the world. Teaching and delighting are ancient and still worthy aspirations.

8 - Do you find the process of working with an outside editor difficult or essential (or both)?
Essential, so far. I worked with Peter Midgley and especially with Alice Major to edit Rain Shadow. Peter and Alice are superb writers and editors. Alice made specific suggestions that helped the book find its final form. I’m very grateful. It’s hard for me to imagine any draft that wouldn’t benefit from another reader’s suggestions.

9 - What is the best piece of advice you've heard (not necessarily given to you directly)?
Read everything.

10 - How easy has it been for you to move between genres (poetry to critical prose)? What do you see as the appeal?
In part the appeal is that when I get stuck on one thing, I can move to another. There’s always something else that needs attention. I write more critical prose than I do poetry, but I see both genres as part of the same project, more or less. Some prose is more technical and less essayistic—bibliographical footnotes, for example—but I see both critical analysis and (for lack of a better term) creative writing as ways of responding to other writers and their ideas, and to the world that has shaped their imagination and mine.

11 - What kind of writing routine do you tend to keep, or do you even have one? How does a typical day (for you) begin?
My teaching schedule sets the rhythm of my weeks, and I find blocks of writing time where I can. Ideas for poems come when they come. I’ve written quite a few poems in airports and on planes. I used to be a late-night writer, but parenthood put an end to that—for the better, I think, in terms of the writing itself. A typical day begins early with coffee and a bit of work.

12 - When your writing gets stalled, where do you turn or return for (for lack of a better word) inspiration?
I almost always have some other work to be doing, so if I’m not making much progress with one piece of writing, then I turn to another project. I try not to force a poem into existence. It’s not as though there aren’t enough poems in the world already. When it happens, it happens (and I’m always thankful when it does).

13 - What fragrance reminds you of home?
Wet oak leaves.

14 - David W. McFadden once said that books come from books, but are there any other forms that influence your work, whether nature, music, science or visual art?
All of the above, I suspect, and more. My poems are often responses to particular places or elements of the natural world or scientific ideas. I’m sure that I’m not entirely aware of some influences, too.

15 - What other writers or writings are important for your work, or simply your life outside of your work?
Whatever I happen to be teaching tends to be the most important at the time. And I review books regularly. This means that I read fairly broadly (for reviewing) and that I reread constantly (for teaching), which seems to be a useful combination. Much of what I read is twentieth-century and contemporary poetry in English, but turning to my shelf, I spy a book of photographs called Yosemite in the Fifties, Robert Macfarlane’s Landmarks, and The Complete Guide toCross-Country Ski Preparation. I like to be outdoors while indoors.

16 - What would you like to do that you haven't yet done?
Write Al Purdy’s biography. Learn more languages.

17 - If you could pick any other occupation to attempt, what would it be? Or, alternately, what do you think you would have ended up doing had you not been a writer?
When I was very young, I wanted to be a park ranger. I still think that was a good plan.

18 - What made you write, as opposed to doing something else?
I’m not sure. At some point it became a habit. What makes me want to write now, I think, is the desire to do it better—to get right, or closer to right, what I’ve previously attempted to say, and to think more clearly about ideas that remain with me. And to respond to new experiences and new ideas.

19 - What was the last great book you read? What was the last great film?
The last great book that was new to me was probably Barbarian Days: A Surfing Life, by William Finnegan. It’s a wonderful memoir and one of the most intimate accounts of the ocean I’ve read. I’ve been reading new editions of Canadian poetry—the collected works of Alden Nowlan, Daphne Marlatt, Fred Wah, and others. They’re great in various ways, but I knew much of the poetry already. I’m trying to remember the last film I watched, and I’m drawing a blank. I need recommendations!

20 - What are you currently working on?
The next book of poems, a messy first draft of which is almost finished.

Posted by rob mclennan at 8:31 AM
Labels: 12 or 20 questions, Nicholas Bradley, University of Alberta Press