we’re in a greyhound station in baltimore w/ an hour to kill, staring at the tv. cnn is in love w/ the bombing of the boston marathon, and cnn is in love w/ 165,000 new jobs, 165,000 new jobs, 165,000 new jobs. they zoom in to their analyst who’s been staring at the mayor’s face. i can see the mayor’s tears, he says, the mayor means it. he’ll make a wonderful ronald reagan some day, just as the last four presidents, just as the president today who picks up your phone—anybody there? anybody says “my dumb life” but in the station and on the bus nothing rings and nobody means a thing, so we’re a tribe. it’s communism, calm as a yawn til the next city, where we’ll be sucked out and dispersed by vacuums of identity. finally we board. the man next to me asks if i can watch his bag. sure i can. (“chase scenes”)

Philadelphia poet Ryan Eckes’ latest poetry title is General Motors (Split Lip Press, 2018), a book, according to one author bio, that is “about labor and the influence of public and private transportation on city life.” As he wrote as part of an interview forthcoming at Touch the Donkey:

I was writing poems that blur easy distinctions between “public” and “private” realms and trying to undermine the U.S. myth of rugged individualism. 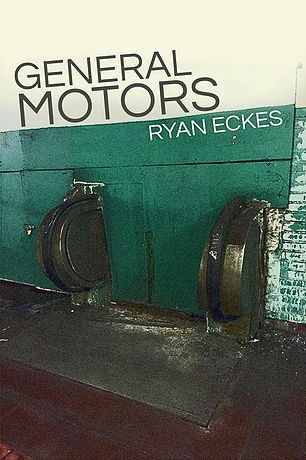 Mythmaking is powerful, and the machinery that continues, relentlessly, to enforce the American mythology is quite a thing to take on. Constructed in three sections of extended prose sequences—“chase scenes,” “spurs” and “strikes”—the poems are composed through a working-class lens, writing prose poems engaged with both formal experiment and social engagement, blending research and personal knowledge of the hardscrabble industry of Philadelphia. While reminiscent of works by contemporary Vancouver poets such as Stephen Collis, Christine Leclerc and Jeff Derksen, it’s as though Eckes is actually channeling the late Nanaimo, British Columbia poet Peter Culley [see my obituary for him here], writing his Philadelphia in a similar way to how Culley wrote out his “Hammertown”: writing industry, personal history and social commentary, much of it critical. As he writes as part of the longer prose-poem “Northeast spur”:

To reduce the number of accidents, the Philadelphia Parking Authority started a “Red Light Camera Program” that issues $100-tickets for blowing a red light. The program has resulted in huge profits for a private camera company in Arizona. It has not made the city safer.

The American solution to a public problem, created by private industry, is usually to find a new way to steal from the public. Robbing your neighbor, in other words, is an American tradition, and it thrives in Northeast Philly, where people live as if their neighbors do not really exist. Believing in the American dream is a way to deny your own existence.

While General Motors might be a logical extension of considerations present in his first two poetry collections—Old News (Furniture Press, 2011) and Valu-Plus (Furniture Press, 2014) [see my review of such here]—there is something that coheres in this collection that wasn’t present before, marking a critical seriousness and lyric expansiveness that is far stronger than simply the sum of its parts. It is as though everything he’d been working on previously has come into an incredibly sharp focus. Further in his Touch the Donkey interview, Eckes writes:

I’ve always liked the idea of a book as a book—as all one piece—rather than a “collection” of standalone poems. I think of poems in relation to other poems, and in relation to non-poetic material. This is because of Philly, too. Advanced Elvis Course by CAConrad, for example, will change how you think. And becoming a poet in Philly in the 2000s, in the post-9/11 era, changed how I think. It radicalized me for sure. I learned far more about history and politics from hanging out with poets in bars than I ever did in school. That is not an exaggeration. And I think it’s because of knowing poets like CAConrad and Frank Sherlock that I so often go back to influences from the 60s-70s-80s—Amiri Baraka, Diane di Prima, Allen Ginsberg, Audre Lorde, Ammiel Alcalay, and so on.