Nothing makes nothing happen. That was true
along McGregor Street in Montreal and in
a certain woman’s weary heart this side of
the Selkirk mountain range. You must have seen
nothing or perhaps the tree full of it in our
back yard. When I first saw a single cherry tree
in a back yard I did not understand it;
cherry trees grew very high in my childhood, in
groves, cool shadows between them, eyelids
of beautiful women should be so cool. If you
have a single cherry tree in your back yard, change it
to a pear tree in your stories. (George Bowering) 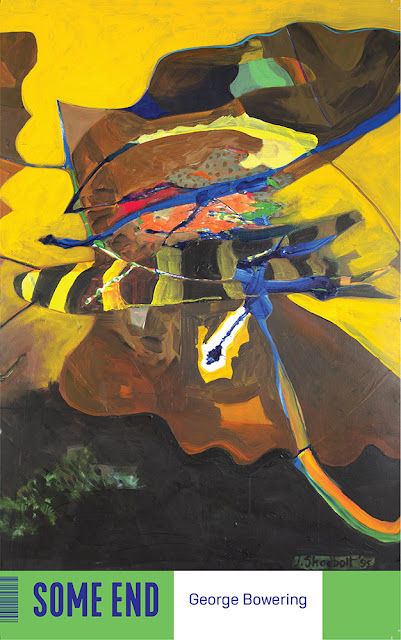 I find this new double collection by Vancouver poets George Bowering and George Stanley fascinating, a dos-à -dos flip book made up of Bowering’s “Some End” and Stanley’s “West Broadway”(Vancouver BC: New Star Books, 2018). With each section running roughly forty pages in length, both Bowering and Stanley write in and around their Vancouver geographies and concerns, from aging—Stanley’s “Blood is toxic to the retina” from the poem “5,” or Bowering’s “Does it bring any solace or calm to you / to know the sun is mortal, too?” from “Bright”—to  the ins and outs of reading, friends and their immediate locales. Around 2005 or so, I heard the two illustrious senior Canadian poets read together at a festival in Vancouver alongside George Elliott Clarke, and the three Georges were fascinating to watch in sequence, given their individual penchants for deep rhythms, and their reading habits of each conducting their readings with one hand.

The two sections do hold to each other in conversation, continuing their individual trajectories from decades of work that also discover the places in which they meet, and overlap, from Stanley’s “Letter to George Bowering” that responds to Bowering’s “Letter to George Stanley,” or Bowering’s “The Country North of Summer,” a poem that plays off a combination of George Stanley’s North of California St. (New Star Books, 2014) [see my review of such here] and Gentle Northern Summer (New Star, 1995). Curiously, the poem itself doesn’t engage with Stanley directly, but is instead a meditation to and for the late Al Purdy: “The grave wherein my pen pal is laid lies / at the bottom of a country road saying his name. / It’s a dandy place to lean against the stone book / and read a bunch of poems, except in winter.” Bowering, through dozens upon dozens of works of poetry, fiction and criticism, has been a frequent responder to and commentator upon the works of others, from contemporaries to mentors to heroes and anyone else whose work might cross his path and connect, and his section includes numerous threads and structures familiar to anyone who has spent time with any of his prior work. Much can be said also of George Stanley’s “West Broadway,” a section that opens with an extended sequence, “West Broadway,” stretched across a specific thread of Vancouver geography:

This river runs both ways.

West it flows (up its tributary Tenth Avenue)
to the ‘uni’ (as I’ve heard one Ontarienne call it).

East it goes to the ‘Anti-city’ (Scott’s word)
& a former city planner says
downtown business interests placed obstacles in the way
of development along central Broadway, seeing it
as a potential rival. From the late ‘50s, it becomes
Vancouver’s doctor-and-dentist-land.

Panoramic vista – 19th floor of the ‘electric razor building’:
North Score mountains & the city glittery like a magic island
from the hygienist’s chair, until she tips me back.

As far as Stanley’s responses to other poets, his suggest influences that go far deeper through his own history as a writer, composing a poem after a specific piece by Baudelaire, and multiple poems after Anna Akhmatova, such as his “Our Age (an imitation),” that begins:

Why is this age worse than all those preceding?
Because deranged by greed and desirous of pleasure,
we borrowed against the cancer that was eating us,
the wound we could not close.

Some End/West Broadway is an intriguing conversation between these two senior Vancouver poets who have been friends for decades, and poets for far longer, writing towards each other in such a way as to highlight their shared sensibilities, as well as their differences.